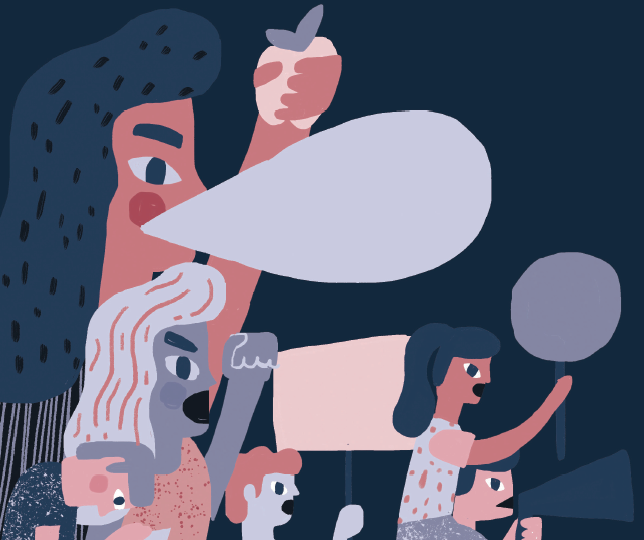 A Texas-sized brawl has broken out over special education in the state and all sides are blaming each other for the massive problem.

Stuck in the middle are many special-needs children who suffer a lack of proper education because parents are unaware of their legal rights, experts say.

The feud started when the U.S. Department of Education blasted Texas for failing to properly educate students with disabilities. A year-long investigation found that the Texas Education Agency capped the number of students who could receive special education, and encouraged public school districts to deny services.

The federal government accused school districts of “dereliction of duty,” noting that Texas has one of the lowest rates of special education students in the country — 8.6 percent as of 2016. The report immediately touched off the finger-pointing.

Two veteran and well-respected educators agreed to share with RGVision their candid views on special education, but only on the condition of anonymity. One is a well-known expert in the field of special education; the other an accomplished schools superintendent of several decades.

“At that time, the state’s average in special education was 11.6 percent,” she said. “If school districts were found to be over this percentage, it could lead to an audit by TEA and in most cases require districts to provide additional documentation to explain why services were not at appropriate levels.” 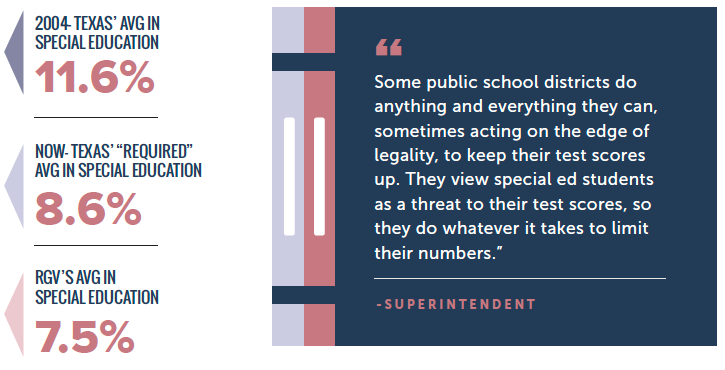 As a result, the expert said, many school districts began to decrease their special ed populations and potentially failed to appropriately identify students for special education.

“Eventually, Texas came under severe scrutiny from many angles,” said the superintendent.

“It all comes down to federal and state test scores,” he said. “Some public school districts do anything and everything they can, sometimes acting on the edge of legality, to keep their test scores up. They view special ed students as a threat to their test scores, so they do whatever it takes to limit their numbers.”

He said the test scores are all-important to school districts because if they fall low enough, according to the federal No Child Left Behind law, school districts can lose local control of running their schools and purse strings.

Schools, including charter schools, can even be closed down because of low scores, he said.

“There are all kinds of special needs. It can be speech impediments, visual issues, emotional disorders, the list is long.”

Some special ed services require one-on-one teacher to student teaching, all of which can become quite expensive for public schools, another reason many of them see special education students as added costs to their operations.

“Behind closed doors, some educators tend to look down on special education students,” he said. “They’ll call them derogatory names. Some may look the other way when special ed students are bullied by other students. But if you’re the parent of a special ed student, you want the school district to do everything it can to protect and educate your child properly.”

According to TEA data, the Rio Grande Valley’s rate of special ed students is 7.5 percent, even lower than the state’s low average.

When the U.S. Department of Education sent representatives to Edinburg to hear from parents of special ed students, they got an earful.

Parents accused schools of not knowing, or ignoring, laws pertaining to special education, and of spending too much money on sports, public relations and other non-classroom activities, and not enough money on special ed. Spanish-speaking parents criticized school officials for not providing translators to help them advocate for their children.

Still others said they were heartbroken when school administrators “lawyered up” and parents suddenly realized the school district was “not there to help us.”

According to the superintendent, some school districts take advantage of parents who are ignorant of their rights.

“Parents have lots of power, and school districts know that,” he said. “Parents even have a large and powerful lobbying group. But if parents don’t know their rights, school districts tend to ignore those parents and the needs of their children.”

Even though federal law is on their side, he said parents don’t fight school districts for the special education they’re entitled to for two reasons: they are ignorant of the law, and they don’t have the money to fund a legal fight.

“That’s why school districts aren’t afraid of lawsuits filed by parents,” he said. “School districts have massive amounts of taxpayer money to hire lawyers to fight their battles. But parents don’t have unlimited funds. If the playing field were level, school defendants would have to pay legal fees out of their own pockets, or districts would fund parents’ legal fees. You can bet things would change immediately.”

So what’s the solution to sufficient special education in Texas? Both experts say protecting students is difficult, but one way would be for new federal laws to ensure compliance oversight.

“Everybody knows TEA just doesn’t have the resources to keep a close eye on school districts’ special ed compliance,” the superintendent said. “School districts know that, and in some cases, take advantage of that. And too often, school districts are tipped off about when TEA will be coming to inspect, or audit, them. This allows districts to prepare and make themselves look better to auditors.

He said school districts should have no idea when an audit is coming.

“School districts need random compliance audits,” the superintendent said. “Random audits by either the feds or the state would take care of a lot of the problems in special ed in Texas. ISDs respect audits; they are afraid of them. But right now, they do all they can to avoid them. Well-funded, random audits would go a long way toward fixing the special education problem in Texas.

In response to Abbott’s scathing criticism, TEA has released the draft of a corrective action plan. The agency claims the plan addresses “all issues identified in a recent federal monitoring report, including the proper identification of special education students and assuring access to appropriate services at the local level.”

The plan includes outreach efforts to educate parents about their rights, a professional development system and follow-up support, compensatory efforts for students who were denied services, and increased staff and resources to provide on-site support and oversight.

Public comments will be accepted before a final plan is submitted to the U.S. Department of Education for implementation.

Comments will come from special education students, families, educators, advocacy groups, district and school officials and “all others seeking to provide input on the plan,” according to a TEA news release.

For more information, visit the TEA website at https://tea.texas.gov .