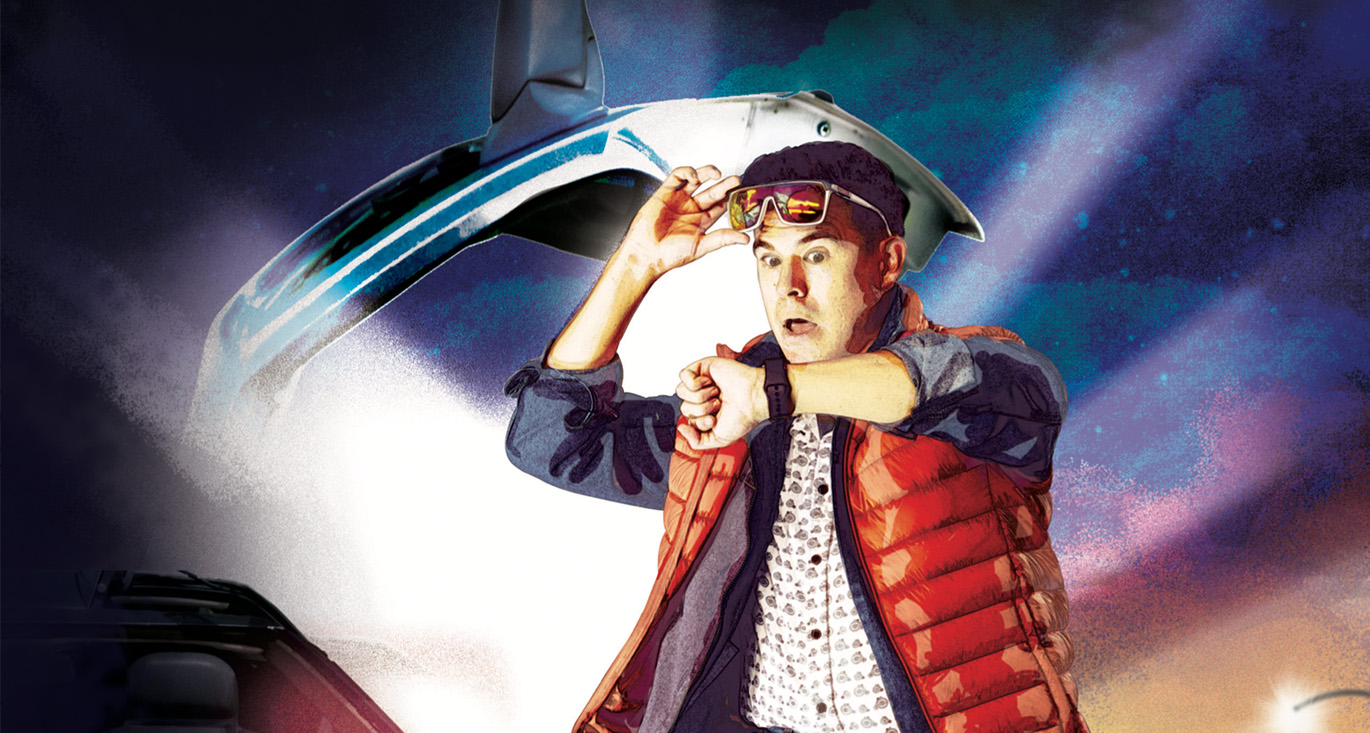 The drive home from San Antonio to the Rio Grande Valley can be long and boring. For many, cruising alone through endless miles of desolate ranchland creates hours of mental gymnastics, including introspective “think time.”

But when Gabriel Puente made the four-hour trek in 2008, his mind was in a cold-sweat crisis. He was consumed with paralyzing fears and doubts about his future and whether he could pull off his plan to start a business in the Rio Grande Valley.

Then, “clear as day, out of the blue,” as he puts it, a voice he’s convinced was God interrupted Gabe’s prayers to soothe his anxieties and extinguish his fears.

“I had been thinking that I wouldn’t be able to get this magazine off the ground,” said Gabe, the CEO and president RGVision Media, now celebrating its 10th anniversary.

Until that moment, Gabe had every right to be fearful. He had quit a high-paying executive position with a publishing firm in San Antonio, had no savings to speak of, and no idea of how to buy his next meal or continue paying his bills, let alone to start a business.

On a high wire without a net, he took a giant leap of faith and crammed all his earthly belongings in his car and headed home with just his vision of a magazine.

And to make things worse, his dream of starting a publication would have to be done during what was then being called “possibly the worst national economic crisis since the Great Depression.”

“All I had was a name for the magazine,” he said. “I had a vision for the Rio Grande Valley and decided that’s what it should be called. Rio Grande Valley, RGV, my vision, that was it! RGVision.”

Ignoring, or maybe ignorant of, the national chorus of doom-and-gloom economic experts, Gabe was determined to start a publication that would focus on issues important to citizens of the Rio Grande Valley in an effort to help the area grow. 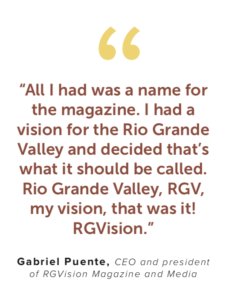 Fortunately, Gabe’s brother, Frank Puente, owned roofing company Puente Roofing in Harlingen that was much in demand after the storm. Calls from potential customers had fallen from a peak of 120 per day immediately after the storm, but there was still enough business for Gabe to help out with.

“I was 28 years old, not heavily in debt, but no more paychecks, so my brother let me stay with him and he floated me for a few months while I tried to get RGVision going,” he recalls.

While the odds were against him, on the positive side, Gabe did have a lot going for him. He’d graduated from UT-San Antonio and interned at Montemayor y Asociados, the second largest Hispanic advertising agency in the nation at the time.

“We worked with Modelo, American Airlines, the Chrysler Group, K-Mart, and others, so I got lots of great experience in advertising and marketing,” he said. “I had developed a huge interest in consumer behavior, the psychology of why consumers make the choices they make.”

At 22 he’d been offered an executive position at a similar company in Atlanta, but decided against it. Instead, he worked at various jobs in San Antonio in retail and nonprofit, followed by a stint in Colorado.

Then came the job offer that would provide the precise, hands-on experience he would need to start RGVision.

“I was approached by a magazine publisher in San Antonio who was looking for an ad salesperson with the experience I had in marketing,” Gabe said.

On this job, he became intrigued by the fascinating start-up stories his customers told him — to the point that his supervisor suggested he should spend more time selling, not listening to rags-to-riches stories.

“But that’s how people do business,” Gabe said. “A customer likes the relationship that develops from swapping stories and they decide to do business with you.

“In fact, it became easier to sell ads in the publication because I felt every customer I talked to had a story to tell.”

Soon Gabe became obsessed with the idea of returning to the Valley to share his talents and experience in a way that would benefit the community.

“It hooked me,” he said. “I couldn’t really think of anything other than starting a magazine in the RGV. So, I gave my two weeks notice and announced I was returning home to start my own thing. My boss, the publisher, was very supportive.”

Gabe’s problem now was where to get the funds for a new magazine, not an inexpensive endeavor.

“I just took another leap of faith,” he said. “Because of the financial crisis, businesses were cutting back on advertising. But I was used to working with people on tight budgets. I drew up a list of Harlingen businesses and started calling on them.”

Then Gabe met with the one businessman who would provide the initial boost in getting RGVision off the ground. 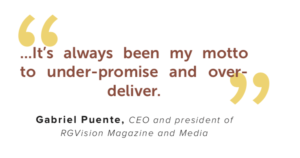 “I came across Mr. Bob Duncan, of First Community Bank in Harlingen. I knew him because I’d played tennis in high school with his daughter, Lucy. But imagine his side of this encounter. He’s a banker, so he knows all about the financial crisis. Then here comes this young kid selling a new magazine.”

“He paid for six months advertising,” Gabe recalls. “He said he trusted me and knew I was good for it. Integrity and business credibility are huge. And it’s always been my motto to under-promise and over-deliver. But now I had a check in hand. Now I knew I had to get this publication going!

“At the time, that’s what people were buying from me: my word,” he continued. “So, September 2008 is when I started selling ads for the publication that would come out January 2009. But as I visited each customer after the first issue came out, they all loved it!”

Gabe said Duncan’s trust in him gave him the momentum to get other advertisers on board who loved the concept of RGVision and the business has continued to grow ever since.

Five years in, with another leap of faith, Gabe began compiling a media team that has now grown to eight full-time experts in various fields, a part-timer and an intern, all in the interest of helping both the staff and their customers grow.

“I had customers who needed help with websites, others who needed help with social media or video,” Gabe said. “We now have those experts who are a part of a team that knows our mission and goals. And our goals are about providing our customers with the services they need to grow, not just selling more and more ads. It was time to invest in the business; I wanted to invest in people.”

Gabe said it’s now not him but the team who is guiding the publication, which frees him up to share his marketing expertise with clients to help them with their marketing agendas, objectives, and goals.

“Ultimately, it will be our customers who advocate for us,” Gabe said. “That’s been my business model and philosophy.” 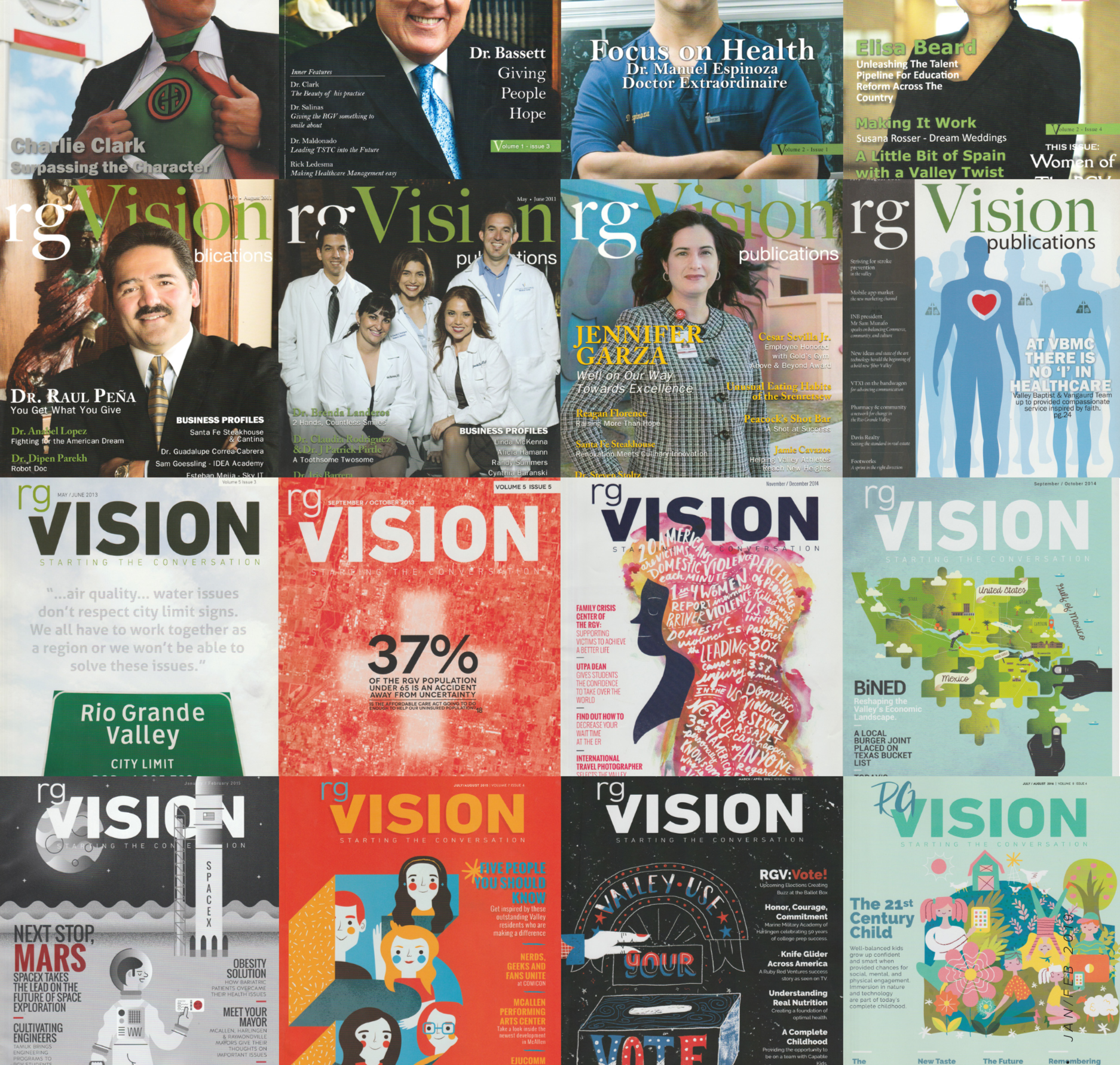 Ten years after that fateful drive through rugged South Texas ranch country, RGVision has been a resounding success, distributed at over 450 locations throughout the Valley as well as to readers online, all of whom are buying into the magazine’s mindset and philosophy of regionalism.

Along the way, major decisions have been made on the magazine’s presentation, including the use of illustrated covers as opposed to other publications that sell front page photos of people for the sake of vanity.

“During my visits to the Valley when I was still living in San Antonio, I knew there was no publication here that promoted the people for their successes and complimented them for their growth,” he said. “RGVision has changed all that.

“If we’re going to compete with Dallas and other large markets, we have to think of ourselves as one region collaborating, not individual areas fighting each other for a piece of the pie,” he said.

In an industry in which local publications seem to rotate in and out of business in rapid succession, Gabe believes RGVision has endured because of an emphasis on ethics and clarity.

“I think we’ve lasted as long as we have because of our integrity, our credibility and the focused efforts of our team. Ultimately, it’s a vision of our goals and objectives that is clearly defined and shared among our team.”

As for the future, Gabe sees RGVision and RGVision Media growing for the benefit of all.

“I just want to continue to develop leaders, and expand into a viable company that has triple the employees we have now so we can offer opportunities and career options to the citizens of the RGV in this particular industry. I want them to be successful, contribute to society, and be proud to call the RGV their home.” 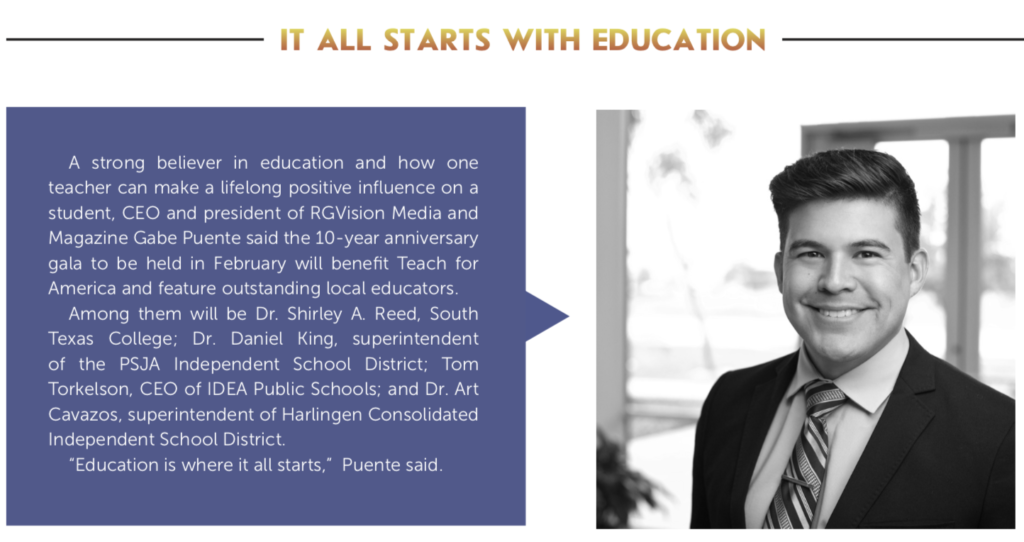