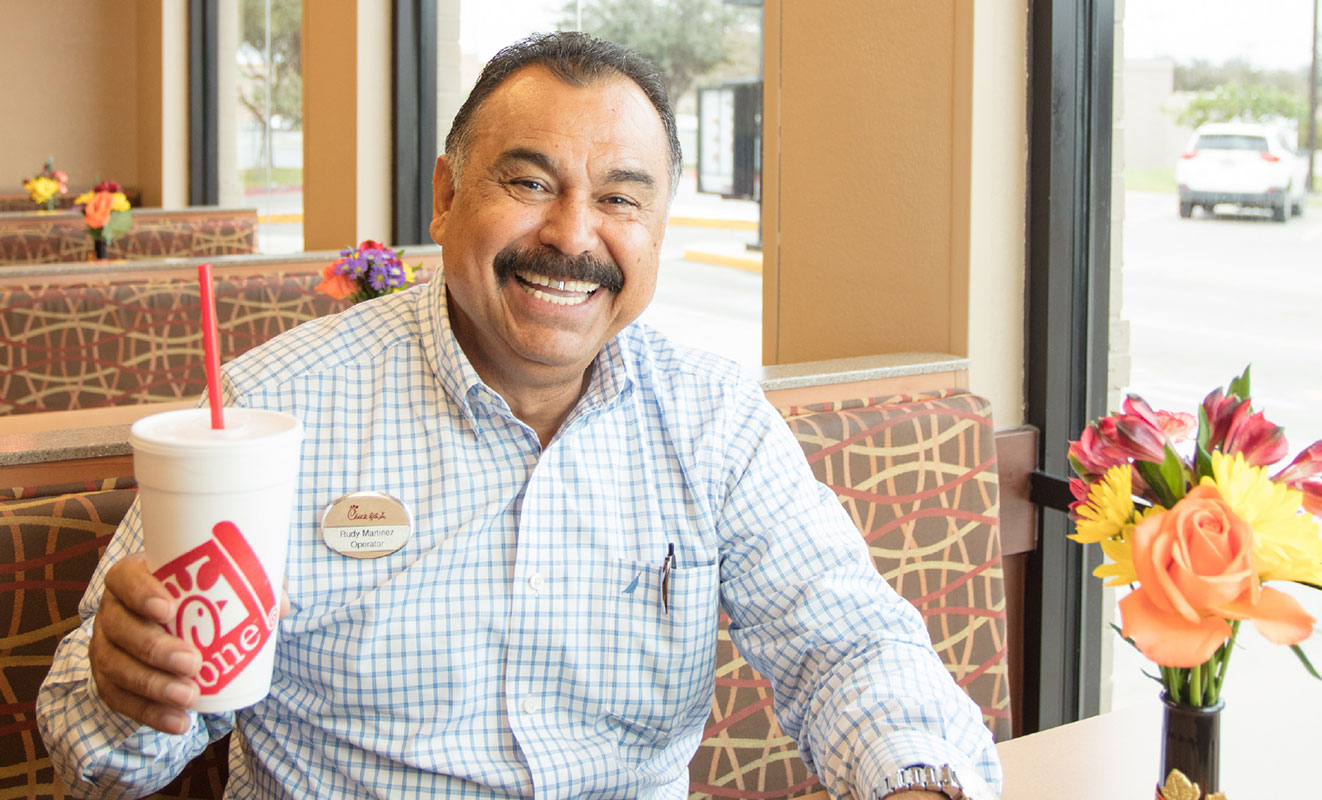 The rags-to-riches story of Chick-fil-A’s Rudy Martinez is worthy of a movie that could have happened, as he said, “only in America.” The plot is that of a destitute Mexican immigrant who works his way to wealth beyond his craziest dreams.

Rudy, the youngest of five, was born in the tiny Mexican border town of Valadeces, across the Rio Grande from Starr County. His father was an American citizen; his mother, a Mexican.

The lack of schools in the area prompted his mother, Esther, now 92, to move the family upriver to Reynosa where her children could get the education they needed.

Rudy excelled in his classes, eventually earning a medical degree in Monterrey to become a family doctor. But by then, the family had moved across the river to the Rio Grande Valley. Rudy followed but wasn’t certified to practice medicine in the U.S. as he had been in Mexico.

“It was 1982,” he said. “I was married, had one daughter, didn’t speak English, and badly needed a job to support my family.”

He began by applying at medical clinics, hoping to work as a nurse. But his lack of English kept him unemployed. He had nowhere to turn until one day he stopped for a free sample of chicken at the Chick-fil-A at La Plaza Mall in McAllen. It was a chance encounter that led to a dream Rudy said he is still living today.

“I asked Mercy Contreras, the young lady handing out the samples, if they were hiring,” Rudy recalls. “She took me back to the owner/operator of the restaurant, a tall Anglo man who hardly spoke Spanish.” 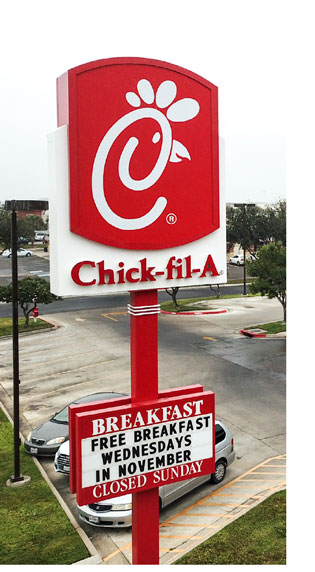 After Mercy translated, Norman Kober mustered what little Spanish he knew, looked Rudy in the eye and asked, “Quieres jale?” Do you want work?

Today he says, “There’s a difference between wanting and needing, and I think my answer impressed him.”

Kober was even more impressed when Rudy said he could start working immediately if Kober handed him a uniform.

A few days later, after an English-speaking cousin helped him fill out the job application, Rudy started working at that Chick-fil-A. At the time of the interview for this story, it was 33 years ago almost to the day.

For almost two years, the once-Mexican doctor breaded and cooked chicken, washed dishes, swept floors, mopped, whatever it took to help run a successful restaurant. Along the way Rudy picked up enough English to start taking orders from customers. He stayed late every day to help file daily reports and eventually earned the job of assistant manager.

Soon, Rudy convinced Chick-fil-A officials to give him a scholarship to study English at the then-Pan American University. He attended classes four days a week then worked evenings and weekends at Chick-fil-A to log in 40 hours.

Kober helped Rudy practice his English by sending him to assist in the startups of new Chick-fil-A restaurants all over the country.

“I lost count after 20 grand openings, but a lot of the kitchen help at these new restaurants were recent immigrants from all over Latin America, so they were glad to train under me in Spanish,” Rudy said.

By the mid-1990s, Rudy had become Kober’s right-hand-man. He was also helping run Kober’s second Chick-fil-A on Jackson Road in Pharr, doing everything but signing supply and payroll checks.

“My dream then was to have my own FSR, free-standing restaurant, as opposed to most Chick-fil-As that are located in malls,” he said.

Rudy’s exhaustive efforts did not go unnoticed by Chick-fil-A officials. In December of that year, Kober told Rudy to prepare for a phone call from the corporate office in Atlanta, Georgia, offering Rudy the position of owner/operator of a Chick-fil-A in San Antonio that was doing poorly.

Soon, Rudy and his wife were flying back in first class from Atlanta, toasting with a Coke that their dream had come true, a restaurant of their own.

But the 12-year old establishment was a disaster. It was dirty, in a poor location in a rundown mall with only three years left on a 15-year lease.  It was Chick-fil-A’s lowest performer in the country.

When Rudy told the six employees there that a lot of hard work was in their future, two quit on the spot.

But Rudy and the four remaining employees got busy. He innovated and went over budget to attract customers. He placed Chick-fil-A placards on boarded up stores at the mall. He convinced large anchor stores to place free Chick-fil-A sandwich cards in their employees’ paycheck envelopes, and he passed out more free cards to businesses along Military Highway. 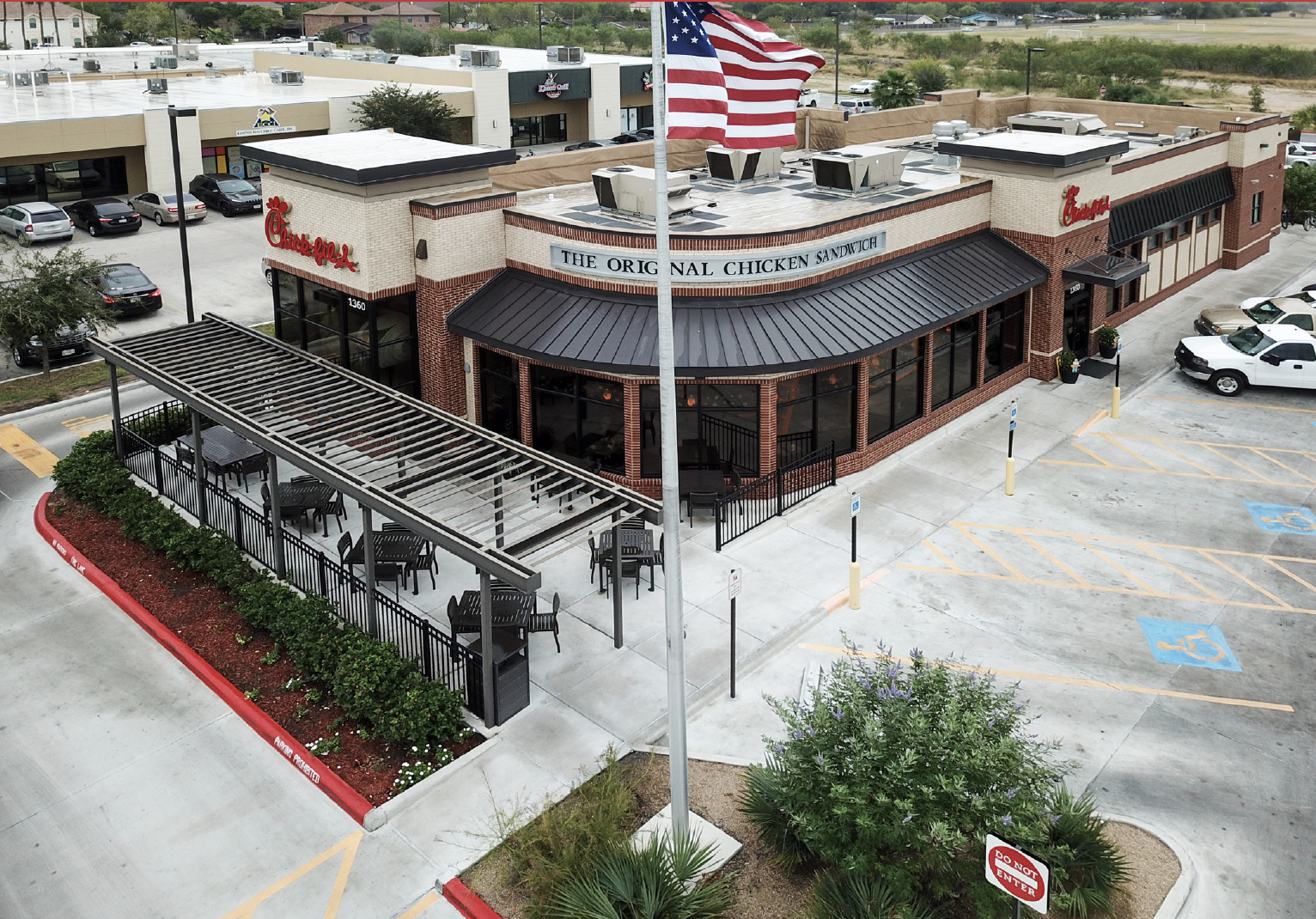 In 1998, sales jumped another 32 percent, earning Rudy back-to-back Symbol of Success awards and a clean title to the leased car.

“That new car was a huge sign of my success,” he said. “Nowhere but in America could that happen. My whole family and in-laws were so impressed. And it hadn’t felt like hard work because I enjoyed it so much. I felt like a professional athlete playing for a living, not working. What more could you ask for?”

The restaurant in San Antonio didn’t close after the lease expired as Chick-fil-A had planned before Rudy took over. He was given a better location at South Park Mall and by 1999, sales there hit $1 million.

In 2000 he was forced to give up the restaurant for a new restaurant at the much more affluent Inghram Mall. In two years, Rudy’s magic drove annual sales up to $1.7 million. He and his growing family were living the good life with a six-figure income and a new house in a San Antonio suburb when opportunity knocked again.

Chick-fil-A was opening a new free-standing restaurant in McAllen. After many anxious weeks, Rudy finally got the news: the restaurant was his if he wanted it.

It opened on December 5, 2002. Located just north of Trenton on North 10th Street in upscale north McAllen, his restaurant was at that time surrounded by farmland. But corporate financial studies predicting an eventual commerce boom in the area were correct.

In 2015 he opened his second Chick-fil-A, a new restaurant in Edinburg, now managed by Rudy’s daughter, Laura.

When asked by corporate officials how Rudy would manage to run two stores, he said, “I don’t run stores. I develop leaders to run them for me.”

In 2016 his finely tuned lucrative stores had combined sales of $11 million, employing 150 people who all learn and practice Chick-fil-A’s Recipe for Service that includes eye contact, smiling, using a friendly tone and staying connected with customers.

“We went from four employees in San Antonio to 150 employees now,” he said. “The good Lord will decide how I proceed, but I’m looking at a possible third restaurant in 2018. There are over 100 owner/operators like me with two stores in the Chick-fil-A chain, but only two that have three stores. I may be the third. We’ll see.”

At 61 and with a hip replacement in his medical history, Rudy’s not sure what lies ahead. But he’s prepared for whatever comes, confident in the success of his rock-solid convictions. These include hard work, smart work, faith, service to others, trust he’s developed with many, giving back to the community and raising a loving family by making time for them.

“When I came to the U.S,” he said, “I found Chick-fil-A. That’s when my dream began. I’m living proof of the American Dream, and I don’t want to stop dreaming.”