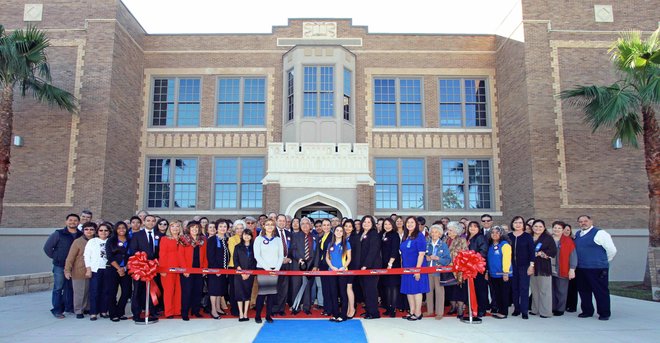 Pharr-San Juan-Alamo ISD welcomed alumni from as early as the 1930s to celebrate the 100th anniversary of its first high school located on Business 83 in Pharr. The school, which was recently renovated to preserve its historic status and is now the home of the district’s first early college campus, PSJA Thomas Jefferson T-STEM Early College High School. Centennial celebrations began with a ribbon cutting ceremony, followed by a once-in-a lifetime evening celebration Dec. 3., 2015

During the centennial festivities, PSJA school district officials, current and former staff members, alumni of all ages and teachers celebrated and reminisced on the past and shared their future goals. In addition, attendees toured the campus and viewed special alumni memorabilia on display.

According Olivia Robie, a 1958 PSJA graduate, she was happy to relive old memories and was glad to see how the district has evolved since she graduated.

“The event was beautiful,” said Robie, who donated personal memorabilia to the school district. “I attended school here and have a lot of memories. I was involved in cheerleading and I was a Bearette. I love what the Superintendent and School Board have done. My children all came to PSJA and are all educated, PSJA has done good by our children. I am a proud alum.”

In addition to donating special memorabilia like their letterman jackets, letters and photos, alumni had the opportunity to share their favorite memories and stories while at Jefferson.

For Mauro A. Trevino, a 1957 PSJA graduate, the centennial celebrations brought back numerous significant memories.

“If I could relive one moment of my time, it would be when I got my diploma,” Trevino recalled. “I was the first one in my family to graduate from high school. My parents were sitting in the stands and it was great for me.”

Since it was built in 1915, the Jefferson Building has served many generations, as the tri-city area’s first high school, a middle school and a ninth grade campus. Due to the significance of the Jefferson Building, PSJA T. Jefferson T-STEM ECHS Principal Virna M. Bazan said she is grateful for the opportunity to continue educating generations of students and representing the innovative school district.

“PSJA Thomas Jefferson T-STEM Early College High School is the lighthouse of PSJA,” proudly said Bazan of her state-of-the-art campus. “This school building has played a key role in educating generation after generation of students from Pharr, San Juan and Alamo. Students here at PSJA Thomas Jefferson are already productive members of society. I want to assure you that our future looks bright thanks to these wonderful students. The 100 years to come are filled with excellence and we will not let you down.”

First built in 1915, the historic building was first known as Pharr-San Juan Public School and was part of Common School District No. 4, with an enrollment of 143 students in first through 11th grade. Over the years, as the school district grew and evolved, the building took on many names which included:

After being vacant for 10 years, the Jefferson building which received a historical marker in 1986, has been the home of PSJA Thomas Jefferson T-STEM Early College High School since 2012. It was the first PSJA ISD early college high school, serving as the role model for the rest of the district. Since its inception, the campus has earned Exemplary Ratings and Distinction Designations from the Texas Education Agency, with many students graduating with the opportunity to earn their high school diploma and an Associate Degree from South Texas College.