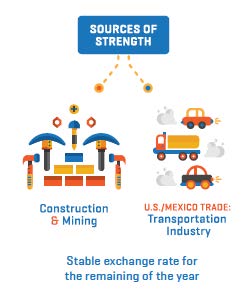 This year will see the border region playing an increasingly significant role in the U.S./Mexico relationship, according to top economists.

“Well, for the border outlook, I think there is good news.  It is growing, strongly I would say around 2 percent, even though the Mexican economy is not doing as well.  The manufacturing sector and the automotive industry is doing just fine, and that’s where we benefit the most, in the automotive,” said Jesus Cañas, a business economist at the Federal Reserve Bank of Dallas.  As a member of the regional group, he analyzes the regional economy.

His research at the Fed also focuses on issues pertaining to the Mexican economy, the U.S.–Mexico border economy, and the maquiladora industry.  Cañas was a keynote speaker at South Texas 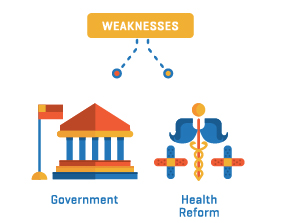 College’s Bi-National Innovation Conference (INNO’) in September, and he offered his forecast for the border economy in 2014.

“The border region is not at the age of the U.S. economy anymore,” he said.  It’s a key player in this U.S./Mexico economic relationship, and even some U.S. companies, particularly automotive companies, are realizing that the border and Mexico as a platform to sell to Asia and South America.  So again, it’s gaining more relevance, and hopefully it will be even better in the future.”

A new superhighway in Mexico makes its debut in 2014

A new superhighway in Mexico will, by far, be the largest catalyst for trade in the coming decade, according to the experts in the produce industry based in the Rio Grande Valley.

In fact, the sheer growth over the next 10 years is unfathomable, according to Bret Erickson, president and CEO of Texas International Produce Association (TIPA), who says he is anticipating one of the largest surges in imported fruits and vegetables ever seen by those in the industry here.

“A sharp increase in Texas imports, combined with record growth in Mexico, and a boom of manufacturing goods coming from Asia is creating a perfect storm, and eventually a ‘tsunami’ of trade that will benefit the region,” Erickson said.  “There is all this stuff happening, and maybe it’s because I’m living in a produce bubble, but I go to all these meetings and I think to myself, ‘I don’t know if anybody yet is starting to realize all the pieces.’  Somebody should start putting these pieces together.”

TIPA has seen a 67 percent increase in produce volume over the last five to six years, along with double digit growth four of the last five years, he said.

Texas has consistently surpassed Arizona in volume three of the last four years, so as a result, Arizona businesses have been setting up shop in Texas, and that trend is increasing, Erickson said.

Why the increase in Texas imports?

A rapidly growing population is increasing demand.  While Mexico has been aggressive in supplying the U.S., decreasing its acres of farmland, as well as making improvements to its Mexican infrastructure, especially the creation of the country’s interoceanic corridor, the Baluarte Bridge and Mazatlan-Durango Highway, it will create significant time and cost savings for delivering product to the Midwest and East Coast markets. 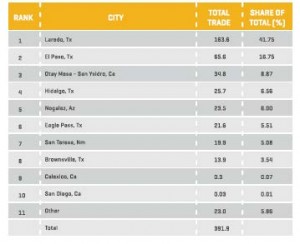 Estimates say shippers can save six to eight hours traveling from Mazatlan to South Texas compared to Arizona.  Cost savings can be as much as $500 to $600 in savings per truck on the Mexican side if originating from Sinaloa, and $2,500 or more per truck depending on their final U.S. destination round trip.

“I had one of our largest importers of citrus saying that once this (highway) is in place, they can probably save up to 25 percent on their shipping costs,” Erickson said. “If they are shipping 3,000 or 4,000 loads a year, times $2,000 a load, and they can save 25 percent every load, that goes straight to their bottom line.  That’s tremendous savings for them.”

So what does the future hold?

Citing figures from the Texas A&M Center for North American Studies, Erickson says the region can expect a 127 percent increase in produce import volume by 2020.

That is the equivalent of 360,000 additional truckloads, with an estimated total value of $7 billion in imported produce coming in less than a decade.  This increase will add to a total state annual economic impact of $651 million, and 6,920 estimated jobs during that time span. 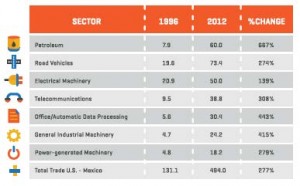 “The new highway in Mexico is by far the largest catalyst that we will see in this industry, (along with) the rising tide of produce that we are seeing coming in the next seven years,” Erickson said.  “It’s great for our region.  It’s very exciting to be a part of it.”

Nearly two-thirds of all fresh fruit and vegetables consumed in or shipped out of Texas are imported.  Nearly 35 percent of all fresh produce in the U.S. is imported, and a vast majority of that is from Mexico.

Between 70 to 80 percent of the vegetables that Mexico produces are grown in Sinaloa.  Produce then gets shipped to the east coast and into Europe via corridors, which traditionally have run through Nogales in Arizona, an 18-hour trip.  The new Coridor will cross seven states in Mexico, starting in Mazatlan, and will cut the time it takes to get to the U.S. from 18 to 10 hours, ending in Matamoros.

The highway took six years to build at a cost of $3 billion dollars (American), and is the largest public works project ever undertaken in the history of the Republic of Mexico, according to Mexican officials.

The engineering marvel will encompass over 60 tunnels and 60 bridges to connect what is considered the breadbasket of Mexico, the Sinaloa-Durango area, to the Rio Grande Valley.  As a result, the highways will become the closest connection ever between the Pacific and the Gulf Coast when it opens later this year.

“My piece of the pie is produce, but sitting in on all these meetings, I’m hearing these other guys and start thinking that we need to talk about this whole big picture,” Erickson said.

One of the most important factors that will impact education this year is the effects of HB 5, which is slated to open new doors of opportunity, according to Region 1 executive director, Cornelio Gonzalez.  Educators and those in business need to be ready to take advantage of the law passed during last year’s legislative session.

HB 5 entails major changes to graduation requirements, and it goes into effect during the 2014-2015 school year.  The 83rd Texas Legislature approved the transition from the three current high school graduation programs to one foundation high school program with “endorsements” to increase flexibility for students. 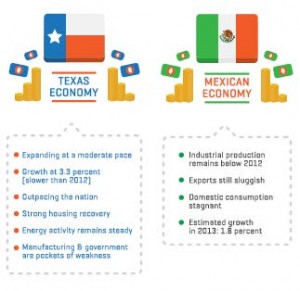 “RGV LEAD and Region 1, businesses and schools, all of us working together, is really what is needed so that we can make the best of the opportunities that are presented to us,” Gonzalez said.  “We really feel the state opened up a door of opportunity for all of us.  If we are wise, and we consider it carefully and get involved in the process, we can come out with the best solution, and the best proposals in order to open more doors for students.”

Those in business say they can’t see where continued impact of merging business and education is headed exactly, but say they know where it is headed if talks don’t continue.

“If you don’t do it, we are certainly going to fail,” said SpawGlass South Texas region president, Rene Capistran.  “I believe that the key to success right now is getting our students engaged.  In business, it’s our responsibility to talk to these students and talk to them about the opportunities there are in business.  These students need to know the importance of soft skills and critical thinking skills, and I believe that if we continue to do this, we can continue to grow.”