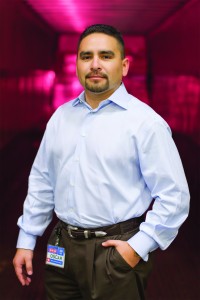 There is a bold message located somewhere in every H-E-B throughout Texas and Mexico. Partners (employees) who have spent any length of time with the company call them ‘pillars’, which support the basic tenets of the company including community outreach, great talent, a strong focus on customers and sales growth.
For Oscar Rodriguez, facility leader at H.E.B.’s huge Support Center located in Weslaco, and the 200-plus staff located there, understanding the community’s needs is paramount. At the forefront of the company’s disaster support efforts in the Rio Grande Valley, Rodriguez oversees tons of product, as much as 600,000 units shipped weekly to communities in need during hurricane season.
It means long hours, with little praise. Rodriguez and co. work quietly but effectively behind the scenes with first responders and emergency management officials, although their link with Valley communities is greater. “What takes top priority for the company is a heart for people, head for business and passion for results,” Rodriguez says, quoting H-E-B’s mission statement. “The point is driven at every single store.”
“Each and every person counts. Whether it’s an employee or someone in the community or a customer, this is what makes HEB and its partners the greatest retailing company out there. We stand together with three important pillars, community, great people and customers.”
As the head of H-E-B’s distribution arm in the Valley, Rodriguez oversees millions of dollars in produce shipped across Texas, about 65 percent of which is solely Valley produce. Logistical and transportation expertise are the key elements that make the location in Weslaco the first choice for state agencies like the Department of Public Safety in times of crisis.
During hurricane season, the busiest time of the year at the support center, Rodriguez can be found managing the various agencies which have set up their command centers at the facility.
The Weslaco support center is the command center for the State of Texas in the region. H-E-B opens up its facilities for the National Guard, which uses the warehouse to store essential items like water, cots, blankets and medical equipment during crises. Accommodating hundreds of National Guardsmen, H-E-B not only provides them with an area to store product, but also houses the troops who remain onsite during a catastrophic event. 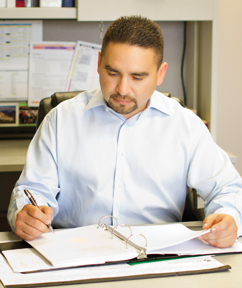 “We don’t really say too much about that because the most important thing is thinking about ‘how we can we get the disaster relief as quickly as possible to our communities and people of the area’,” Rodriguez said. “It’s a great opportunity for the community to know that this particular facility is helping. Folks probably don’t know that. They don’t know that this becomes the main campus for such an event, and that’s any kind of disaster relief. That can include hurricanes or flood threat, whatever the case may be. As a matter of fact, right now we are still storing stuff for the State of Texas, like cots and blankets. We just recently had an inventory of their product.”
San Antonio-based H-E-B has been ranked No. 11 on Forbes’ 2006 list of “America’s Largest Private Companies.” The company was named Retailer of the Year in 2010 by Progressive Grocer, and Supermarket News ranked it No. 13 in the 2008 “Top 75 North American Food Retailers” based on 2010 revenues.
H-E-B is the 25th largest retailer in the United States, and donates 5 percent of pre-tax profits to charity, according to the company website.
“Our employees understand and believe in what we’re doing for the community,” Rodriguez said. “It’s amazing to see how you get so many people in one area and they understand the situation. They understand that we are providing a great service to the community. Whether that’s HEB product, or the National Guard Disaster Relief, or the State of Texas doing something. All of those things coming together…our employees are part of the community. It gives them a sense of pride. There is a lot of emotion involved. I think that’s where the elevated sense of urgency comes in. They understand how important it is.”