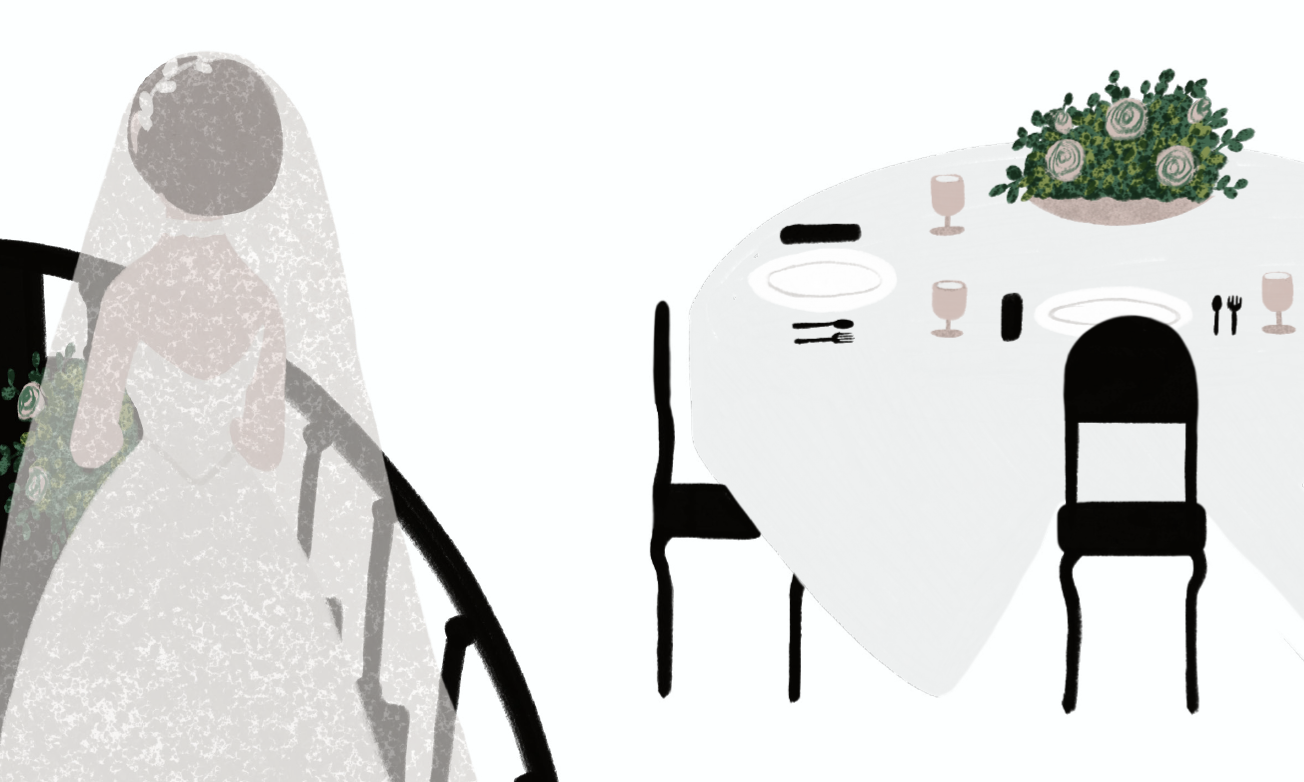 Andre Roman jokingly asked his now-wife, Karen, to marry him over her choice of sweet potato fries for his side item during their first date in 2015. In just a few years, though, they made the engagement official — and scheduled their wedding for June 20, 2020.

They had no way of knowing that they’d set the date for the middle of a pandemic.

“We were already so deep into the wedding planning and paying off our vendors there was no way we could get our money back or change to a smaller venue,” Karen recalled. Andre was living and working in London at the time. “Him being in Europe, he saw the surging cases before we did. We knew it wasn’t going to disappear by the fall. Our vendors were giving us the option to postpone to October, November, and we just knew it wasn’t going to be any different.”

They reduced their guest list, made peace with fewer people in a large venue, and dealt with tightened restrictions ahead of their special day.

“We knew we were going to have people missing, but in the end, it wasn’t about the big party,” Karen said. “It was about him and I getting married, exchanging vows, and having our marriage blessed.”

COVID-19 wove itself into the story of their wedding — right down to Karen standing in a long line trying to buy hand sanitizer as wedding favors at a time when it was impossible to find personal protective equipment on shelves. 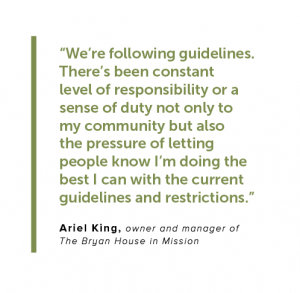 “Looking back, in spite of everything, it was perfect in its own way,” she said. “I don’t regret the decisions that were made. It’s looking brighter for future brides and I’m sure if we had waited, we would’ve had a more normal wedding. We’re embracing it and, in the end, it worked out and we’re happily married.”

The pandemic had a ripple effect on couples trying to get married and the venues and vendors that help make that possible throughout 2020. State and county rules limited the number of people who could gather, and safety protocols dictated the need for social distancing and mask wearing.

The wedding industry took a hit.

“It did hurt us,” said Ariel King, owner and manager of The Bryan House in Mission. This historic venue hosts a variety of events — weddings chief among them. “Even though it was hard for me, it was harder for others.”

New regulations forced many traditional event venues to shutter. King did her best to offer couples a safer — if smaller — option to tie the knot.

“We’re following guidelines. There’s been a constant level of responsibility or a sense of duty not only to my community but also the pressure of letting people know I’m doing the best I can with the current guidelines and restrictions,” King said. “People are still going to get married. Life has to go on.”

To adapt, she started offering customizable all-inclusive packages that utilized local businesses like catering services and musicians. King also revised every detail to ensure maximum safety during each event, including capping the number of people seated at a table, nixing servers carrying around trays of traditional hors d’oeuvres during cocktail hour, and encouraging couples to hire someone solely in charge of sanitizing surfaces throughout the gathering.

But smaller weddings mean less profit for King and The Bryan House — and working even harder to make that income. It’s one of many difficulties that persist through 2021.

Kairos Coffee Catering, founded by Gabriel Sanchez and his wife in 2017, also suffered during the pandemic. In March 2020, Sanchez started receiving calls that, one by one, all of the weddings his business had booked needed to be postponed because of the pandemic.

“We’re still waiting on some,” he said.

Prior to that, Sanchez estimated that Kairos had served up lattes, mochas, cappuccinos, americanos, and hot chocolate to more than 100 weddings.

Sanchez pivoted in response to COVID-19, delivering coffee and doing drive-by events rather than waiting on the postponed events that his businesses depended on to survive.

“Our business has grown — it’s really flourished even in the middle of the pandemic,” he said.

In spite of the current challenges, Sanchez anticipates a bright future particularly as restrictions ease and vaccines begin. In fact, his business is all about the perfect timing.

“We’re a Christian business — ‘kairos’ is a Greek word and it means the appointed time of God,” he said. “We just believe that ultimately it was God who appointed us to this business — to be a part of people’s lives and to be a hope and blessing.”