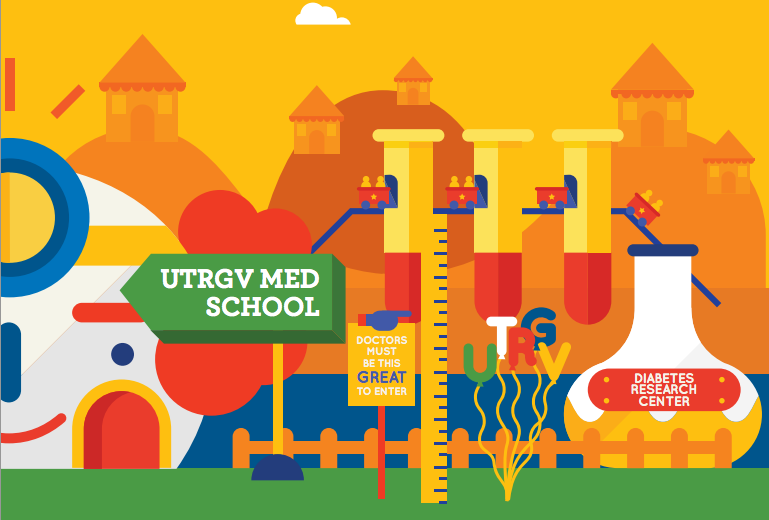 New medical schools are rare in this state. The last Texas med school, Texas Tech’s Health Sciences Center School of Medicine, was founded over seven years ago in 2008. Before that, Texas hadn’t seen a new medical school since 1977.

Clearly, our state likes to stick with the medical school status quo. That’s why it’s surprising that not one but two Texas medical schools are opening their doors next year: Dell Medical School at the University of Texas at Austin and the University of Texas Rio Grande Valley Medical School. Both were founded in 2013, and both plan to admit their first class of students in the fall of next year.

UTRGV and Dell are essentially medical school twins. Like any twin will tell you, sharing a birthday with someone just like you inevitably invites comparison. UTRGV and Dell do have many similarities, but they’re also very different. These differences have major implications the establishment and growth of both schools.

As far as regions in Texas go, Austin and the Valley are about as different as it gets. Lifestyle, population, size, and environment – all drastically dissimilar. The medical landscapes are different, too, with each region offering a unique health experience. All these factors will influence recruitment of students and professors.

The lifestyle differences between Austin and the Valley are sure to influence potential students and professors. In Austin, meeting an actual local is like spotting a unicorn. The city is a magnet for transplants looking for an buzzworthy city that isn’t New York or San Francisco. In the Valley, “local” is a way of life. Nearly everyone down here is from here, resulting in a tight-knit, familial community. There are other differences as well: Where Austin is urban and crowded, the Valley is rural and spacious; where Austin is commercially saturated, the Valley is still developing. And – importantly – where Austin is expensive, the Valley is affordable.

The two regions also differ on what they mean for the medical community. In the Valley, diabetes and obesity are a major public health issue. If there’s any silver lining to this health crisis, it’s that it makes the RGV an excellent research environment. Francisco Fernandez, the new dean of UTRGV Medical School, says he’s already fielded calls from researchers all over the world interested in conducting diabetes research.

Dell Medical School doesn’t offer a focus on any particular disease or disorder. Both schools will offer a top-notch general medical education, but students and professors interested in specific research topics may be more drawn to UTRGV.

Another major difference between Austin and the Rio Grande Valley is their respective medical communities. Austin has what’s called a “hospital district” – a web of medical centers – that includes the Seton and Dell hospital systems. Hospital districts are a great resource, hosting medical school residents and encouraging collaboration among health professionals, among other things. There’s no such district in the Valley. Some local politicians, such as State Senator Chuy Hinojosa and Hidalgo County Judge Ramon Garcia, are pushing for one. Other local leaders are against it, such as Mission’s Mayor Beto Salinas.

What does this mean for medical schools? It means that Dell Medical School students will have access to an established hospital district, while UTRGV students will not. However, if the Valley hospital district takes off, UTRGV students, professors, and staff will have the opportunity to pioneer it. There are pros and cons to both scenarios, which anyone looking to get involved in either school will certainly take into account.

Dell Medical and UTRGV have the same ultimate goal – to train capable and compassionate physicians. UTRGV, however, appears slightly more research-oriented (although Dell has research branches as well). From its South Texas Diabetes and Obesity Institute to its $30 million dollar research budget, UTRGV may become one of the state’s premier research institutions. This is purposeful. According to Dean Fernandez, a research focus will narrow the STEM education gap that Valley students have faced in the past.

Most of UTRGV’s stated goals have that community-oriented vibe. UTRGV is all about the Valley. Dell Medical, on the other hand, paints broader strokes in its mission statement. It aims to graduate doctors who are committed to creating a “vital, inclusive health ecosystem” – but it doesn’t specify where. Students who want to feel part of a community may be more drawn to UT RGV; students who aren’t sure where they want to make their home yet may prefer Dell.

Curricula is another big difference between these schools. Dell’s curriculum is decidedly modern. It was created in-house, and integrates a focus on clinical skills and professional ethics throughout all four years. UTRGV has adopted the CIRCLE curriculum that UTSA’s medical school uses. CIRCLE stands for “curriculum. integration, researchers, clinicians, leaders, and educators” – it’s a quicker way to say that you’re getting a well-rounded medical education. The UTRGV curriculum is more traditional.

Take quick visit to each school’s website, and you’ll get a good sense of the two schools’ marketing approaches. Dell Medical’s website is flashy and sleek – a reflection of its deep pockets and a nod to Austin’s status as the tech capital of Texas. UTRGV’s site, on the other hand, is sparse. It gets the relevant information across, but that’s about it. Perhaps they’re just allocating their resources differently, but as a recruitment tool, it falls short.

As fall 2016 grows nearer, both schools can be seen gearing up to start off their inaugural year on the right foot. One major milestone will be finalizing their facilities – both schools are building state-of-the-art medical education buildings. UTRGV’s is slated to be in Edinburg, and Dell’s Medical School is close by UT Austin’s campus in the heart of downtown Austin.

The biggest finish line to cross will be filling those facilities with students, professors, and staff. Both schools want the best and the brightest to help them reach their goals. Recruitment is already underway, and will likely become more intense as the year goes on.

From community to curriculum, research to recruitment, it’s clear that Texas’s two medical school will are unique places to be. We can expect both to prepare excellent doctors, but to go about it in very distinct ways. However, as different as the UTRGV Medical School and Dell Medical School will be, one similarity is certain: they’re going to be good for Texas.