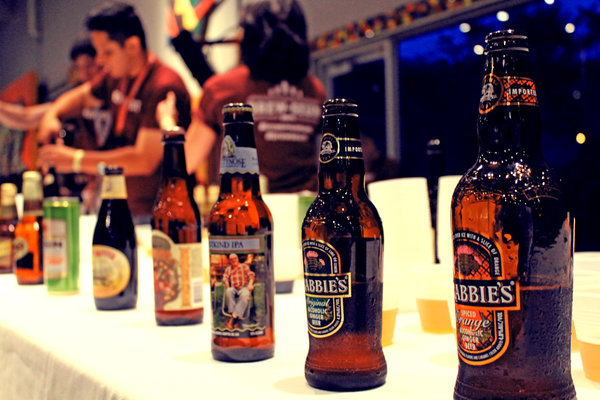 If preserving the nearly-destroyed works of Aristotle in the Baghdad museum is not enough to keep a special place in your heart for the culture of modern day Iraq, you may be interested to know that the life-source enjoyed by philosophers like Alexander the Great’s teacher today flows on tap, a semblance of the ever-flowing Tigris. The oldest recipe and poem about beer comes to us by an unknown Samarian in the form of a hymn dedicated to Ninkasi, goddess of brewing and beer. In a stylish atmosphere of fashion and art, The International Museum of Art and Science (IMAS) has been cultivating our region’s appreciation for this ancient beverage for the last seven years with their eagerly-anticipated annual event, A Night at The Brew-seum (ANTB).

The idea for what was once a one-day event began as a collaboration headed by KRGV’s meteorologist, Tim Smith, and other members of the IMAS’ board. Nicole Marshall is serving this year for the first time as Co-Chair of the committee heading ANTB. “When we first started it was just Saturday night at the Museum,” said Marshall, who is also Co-Owner of Madworks Ad Agency. “The last several years it’s been a week of festivities – Brew-seum Craft Beer Week.” Brew-seum week will begin on Tuesday, April 5th from 6-8 pm at Grain to Glass in McAllen, where a Battle of the Brew Tap Takeover will challenge local brewers to make the judges say, “I’d tap that.” The competition will be followed by the Brew-seum Bash at the Flying Walrus in downtown McAllen, Wednesday, April 6th from 9 pm – 12 am. Anyone who enjoys pairing dancing with that Mesopotamian gift from Ninkasi is encouraged to “drop it like it’s hoppy.” These activities are sponsored by L&F distributors.

Up next on the Brew-seum Craft Beer Week agenda is a beer dinner sponsored by Glazer’s & Leinenkugel to be held at the IMAS on Thursday, April 7th.  100 lucky guests will enjoy a succulent feast, specially-made by House Wine & Bistro and Salt’s Chef/Owner, Larry Delgado. Prices for this event are $125/person at a table of eight.

The grand finale, sponsored by Clark Chevrolet and Clark Knapp Honda, A Night at The Brew-seum will be back for its eighth year on Saturday, April 9th. Paired with delicious entrées, guests will be able to sample over 100 craft beers. Perhaps a tribute to the Hellenistic-type culture of which this celebrated drink is associated, proceeds will go (as is well put by the organizers of this event) towards fulfilling its mission to “promote a deeper appreciation for the arts and sciences through its exhibitions, cultural events and educational programs; and to preserve, expand and display its permanent art and science.”

Leftover beer will be sold at a discounted price the next day from 12 to 4 pm at IMAS, which will be open to the whole family, and will include activities for the kids and your favorite local food trucks.

Tickets for A Night at The Brew-seum can be purchased at the IMAS. Prices vary from $40 for a designated driver (because though this will be a fun event, it should be enjoyed responsibly); IMAS members get a discounted price of $55; $70 for general admission; and $100 for the VIP section where, according to Marshall, you will get to sample premium beers and wines exclusive to VIP guests and stay an hour after the event is scheduled to cap-off. If you hurry onto the website above, you might still get one before the 200 VIP passes are sold out.

The sound of a tap pouring onto a glass is a familiar one to most of us, as it was to that anonymous ancient Samarian poet who wrote, “The filtering vat, which makes a pleasant sound; You place appropriately on a large collector vat.” Plentiful shall filtering and collector vats be, entwined with a noble cause, solidified with a unified goal, and “filtered” through a stream of joy, comparable to “the onrush of Tigris and Euphrates.” Not thinking about attending is unthinkable.