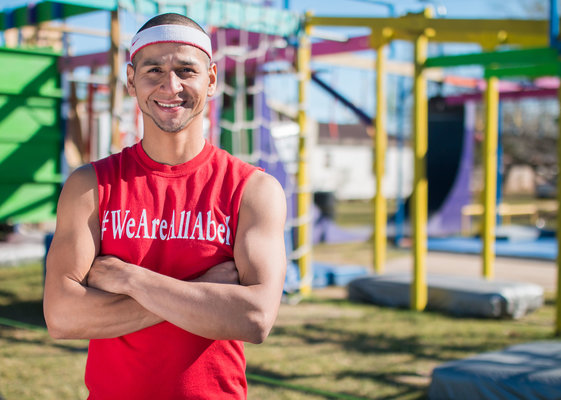 What drives a Ninja Warrior? Parkour enthusiasts may find South Texas lacking in obstacle courses fit for their training needs – but that didn’t stop Abel Gonzalez, two time participant on the popular show “American Ninja Warrior.”  Gonzalez is no stranger to adversity and had other obstacles to overcome; building his own workout facility to train for the televised challenge was one he took on headfirst. From that backyard venture to a full-blown gym focused on promoting a healthy lifestyle, Gonzalez has big plans to put his training to good use.

“I want to chase my dream and be successful,” says Gonzalez, who used to work at the oil refineries doing dangerous but reliable labor. However, his ultimate dream was to try out for the TV show American Ninja Warrior. When he broke his finger, he decided that he would quit his job and pursue his true passion. “I don’t want to be negative or be a victim of my circumstances,” he says, explaining some of the personal history that drives him. He was only twenty years old when he was granted custody of his younger brothers, and he’s been fighting a chronic autoimmune disease that causes the body to attack its own tissues and joints. “It’s a constant reminder that I have to eat healthy,” he says. “I also have to have a healthy mindset and tell myself that I’m not sick.” Gonzalez is a very strong believer in spirituality and connecting with the earth. He reads a lot about fitness and personal development is very important to him. “I’ve been through so many things that could’ve kept me down and made me negative -and they almost did- but I overcame that,” he says.  “If I keep thinking, ‘Man, I have Rheumatoid Arthritis; I’m sick forever,’ then it will constantly be in my head,” Gonzalez explains. “My performance will decline because the mind works together with the body. They’re so integrated that they really aren’t separate.”

This is the mindset that made him a ninja warrior. Gonzalez remembers the process:  The first step is the application video, which Gonzalez says is about who you are as a person, your personality, and your athletic skills.   This was when Gonzalez and his friends got the idea to create their own place to train. “Before we made this gym, Nate and I would have to travel to Houston to train,” he explained.  “We were moving our equipment back and forth a lot.“ They wanted a more stable workout environment, and decided to build a DIY training course with friends to facilitate their training.  “I saw the slab of cement in my friend’s backyard and I said, ‘Nate, if we had this foundation at my house, it would be a full blown gym.’ At first, his backyard looked like a junkyard but he started cleaning it up.” Gonzalez explained that he worked on the project with Nate for a month and then trained for another month before the March qualifier. Says Gonzalez, “We started with building an obstacle or two and then it just kept on going.” Most of the obstacles they have created in the gym are based off of the show’s course, but Gonzalez says that some of them are of his own design. “We try to use whatever we can, and make whatever we can out of what we have,” he says. “That gives us a lot of opportunity for creativity.” The obstacles they built to train with takes them through a circuit including a rock wall, peg board, salmon ladder, warp wall, monkey-bar-type rings, a cage, rope climb, and a lot of padding.

Their at-home training course served them well; Gonzalez made history both times he participated on American Ninja Warrior, though getting there was an obstacle course in itself. The first application video Gonzalez made was not accepted by NBC, but he didn’t let that stop him from trying. “I tried out as a rookie walk-on by driving to Dallas and waiting in line for five days to get a chance to compete,” he explains.

He was one of only three rookie walk-ons in seven years who made it past the two qualifying rounds on their first try. The two rounds in Dallas are prerequisite for the next four rounds in Vegas, where the million-dollar prize is up for grabs.  The first year, Gonzalez fell on Stage Two of the Vegas rounds, leaving him ranked 18th nationally. When he returned the next year, Gonzalez did even better, breaking his own records by making it to the third stage and obtaining rank 8th. Although this was the year two other competitors completed the course for the first and second time ever within minutes of each other, Gonzalez is rightfully proud of himself for his achievements. “I’m very proud of myself because I’m able to compete with some of the best athletes in the country,” says Gonzalez, “even though I’m not a professional athlete in any way.”

Gonzalez, who also recently participated on Team Ninja Warrior on Esquire Network, says competing on the shows are time-consuming, but he’s applying to compete as a Ninja Warrior again this season. When he’s not training his own body, Gonzalez is educating others in the use of theirs; he has a calisthenics certificate and will be getting a parkour and personal training certificate soon. He uses Yoga to help identify issues his trainees may be having: tight hamstrings, tight quads, tight shoulders, and a tight chest are common problems. Gonzalez says imbalances can cause injury so it’s important to show people how to fix these imbalances before safety becomes an issue. He plans to open an indoor parkour gym in the future, and is enjoying the local celebrity status that comes with his previous appearances on Ninja Warrior, as it allows him to get involved with the community. Gonzalez was recently proud to guest host and participate in an event called Over the Edge. Gonzalez was the first celebrity host to repel off the Chase Tower in downtown McAllen to raise funds for the Boys and Girls Club of Edinburg, McAllen, and Pharr. “It’s a great, once in a lifetime opportunity to give back,” he says.