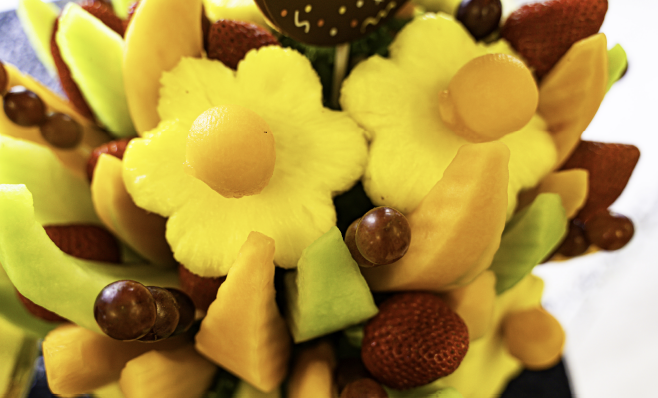 Maurice Welton has been running the RGV’s Edible Arrangements for 14 years now, but the feeling of excitement he receives when delivering an arrangement hasn’t left him. The job has allowed him to meet all kinds of people.

“I do my best to be from place to place so I know what a customer is getting,” he said. “I take great pleasure and pride delivering to children. The little children missing a tooth get a big old smile. They’re happier to see the balloon than they are the arrangement.”

Another delivery that stood out to him was to a woman turning 101 years old. 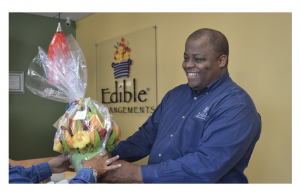 Welton brought the first Edible Arrangements shop to McAllen in 2007 and has since expanded it to four locations across the RGV. Though not a Valley native, his service in the U.S. Army led him to McAllen as a food inspector overseeing MREs (Meals Ready to Eat).

Food service has always been a passion for him.

“We all start at the leg of our mom asking to help with the cake batter,” he said. “I was just fascinated. Some people say this industry calls you — you don’t call it.”

Following his Army service in McAllen, he went to New Orleans for work only to return after being displaced by Hurricane Katrina.

“At that point I lost a lot of stuff and pretty much came back in scraps,” he said. “Then the opportunity just came about. I took a leap of faith and became an entrepreneur.”

On top of overseeing the operations, Welton is involved in every other aspect.

“Cutting fruit, tasting fruit, dipping fruit, delivering fruit — it gives me a direct contact with my customers and employees to know we’re serving a good product from the ground up,” he said. “I’m very active with local vendors trying to provide the best products. I’m very hands-on with my guys to make sure they’re meeting the standards and raising the bar.”

He believes in being a servant leader and operates on the principle of three Rs: recruit, retain, and recycle.

“What that represents is you go out and do your marketing; do your best to show whenever a customer needs you, they can count on you,” Welton said. “You recycle the customer — ‘Hey, you know what? Today I might not want fruit. Do you know where I can get some good flowers?’ ‘Sure, I got a friend down the street.’

“There are enough people for everyone to survive. You have to be a giver. Those who give will receive.”

Though part of a franchise, the shops are run like a neighborhood business, looking out for the community. During February’s ice storm, he said the surrounding businesses helped one another out with what they had.

“That’s how we like to work things out,” he said. “When we first opened up this area right here [in Weslaco], we gave arrangements to all these businesses in a 5-mile radius as a ‘Hi, how are you doing? We’re here.’”

Similarly, the employees across the stores are viewed as family — some of them fellow veterans.

“A couple of people have been here for over 10 years,” Welton said. “People love what we do, love to work where we’re at. We’re all as one.”

They’re always hiring and he said it’s also a great place for a young person interested in the food industry to get their start, just as he did. Welton got his first job after school, which he said helped prepare him for his career ahead in food prep and running a business.

According to Welton, Edible Arrangements experienced the most rapid growth in the years right after first opening in 2007. With every additional store, the franchise application had to start from scratch.

“Any great business has to start in white space, meaning no one is there but you,” he said. “It gives better opportunities because there’s no competition. As you progress, you have to look at the numbers. Can a community sustain it? I felt it could. People love what we do.”

In addition to maintaining a relationship with his neighbors and customers, he’s part of the larger Edible Arrangements community, staying in touch with hundreds of other stores.

“I want to keep my finger on the pulse of what’s happening and changing across the country so I can be first in line at corporate to bring it to the Valley,” Welton said.

The current locations are in Brownsville, Weslaco, McAllen, and Mission — a span that allows them to reach anywhere from Rio Grande City to South Padre Island. For now, he doesn’t have plans for opening additional stores, instead focusing on continuing to provide consistent, quality products where they’re established.

Wherever there are two or more people in one place, he believes Edible Arrangements has the right product for them — from dipped fruit bouquets to chocolate-covered strawberries, cookies, brownies, and cupcakes.

Apart from the usual birthdays and anniversaries, Welton has seen people order products for other unique events.

“People are happier getting divorced than getting married,” he said. “A woman came to one of our stores one day asking, ‘do you have anything for divorce parties? My girlfriend has been divorced for over a year so me and my coworkers are going to take her out to celebrate the first anniversary of her divorce.’”

With Mother’s Day coming up, Welton encourages anyone who hasn’t yet given them a try to do so. The holiday specials start at $29.99 and in certain locations, you can buy your floral arrangement along with the edible fruit basket.

“Moms, suegras, even grandmas who are like moms or aunties that are like moms — any woman that is a mother deserves an arrangement,” he said. “It’s a very universal gift. Who doesn’t like fruit? It’s good for the body. Add a little chocolate and you feel even better.”