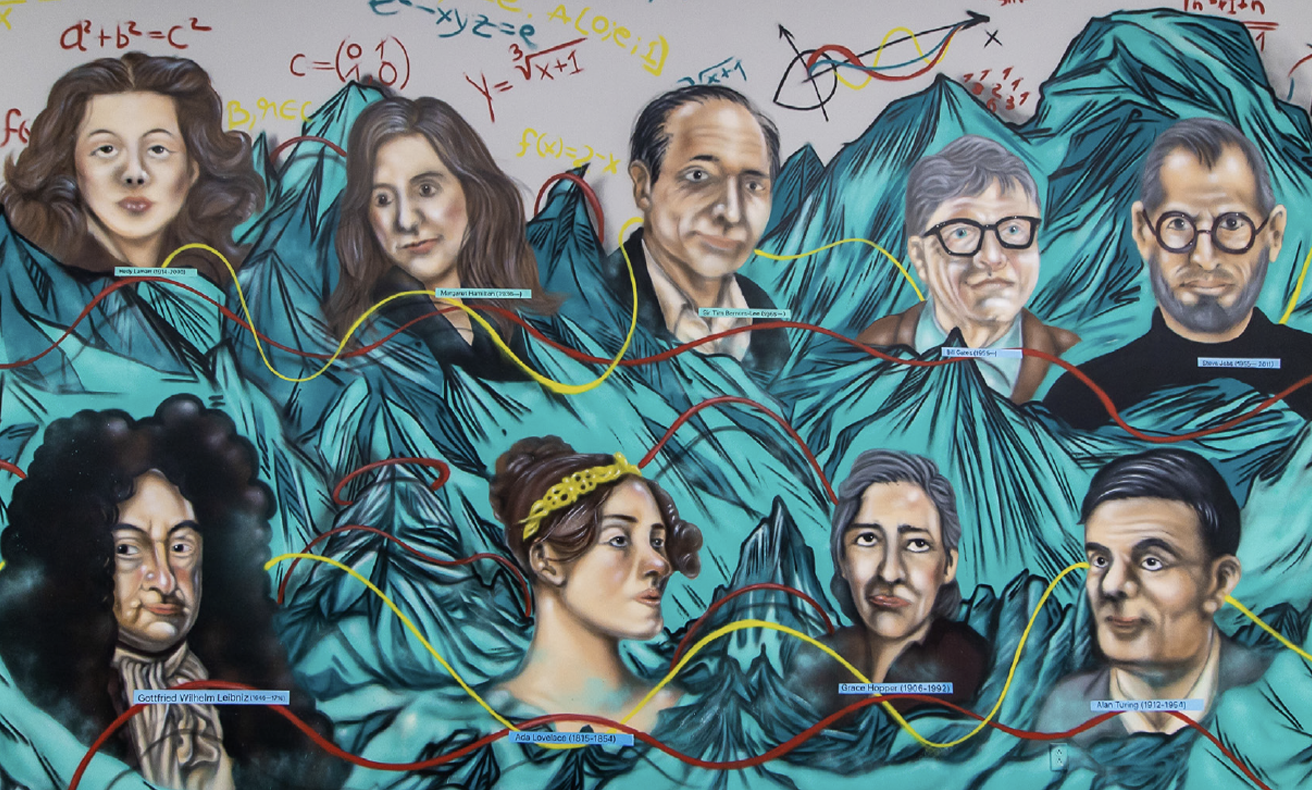 Invention isn’t always a direct path, and innovation often originates from multiple peaks — a mountain range rather than a single summit.

Such is the case of computer science — and the Center for Education and Economic Development’s latest mural dedicated to the founders of technology that shapes and reshapes our lives.

For Cristina Garza, director of social impact for the Mission Economic Development Corporation — Mission EDC manages the CEED building — and artist Manuel Zamudio, the planning and execution of the mural was an opportunity to learn about the often-surprising founders of and contributors to computer science.

“Seeing all these characters throughout history, just learning about that, was pretty cool and kind of mind blowing,” Zamudio said. “And then just leading that to the current leaders like (Microsoft’s Bill) Gates and everyone else, it’s very interesting following that road and knowing that the people that are at the head of it now really didn’t do it alone — it’s a lineage of people.”

That lineage included surprises like Hollywood actress Hedy Lamarr, who was an inventor in her spare time offscreen. Her contributions helped pave the way for wireless communications.

“There were some key players that I definitely wanted and the rest we had to just be very decisive as to having a chronology that made sense starting from the beginning,” said Garza, who curated the mural. “When people think of computer science, they only think of the last 20 or 30 years, but the reality is that a lot of the theory and thinking and logic behind computer science started centuries ago. Binary code is not something new.”

In fact, Leibniz perfected binary code in 1679. The German philosopher and mathematician represents the oldest point of history in the mural.

“When thinking of a timeline, this is incredibly original,” Garza said. “We looked at a lot of examples of timelines and this is the only one that I have seen so far that is not linear. It’s a little bit more vertical in terms of its depth and that allowed us to really emphasize the size of this building, as well. We really took advantage of just how tall the walls are here.”

“Usually, timeline work can be very boring, so we tried to make it something completely original and completely different,” he said. “Visually, the mural is very different than anything I’ve done.”

This isn’t Zamudio’s first mural in the CEED building. Another depicts the history of Mission and the facility, in particular. Before the 55,000-square-foot space hosted small businesses and freelancers in a collaborative coworking atmosphere, it had been a K-Mart and Converse shoe factory, among other uses — which are reflected in Zamudio’s mural alongside La Lomita Chapel and legendary Cowboys coach and Mission native Tom Landry.

A computer science-themed mural at the CEED is a natural addition to the art in the building, she added. “It should be average for a child to see a mural like this.”

“I think for the mural specifically what I really wanted to say or help is all the young kids that want to follow in these people’s footsteps,” he said. “They can see them in different places and learn their story and their unique story can help them move forward.”

From start to finish, the mural took about six months to complete. And this won’t be the last mural at the CEED, Garza said.

“We’re excited to continue to be playful with this building,” she said. “This is a place of exploration and a place of possibilities and so I’m sure there will be more art coming your way. We want people to walk into this building and know that anything is possible.”