“I want to thank everybody in the Valley who put their trust and confidence in the Peña Eye Institute to help them see better,” Peña said.

Born in McAllen, Peña grew up in Reynosa. However, anything the family needed to do — shopping trips, going to the doctor — they did north of the Rio Grande. It was during one of those trips to the doctor’s office to address a childhood cold when Peña found himself inspired. His physician dazzled a young Peña by correctly naming his symptoms and identifying what was causing them. 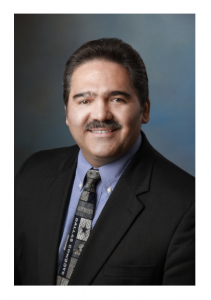 During medical school, Peña did a rotation in ophthalmology. The patient his professor and fellow classmates examined had a hypermature cataract. The man relied heavily on his daughter to lead him to and from the appointment — grasping along the wall with his other hand to ensure he didn’t trip and fall. After a successful surgery to correct the issue, the man came back to have the patch protecting his eye removed.

“His eyes lit up and then you couldn’t keep up with him,” Peña said. “The quality of life that you have with your sight versus not having it is incredible. That’s what made me want to be an ophthalmologist.”

Peña’s education took him across North America. He received his medical degree from the Tecnologico de Monterrey Escuela de Medicina, completed a residency in internal medicine at the then-Texas A&M Scott and White Memorial Hospital, and did another residency in ophthalmology at University Hospital through the University of Cincinnati College of Medicine.

It was in Monterrey, however, where Peña experienced something that would reshape his entire life. In December 1980, when he was 19 years old — and after a biochemistry final — Peña’s truck plummeted two or three stories from the roadway to the dry bed of the Santa Catarina river below. The accident totaled his vehicle, but Peña emerged unscathed.

“I was there just by the grace of God,” he said. “Ever since then, I’ve been trying to find out why God left me here on this earth and trying to help as many people as we can along the way. That’s why it’s important to give back: to help the patients who really need to be able to see and go on with their lives.”

Returning to the Valley after his studies was always the plan — even when a number of offers came in to try to keep Peña in the Cincinnati area following his ophthalmology residency.

“The Valley’s always been my home,” he said.

And there are plenty of people to help here when it comes to his practice. With the high prevalence of diabetes in the region comes conditions like diabetic retinopathy, which speeds up eyesight-robbing cataract formation. Coupled with residents’ widespread tendency to delay medical treatment and appointments, Peña and his team find they must address much more serious issues. 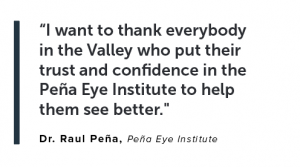 “Unfortunately, we see pathology once it’s already quite advanced,” he said. “Sometimes that’s a sad story because with ophthalmology, it’s better to prevent than to cure something that already happened.”

In addition to the IntraLASIK treatment the Peña Eye Institute is so well known for, Peña performs many other procedures, including cataract and glaucoma surgeries, ocular allergy testing, and much more. He added that he takes the time to completely explain each patient’s options with them before selecting the best way forward for that person.

That includes staying up to date with advancements in ophthalmology and upgrading equipment and treatments, as necessary. It also means that Peña and his team are always looking for ways to give back — whether it’s donating to local nonprofit organizations or traveling to different countries to provide life-changing surgeries through Heal International Medical Missions.

“Here in the Valley we don’t have to go across the world to help — we have those patients,” Peña said.

He often works with his team to identify deserving candidates for free treatment to restore their eyesight.

“We treat everyone with how we want to be treated,” Peña said. “I love what I do and I try to show that to the patients.”