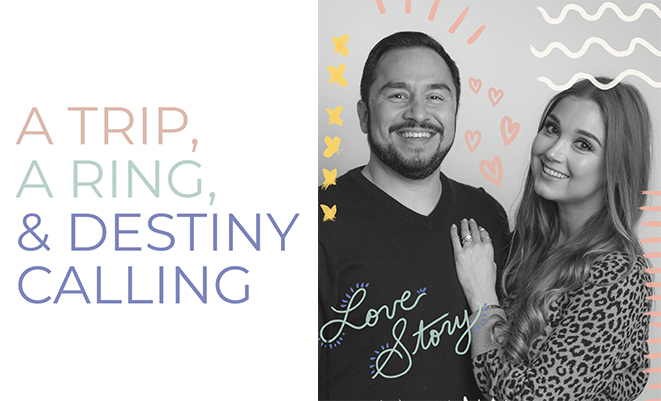 The plan for the man who lives with no plan was set. Rick Portillo and the love of his life, Denise Gunnoe, were traveling with her parents, John and Petra, to Cochem, Germany, to visit Petra’s ailing mother and sightsee. Rick’s plan? Sometime during the trip, when Denise wasn’t expecting it, he would find a romantic spot with stunning scenery, an easily recognizable area so as to be able to return with children and grandchildren, gently kneel before her, take her hand and pop the big question.

Having convinced Denise, his girlfriend of almost two years, that a proposal would definitely not be happening during this trip, he had spent over a month designing and making ready the ring he would give to his princess. Now, the ring tucked snugly and safely behind his wallet in a tiny plastic bag, he began the journey.

Not what would be called a good traveler, tending toward motion sickness, Rick found himself in the backseat of the rental car winding through the majestic German mountains clinging desperately to the contents of his stomach, his face a mask of death. 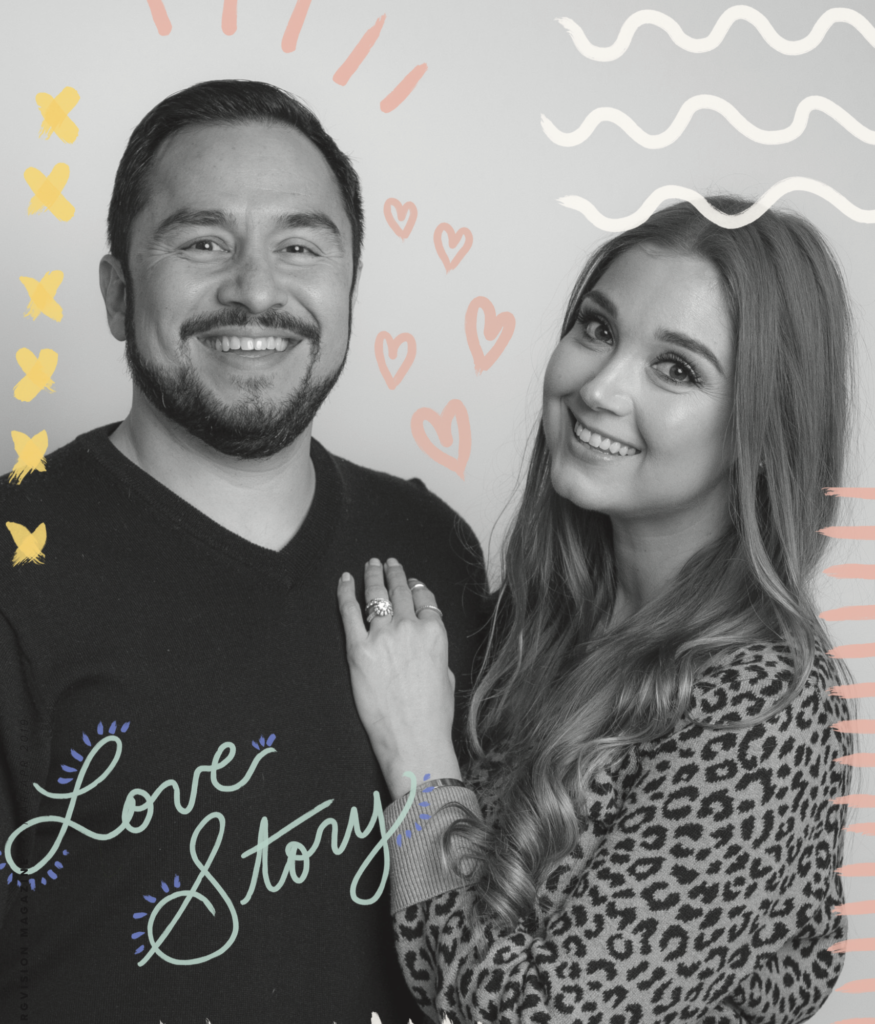 “I didn’t sleep well on the flight,” Rick said. “I’m tired, hungry, and sleepy. I’m totally sick but, not wanting to complain, I stay quiet. While everyone else is admiring the scenery, I’m wondering how long it will be before we get there. It was an hour-and-a-half that felt like two weeks long.”

At last Denise’s mother turned and saw the ghastly cast to his face, asking him how he felt. Too weak, sick and tired to hide it any longer, Rick admitted he wasn’t feeling well.

Switching to the front seat saved him for the rest of the ride to Villa Tummelchen, a lovely bed & breakfast-style hotel, tucked directly into the mountain side in Cochem. Since their luggage was lost, they settled into the hotel and decided to visit Cochem Castle after lunch.

“I was hoping the time might be in the castle,” Rick said. “At the highest point of that castle, I would walk up to her and propose.”

However, not only was a large part of the castle not accessible to visitors, neither was the top level, top floor, or the lookout tower.

“Only the main gate had a romantic look. The rest of the castle looked like ugly rock. I thought, ‘no.’ It just didn’t feel right,” Rick remembered. “I still felt the effects of the motion sickness. We smelled and hadn’t showered or changed. We didn’t have clothes even if we had. So we spent the rest of the day and next finding clothes, resting up, visiting Petra’s mother, getting our bearings for the rest of the trip.”

Day three began with high hopes for Rick that this would be The Day. He and Denise had planned a short trip over to visit Koblenz, where Denise was born to her mother and military dad.

“I knew this would be The Day. It was where the Moselle and Rhine Rivers meet, a spot defined on maps everywhere,” Rick said. “My plan was to have us go to this exact spot and there I would propose. It was perfect!”

Rick had looked at the map and guesstimated the walk from the train station to Deutsches Eck, the German Corner, to be about a mile. They would casually walk along one river until it met the other, arrive easily at Deutsches Eck and he would propose. Off they went.

“The city was beautiful, the streets impeccable. I was totally enjoying the walk.” Rick and Denise were relishing this re-telling, breathing in that memory of the city air as their story unfolded. Then reality began to unfold. “We were wearing brand new clothing, which hadn’t been washed. The underwear and shorts are stiff and starchy.”

“As we walked, my shoes didn’t fit right and I was getting huge blisters on my heels,” Denise said. “It was also longer than we expected, maybe 3 miles.”

“It took over an hour to get there,” Rick said with a grimace. “By the time we get to the Moselle and the Rhine, that exact identifiable moment, I’ve got a rash between my thighs. I feel like I’m bleeding and I keep checking my leg to see if the rash is starting to bleed.”

Both are hot and sweaty, hungry and cranky, but Rick is still determined to do the deed — kneel before his princess.

“We walk to the exact point and I know she’s not expecting it,” he said. “I call to her, ‘Come over here. Let’s take a picture.’”

“Let’s find a restaurant then get some flip-flops,” she replied, heading for the main street. “There’s nothing special here.”

Denise continued even as Rick made a final plea.

“Really! It can be special for us!”

“The only thing on my radar was food and flip-flops,” Denise said. “He had convinced me a proposal was out of the question so I wasn’t even thinking along those lines.”

Rick remembered thinking, “Oh, my goodness, this woman does not realize what’s in store for her. She’s about to get proposed to and she’s giving me attitudes!” 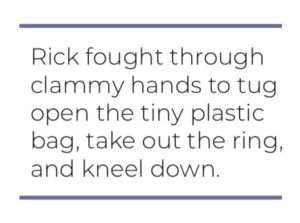 Reining in again, they finished their day.

Day four arose, as did Rick’s hopes for yet another attempt at a proposal. Today would be a trip to Cologne and the magnificent Cologne Cathedral, a World Heritage Site and easily found on a map. Rick formulated his new plan.

“I discover we’re able to take the spiral staircase to the very top and see the whole city and countryside,” he said. “Perfect! We’ll go up to the top and I’ll propose there.”

After buying their tickets, they began the climb and Rick checks his pocket, ensuring the ring is where it belongs. About 80 percent of the way up, they come to a landing for viewing and benches for resting. Here Denise decides to stop, discovering a new fear of heights. All of Rick’s pleading doesn’t budge her.

“Baby, you’re going to miss it. It’s the perfect place,” he told her. “You’re going to love it! You don’t know what you’re missing.”

Seeing nothing would move her, he decides to run up, take a picture to show he’d made it, come back down, get her and climb back down.

Meanwhile, John comes to the landing and teases his daughter until she agrees to climb up. Arriving at the top they find no Rick, who had not been allowed back down the way he came, forced to take another spiral staircase back to the landing. Upon reaching the landing again, he finds no one — no Denise, John, or Petra.

“I think I’m being punked but right before I panic, I find Petra and learn what happened,” Rick said. “I think to myself, ‘Denise doesn’t even realize what she missed.’”

The day in Cologne ends and they arrive back at their hotel and get ready for dinner. Having a little time before meeting her parents for dinner, Rick and Denise decide to finally take Petra’s advice and check out the backyard of the hotel, which she’d repeatedly told them was so breathtaking.

There they found a stupendous view of mountains, the Moselle River, the little town laid out before them, the castle on the hill, and a lovely bench sending romantic messages into the air.  Rick fought through clammy hands to tug open the tiny plastic bag, take out the ring, and kneel down.

“My voice is choking up, my throat is closing, and as I slide down beside her, my right knee lands on a pebble that sends a piercing, sharp pain up my spine, but I’m thinking, ‘Too late. I’m all in,’” Rick recalled. “I’m kneeling on this pebble, reach out, and she’s not even looking at me. She’s looking at the pictures on the camera.”

Knowing it was now or whenever, Rick said the words he’d practiced.

“Love, would you be my princess forever?”

He had done such a superlative job of convincing her the proposal wouldn’t happen on this trip that she didn’t believe it was actually happening.

The deed was done, the truth was told and a resounding “Yes!” was finally heard.

Rick and Denise were, at long last, engaged.