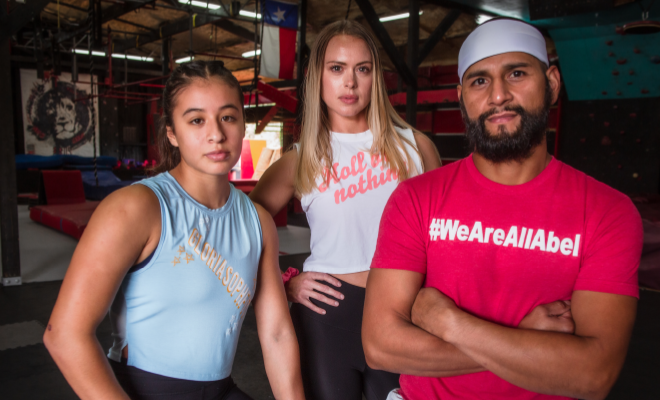 When translated from Greek, “Axios” is a word that means “worthy of,” a phrase that Greek soldiers would call themselves before heading out to battle to look for an opponent.

In the show, hundreds of people across the nation go through a series of obstacle courses for a shot at a cash prize. Gonzalez, who has been competing in the show every season since 2014, is the owner of the Mission-based Axios Warrior Academy Gym. He was the first from the Rio Grande Valley to be on the show.

“It requires you to be so well-rounded and know your way around so many different things from rock climbing to trampoline jumping,” Gonzalez said of the training required to be on the show. “I’ve always been athletic and have trained myself to keep myself at a high level of athleticism to be well-rounded. I saw [‘American Ninja Warrior’] and knew that was what I needed.”

Cavazos, who is a Mission resident, and Orta, a Brownsville resident, were also the first from their respective cities to compete in the show.

To train for the show, Gonzalez remodeled his gym to create obstacle courses similar to the ones on the show for him and others to practice.

“At the time, the only ninja training academy was in Houston,” Gonzalez said.

Among those who joined the gym were Cavazos and Orta, which is how the trio met.

Cavazos said she joined the academy to remain active while recovering from a herniated disk. Orta, the youngest of the group, was simply looking for a new exercise now that she had graduated high school and was no longer part of her school’s swim team.

“I asked my swim coach what to do now that high school ended and he recommended Axios but I wasn’t sure and thought it would be just for kids,” Orta recalled. “When I went in for my fist class, I almost walked out. It looked so playful to me. Then, I tried doing the courses and I was not prepared at all — I could barely hang on to anything. It was difficult, but I’m glad I moved up in a short amount of time and kept going.”

As a mother of three, Cavazos said she joined the gym due to a love of adrenaline.

“I love high-intensity activity and tried the mobility class offered there. I took it just for fun and a few weeks into it, I even got my kids into the kid’s camp offered there,” Cavazos said.

“After a few weeks Abel said ‘Hey you’re pretty good at this, you should try out for the show,’ so I started training with him several times a week,” Cavazos said.

The training for the trio consisted of going through obstacles and strength and conditioning training exercises such as yoga and gymnastics for two years.

Last December, they sent out applications, which included a video of the team showing off their skills at Axios.

“And after that, you just hope to get a call back,” Cavazos said. “There’s 70,000 people who apply and they select usually 600 contestants. Because of the COVID-19 pandemic, the start of production was postponed. We didn’t even know if there would be a season 12.” 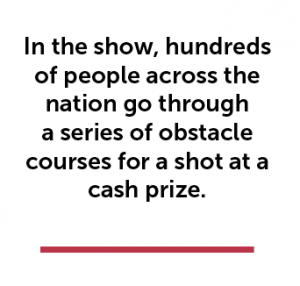 Usually, the show films in several cities across the state, but because of the pandemic, the entire season was shot in two weeks at St. Louis that month. Social distancing precautions were implemented, Cavazos said, and masks were only taken off while on the obstacle course.

“Walking up to that course was surreal — a dream come true for me,” Cavazos said. “In the moment, I zoned out and felt ready to do what I was there to do and apply everything I trained for. I felt a lot of pride not just for Mission, but the Valley as a whole. I feel so excited and honored to represent the RGV.”

Orta was ecstatic at the opportunity to compete with two individuals she considers to be older siblings.

“They are just the most wonderful people ever — the Valley could not have asked for better role models to look up to,” Orta said of her teammates. “I am in awe of everything they do on the course and outside of it. It’s an honor to even train with them. They always dare me to dream more. I wouldn’t have applied if it wasn’t for them.”

Gonzalez, who was the only team member to finish the obstacle course in the episode, said he hopes to inspire more people to be athletic in an area known to have a large population at risk for health issues.

“I have rheumatoid arthritis and I’m not even supposed to be moving,” Gonzalez said. “We’re in an area known for not being healthy and I was still able to go on national television to compete with the best of the country representing South Texas. Just because we’re here doesn’t mean you can’t be successful.”

Did you tune in to watch these Valley natives on American Ninja Warrior? #JoinTheConversation at facebook.com/rgvisionmagazine.