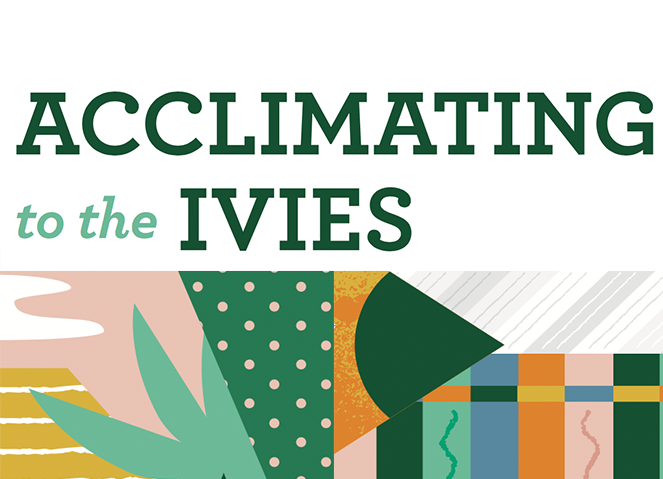 After graduating with a 3.98 GPA from a high school in one of the most underserved and unrepresented areas in the United States, Michael Vargas could have gone to many, if not all, Texas-based schools. However, his heart was set on achieving his full potential. Despite growing up in a financially challenged family where he would be the first to attend college, he applied to an Ivy League university. It was a heavy decision to apply, but one he was glad to have followed through on when he got a life-changing offer.

“When you get a full ride to one of the most expensive and prestigious schools in the country, you have to take it,” Vargas said. He found himself as a freshman Brown University, stepping into college for the first time — and a great deal of culture shock.
Not only was the weather notably colder than what he was accustomed to (Vargas got to experience what 13 degrees felt like during his first winter), his new peers lived in a completely different economic situation. “I saw what real wealth looked like for the first time in my life. … It was a whole new world,” he said. “I was bumping elbows with rich kids that I recognized from magazines and media. It was pretty surreal to sit next to the sons and daughters of famous people.”

How Diverse are the Ivies?
The widespread wealth of his peers was not just Michael’s imagination. A recent report by the Jack Kent Cooke Foundation (a private, independent foundation dedicated to advancing the education of exceptionally promising students who have financial need) found that only 3 percent of students in the most selective schools come from the 25 percent of families with the lowest incomes, and 72 percent  come from the wealthiest 25 percent of the U.S. population.
One measure of the economic diversity of a campus is the number of students awarded a Federal Pell Grant. Though not a perfect metric (foreign/international students are not eligible for Federal Pell Grant, among other factors), the program (which provides need-based grants to low-income undergraduate and certain post baccalaureate students to promote access to postsecondary education) is useful to illustrate the difference in student body economic demographics.
Out of the 6,302 students that attended Brown University in 2015, there were 1,095 Pell Grant recipients at Brown — approximately 17 percent. According to Brown University’s financial aid website, the percentage of undergraduates receiving Pell Grants has increased 11 percent over the last five years. While that’s a positive indicator that the expansion of the Pell Grant program is increasing economic diversity at Ivy League universities, the Cooke Foundation study states that colleges described as having competitive admissions have increased their Pell Grant recipient percentage up to as high as 42 percent. Topping the list of economic diversity among public universities, New Mexico State University has awarded a Pell Grant to 88 percent of its students. In the Lone Star State, Texas A&M Kingsville stands at 80 percent. 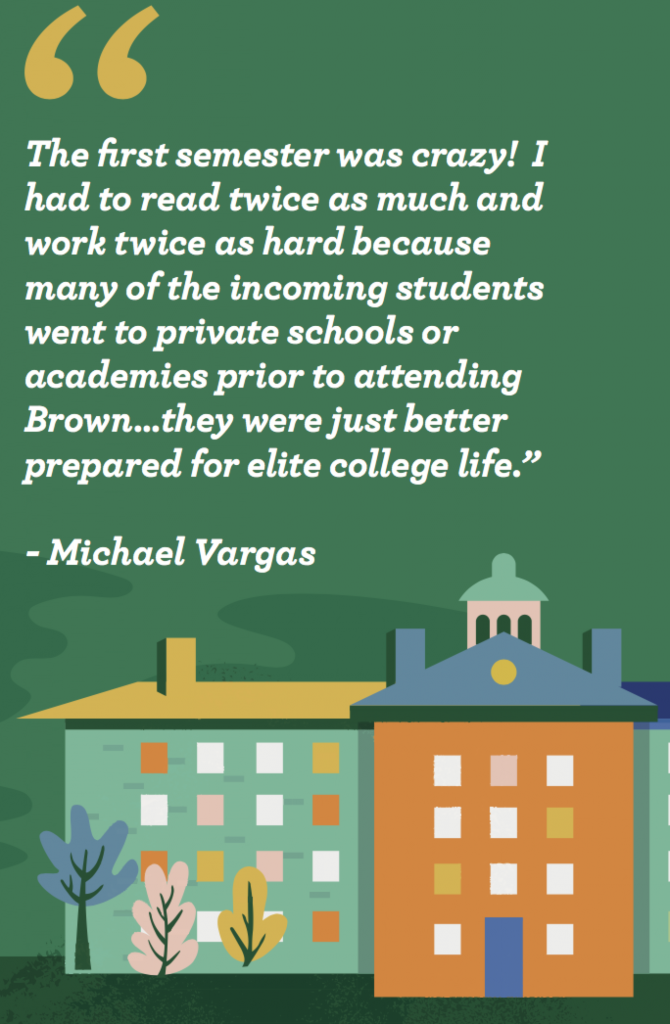 Paula Garcia, executive director for Teach For America, says she observes many interested students put off from applying by the price tag, expectations, and culture shock associated with the top-tier schools. “Many times, kids just find it easier to stick close to home or to return to home after they have been away at school,” Garcia said. “Families can be enabling.”

Vargas found firsthand that the first obstacle he and many RGV students face is not gaining academic acceptance, but finding support both financial and emotional. “There can be so many mental and physical obstacles placed in front of you,” he said. “Parents and family culture have a lot of weight in this decision.”

Vargas explains that low-income kids get accepted to top-tier schools all the time, but don’t feel that they can afford to go. What students and parents do not fully understand is that there is a sizable amount of money available through grants and other forms of financial aid, but they need to be educated on where to look. He envisions mentorship as helping to educate families and guide them through this process.

“Out of benign ignorance, parents often make the decisions for their kids, resulting in them not furthering their education or achieving their full potential,” he said. “They are qualified for scholarships and financial assistance, but parents and students often do not think that they are deserving of this money.” Vargas says students need to know that they are doing the right thing by asking for help and must be validated in pursuing higher education for themselves. “Students need to know and understand that they are worthy,” he said.

Worthy of the World

Garcia feels that many students coming out of the RGV are suffering from “Imposter Syndrome.”  “Children who have grown up in poverty, as minorities, with English is a second language, or first generation immigrants often suffer from self-doubt that comes with their culture, upbringing and background,” she said. “Even the most educated and college-ready student has to navigate through obstacles, and some give up on the process too easily.” She adds that Teach For America wants to keep students from self-segregating out of Ivy League or tier-one schools. “Often students feel like they are not good enough and worry when they don’t understand the rules, processes and even the overall wording or language of applying for these schools. We try to move the mental and physical obstacles that have been placed in front of them,” she said.
She explains that Teach For America educators teach three basic principles to help their students develop the confidence to attain their highest potential. “Number one is the ability to set goals and meet goals. Number two is having the grit and being resilient; knowing that obstacles are opportunities. And number three is having awareness and self-efficacy; knowing what you don’t know, and educating yourself in the process.”

Struggles to Succeed
Low-income and first generation students may find struggles in Ivy league classrooms as well as with the campus culture — but they aren’t insurmountable. They just need to remember that they’re in school to learn and not to play keeping up with the Joneses, and find the support on campus to help them succeed with their studies. According to the Cooke Foundation report, “The lucky few low-income students who get into top colleges and universities have proven that they can handle the most challenging academic work because 92 percent graduate and do well academically.”
Brown University took a strong step to support its student body with the opening of the First-Generation College and Low-Income Student Center on Sept. 16, 2016. Graduating long before its opening, Vargas did not get to benefit from Brown’s new center; he admits that his first year there was an uphill battle. However, he still managed to get his bearings, hunker down, and flourish.
“The first semester was crazy!” he said. “I had to read twice as much and work twice as hard because many of the incoming students went to private schools or academies prior to attending Brown. They were just better prepared for elite college life.”
Vargas says he spent more time studying than his classmates his freshman year, but things started to click after that. When asked what kept him going when times got tough, he said he had no thought of quitting. “I felt the reward would be worth the work,” he said.

Reaping Rewards
A recent article from the New York Times confirms his theory. “Even though low-and middle income students face challenges that other students do not, lower-income students end up earning almost as much on average as affluent students who attend the same college,” it states.
In 2009, Michael graduated with a degree in political science on time, just four years after leaving home. He joined Teach For America post graduation to share his experiences, and advised potential college students be open-minded and grow their network. “Be ready to embrace your mistakes,” he says, adding that the people you meet from school can connect you with people and positions that will become the initial stepping stones in your career. “Open doors, jobs, and positions come from the networks you build.”
Michael now works for a political leadership organization based out of  Washington, D.C., called Leadership for Education Equality. Vargas also sits on the school board for his former high school district.   “Because of the issues I faced coming into school, I had this gravitational pull to work towards helping other students,” he said. “I took advantage of my opportunity to give back.”

Michael is not alone in working to help remove the roadblocks and concerns for the next generation of RGV students. There are great groups like Teach For America helping to break down boundaries, setting examples, and giving back to the community. “Tier One” universities are becoming a real option for graduating RGV students and increasingly, these schools are becoming more attainable. As more RGV students find their way onto top tier campuses, they will change the campus culture with their presence, ideas and opinions. However, regardless of the environment they find themselves in, they have proven with their acceptance that they are worthy; they worked hard to pursue their education and have the dedication to use it, like Michael Vargas, to change their lives.