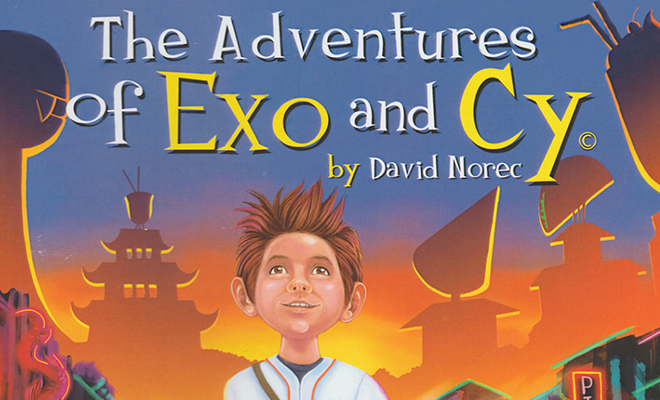 Most people would assume that reading a book would be a passive, sitting activity, but children’s author David Ceron isn’t most people.

Ceron, a former teacher, created an innovative and interactive story designed to educate its readers while getting them up and moving: The Adventures of Exo and Cy.

He reversed the letters in his last name to create the pen name David Norec. 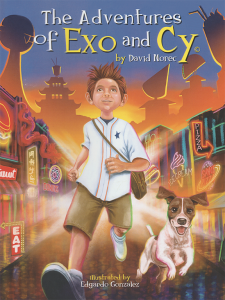 The story behind the book is one of loss. Diabetes took its toll on Ceron’s family. In 2013, he lost his brother to a long battle with the disease. In 2014, Ceron’s sister died due to complications of diabetes.

“Anybody who knows somebody with diabetes knows that it kills slowly and painfully,” Ceron said. “Losing two siblings in back to back years was so difficult.”

Several months after losing his sister, Ceron sent up a prayer while driving home.

“‘If you want me to do something different with my life, Lord, put it in my heart right now,’” he recalled saying. “And so the idea of writing a children’s book, calling it The Adventures of Exo and Cy — which is a play on the word ‘exercise’ — came into my mind.”

The book is full of plays on words that tip off readers to characters’ and places’ true intentions. It features a boy, Exo, and his dog, Cy, who live in O.B. City (obesity) — overseen by Mayor Diane Beeties (diabetes) and Chief Will Ness (wellness). There, Exo and Cy work to thwart a bully, Chip, and his bulldog, Nacho. Throughout the adventure, instructions call on readers to mimic the actions of Exo and Cy, such as completing a series of 20 lunges to get across a board connecting two buildings, or doing high jumps for 30 seconds to avoid rolling baguettes.

“By the time they finish reading it, they’ve gotten an exercise workout,” Ceron said.

In all, Ceron has planned for seven books in this series. The next one will feature a girl, Aero, and her cat, Bix — aerobics. Ceron aims for all four heroes to team up by the final volume to save their city. 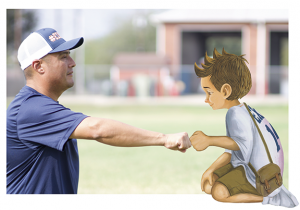 Richly illustrated by local artist Edgardo Gonzalez, the first book took about six months for Ceron to write. That span of time was punctuated by an unexpected blow — Ceron himself was diagnosed with diabetes.

“I was pretty upset about that at the time because here I am, I’m thinking I’m doing something good to try to educate kids and people on diabetes, and then I have diabetes,” he said. “Actually, it turned out to be a blessing in disguise because now when I go present and speak to people, I’m coming with that background of not only having people I love diagnosed with diabetes, but me, myself — so I know a lot of the stuff, the insulin, the other medications that doctors prescribe for diabetes.”

Ceron added that taking those kinds of medicine isn’t fun — and it’s expensive. That’s all the more reason to combat type 2 diabetes with healthy eating and exercise.

The community has taken note of the power of the message within The Adventures of Exo and Cy. Ceron won the McAllen Chamber of Commerce’s GoodPitch Competition in 2018. Last year, he won the chamber’s innovation grant, which has helped him fund printing. Teachers and principals at local schools have also been impressed with Ceron’s book and accompanying presentation. Ceron has students standing and acting out the exercises throughout the book.

“We’re all up, we’re moving, we’re exercising and we’re having fun,” he said. “We’re reading a book that is educating them on healthy eating and healthy living.”

In 2019, the McAllen-Edinburg-Mission area received the dubious distinction of being named the fattest metropolitan area in the United States by a Wallethub study. Ceron recognizes that the region has its work cut out for it to get healthier, but hopes that The Adventures of Exo and Cy can be a first step.

“With proper exercise with good healthy eating, we can reverse this,” he said. “We can take the ‘die’ out of diabetes if we do things right. It’s going to take time. It’s going to take effort. We can change the culture of the Rio Grande Valley, and I hope that I can, years down the road, meet people who this book helped.”

And as he continues to write six more installments of his series, Ceron plans to release each new book every Nov. 17.

“Nov. 17 would’ve been my sister’s birthday and this is Diabetes Awareness Month, November,” he said. “I think it’s perfect in the month and on the day to honor my sister and all those who have been affected by diabetes.”

Ceron also looks forward to translating the stories into Spanish so he can present the concept in Mexico and other Spanish-speaking countries — taking Exo, Cy, and other characters global.

“I want to make myself available to go to schools and present — or libraries, wherever. Whoever will take me in,” Ceron said. “I think we need to spread the word. Hopefully, we can change some lives.”

Purchase The Adventures of Exo and Cy through Amazon, DavidNorec.com, through David Ceron himself, or, soon, at local Barnes & Noble stores.

What are some of your favorite children’s books? #JoinTheConversation at facebook.com/rgvisionmagazine.