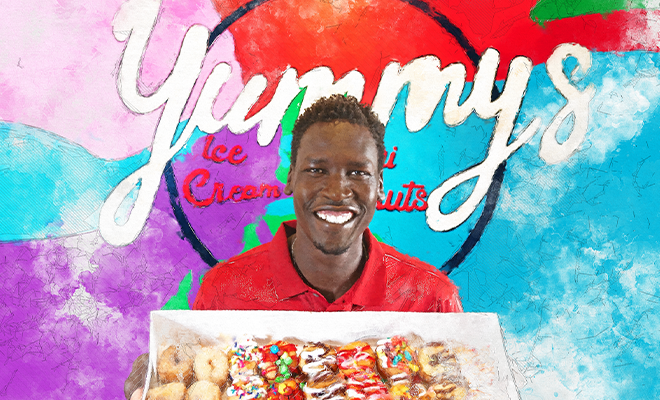 The Rio Grande Valley is known for its rich blend of cultures thanks to its location on the U.S.-Mexico border. Two countries, two languages, but a heart that lives on both sides of the river. What brings us all together is food. Everyone eats — and we eat a lot here!

In addition to enjoying traditional, savory flavors, the majority of the Valley has a sweet tooth. Local business Yummy’s Mini Donuts and Ice Cream has satisfied that craving by adding loads of sweetness to our palate in the short time that it’s been open.

Yummy’s owner Peter Jurkin grew up in Sudan, long before coming to the RGV in 2019. Standing at 7 feet tall, well over the average height in the Valley, Jurkin was able to compete as a college and professional basketball player in the U.S., traveling around the world for many years.

Before coming to the RGV, he lived in Charlotte, North Carolina, and was no stranger to moving, but this time he wasn’t playing basketball anymore. After the first signs of the coronavirus outbreak, professional basketball was no longer a viable option, and Jurkin had to improvise.

As Jurkin settled into his new life in Harlingen, he searched for a place that would help him feel at home —  a gym.

After finding Pistokache Training Facility in McAllen while searching online, he made his way over from the Lower Valley. He felt at home the minute he stepped in the door for the first time since he moved. 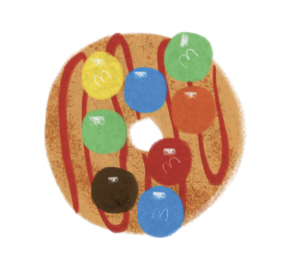 Settling into his new surroundings, Jurkin was anxious to find a job — with no immediate luck. Having worked in her family’s restaurant for years, Jurkin’s wife, Rebecca Garcia-Jurkin, experienced the sweet taste of success because of hard work firsthand.

Every morning, Jurkin made the 45-minute commute to train at his newfound gym, and every morning, he drove past the location that would eventually become Yummy’s without even realizing it.

The narrow space next to Tacos Kissi on 10th Street just north of Business 83 was the perfect spot, and so it became Yummy’s new home.

His wife encouraged him to find a job, but going from playing basketball professionally, Jurkin found his job search to be a challenge.

As he searched, he drove for different third-party delivery services and assisted his wife at her family’s business, Blanquita’s Mexican Restaurant, in Harlingen.

“I was just looking for something part time,” he said. “Something that would allow me to come and go dependent on the basketball season.”

But no such luck ensued.

Traveling for basketball, he spent a lot of time in airports, and always gravitated towards candy shops full of vibrant colors and sweets. Jurkin dreamt of a place people could come in for a sweet, refreshing snack while hanging out in a relaxed environment.

“In Sudan, we didn’t have a lot of sweets,” he recalled. “So I figured, if I have my own candy shop, I’ll be surrounded by candy all day.”

Eventually, he and Garcia-Jurkin decided that he would open up his own place. Jurkin figured he could start something up and train someone to run it if and when he went away to play again.

They had the idea to create a mini donut and ice cream shop to serve up treats to cater to those with a sweet tooth, so he expanded on that thought after consulting with his mother. Digging into memories from his adolescence, Jurkin experimented with his mother’s recipes near and dear to his heart.

“The mini donuts are not my idea, they’re my mother’s idea,” he said. “She has been making those same donuts from her house and would do catering. I wanted them to be sold in a shop somewhere, but for her, she said it’s too much work, 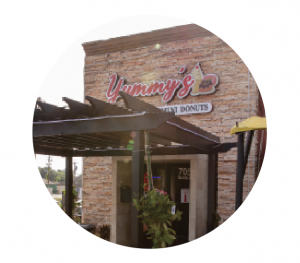 Ironically, Jurkin was not a fan of donuts. He was more focused on the ice cream component of the shop. His mother taught him how to make the donuts. He followed her recipe and learned how to operate the mini donut machine.

Upon mastering the mini donut flavor and texture, the next order of business was presentation.

Jurkin’s mother advised him on decorating the donuts with pops of color and tasty glaze, and his imagination ran wild. This day and age, the more visually appealing a dessert is, the more likely people are going to take a photo and share it on social media.

He incorporated nostalgia and color into his topping options, like Fruity Pebbles, M&M’s, and colorful sprinkles, along with walnuts, almonds to complement the Nutella, peanut butter, and original glazes. Powdered sugar and cinnamon sugar were also added, and the overall look was locked in.

Next was the name. Jurkin had his mind set on choosing something simple that kids would remember. And when he and Garcia-Jurkin were driving, a popular song started playing on the radio and inspired the shop’s name.

Despite not being a Valley native, Jurkin has embraced Valley culture and left his own mark on it since coming here.

He planned his opening for March of 2020, but he found himself head-to-head with the economic impact of COVID-19. Upon opening Yummy’s doors, the couple was forced to shut almost immediately. With the stay-at-home orders issued and the collective anxiety of contracting and spreading the virus, it was a slow start for them.

Every day, Jurkin would wake up, train in McAllen, head back to Harlingen and deliver for Blanquita’s from 8 a.m. to 5 p.m., then head back to McAllen and open Yummy’s from 6 to 9 p.m.

“For the first couple of weeks, it was just me, myself, and Netflix,” he said. It was during this downtime that he created the memorably colorful mural inside the shop. 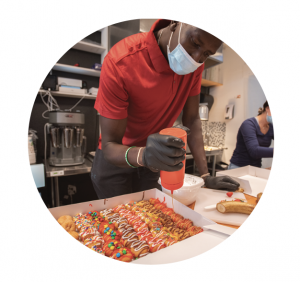 The Jurkins knew that they needed to do something different because simply promoting the donuts and ice cream wasn’t enough — delicious and colorful as they are.

“We were open, but people were not coming,” he recalled.

After strategizing and bouncing ideas back and forth, his wife told him that he needed to show his customers who was behind the treats in order to gain interest in the sweet shop.

Jurkin was skeptical at first, but as soon as he started posting photos of himself inside Yummy’s, the comments and customers started pouring in. “People starting commenting, ‘what made you move down here?’” he laughed, “Like, ‘what are you doing here?’”

“[The] beginning was tough because no one had even heard about the place,” he said. But it didn’t take long for a mini-donut craze to catch on thanks to the social media posts. People’s curiosity about Jurkin himself brought customers to Yummy’s, but the donuts are what made them keep coming back.

Each box of Yummy’s mini, bite-sized donuts is specially decorated to the customer’s liking with crumbles and glazes to top them off. The Jurkin’s parcels of sweets are Instagram-worthy from every angle.

Local Valley food vlogger Ismael Martinez of “Fork It” even featured the donuts in one of his Instagram posts, joking that he brought a box of donuts home and his kids ate them so fast that he barely got to eat one in time.

At one point in early June, Jurkin looked up from topping donuts and noticed the line of customers curving outside in the parking lot. He was stunned. And working alone.

He thought to himself, “this has to be a joke — somebody must be pranking me and paying people to stand outside so they could see me panic.” Although he was tempted to, he did not panic.

He did everything he could to keep the line moving while working the shop alone — taking each order and then proceeding to top one mini donut topping at a time prior to closing out each tab. And every time he looked up, Jurkin noticed the line growing. 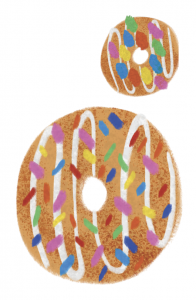 “It was something that we didn’t even prepare for at all,” Jurkin said. “We got stormed by all the people and we ran out of donuts. We weren’t prepared to have that many people at one time. Seeing all that support was a blessing.”

Thankfully, the surge in customers came hand in hand with the opportunity to hire and train a crew, and things started to look up despite the rough start.

By early August, Jurkin’s mother had sent over new flavors that would add more variety to the menu. Glazes are also now available in lemon, vanilla, raspberry, and marshmallow.

By mid-August, Yummy’s launched their latest addition to the menu —  waffles.

All three menu items —  mini donuts, ice cream, and waffles —  can be customized with any variety of toppings imaginable.

Jurkin summed up the ups and downs of the past few months in a heartfelt statement:

“To see people really care and come out and show their support,” Jurkin said. “It’s telling us we’re not here alone. We’re all together.”