McAllen city attorney Kevin Pagan first had the indication that there might be a problem with flooding in the city the day before it happened. On Wednesday, June 20, the Mid-Valley experienced a deluge.

“What we were responding to was a request for mutual aid,” said Pagan, who is also McAllen’s emergency management coordinator. “When there are cities having problems that overwhelm that city’s ability to respond, we call on our sister cities in the area. McAllen had actually helped respond to some of the events on June 20.”

And by Thursday morning, June 21, McAllen would be experiencing a flooding event of its own.

“Some folk are not aware of this, but the systems within a particular city, including McAllen, are heavily dependent on systems outside of our city — the county drainage system that takes the water out of a city and eventually over to the Gulf,” Pagan said. “So it was clear to me that those systems were going to be at or near capacity Wednesday night. Going into Thursday morning, if there was significant rain, then we would have to deal with the fact that those constraints would already be upon us.”

Pagan joined McAllen Mayor Jim Darling and other city, weather, and disaster response officials during a town hall meeting held July 5 at Las Palmas Community Center in McAllen. Community leaders recounted the events of the June 21 flood, which left over 20,000 homes impacted in Hidalgo County. The meeting was aimed at explaining the incident to the public and distributing information on recovery resources.

“I know how serious it is for almost all of you out there,” Darling said at the start of the meeting. “Hopefully there will be an avenue to recover and that’s what obviously what we’re all here for.”

Residents affected by the flooding can apply to the Federal Emergency Management Agency for aid — President Donald Trump signed a federal disaster declaration July 6. In McAllen alone, 2,700 homes had water in them, according to city engineer Yvette Barrera.

The high volume of rainfall in a short period of time made problems crop up quickly, said Barry Goldsmith, warning coordination meteorologist with the National Weather Service in Brownsville.

“A category nada, no hurricane, can produce a problem — don’t ever forget that,” he said. “It’s super-duper important to remember that the Valley floods, period.”

At 7 a.m. June 21, hard rain began to fall in Mission, eventually spreading to McAllen at a rate in excess of 1 inch per hour. By 8 a.m., Pagan was receiving calls of flooded streets and intersections.

“A lot of folks are not aware that the streets themselves are actually part of our drainage plans,” he said. “For the City of McAllen, the underground drainage is designed for the water to runoff and be removed from the city, but once that system reaches its capacity because of the rate of rainfall or because of the amount of rainfall received over a period of time, then the next stage of the drainage plan for the city is for that water to collect into the streets and stay within the curbs of various streets.”

This makes it difficult to drive, but ideally keeps the water away from homes and businesses, Pagan explained.

“I noticed something that disturbed me, that concerned me quite a bit, and that was that there was no pattern to where these rescues were occurring,” Pagan said. “They were occurring again in almost every quadrant of the city of McAllen.”

By noon, Darling declared a state of disaster in the city to free up additional resources. And amid the deluge around 11 a.m., first lady Melania Trump landed at McAllen-Miller International Airport to visit migrant children separated from their families.

“It’s never just one thing that happens in these events,” Pagan said.

After about an hour of hearing from McAllen officials and disaster response leaders at the town hall meeting, a woman in the audience stood up.

“I personally along with so many of us here don’t want to go through the process of either being evacuated from our homes or needing this assistance,” she said. “What is the City of McAllen doing for future drainage?”

Murmurs of assent and loud applause drowned out the rest of her comments. Darling responded with information on the bond passed in May that allocated $25 million for drainage and traffic improvements in the city — and a caveat.

“I have to tell you in all likelihood, even with the improvements that we did with the new bond issue, we still wouldn’t have avoided all the problems that we had,” he said. “Even if we provided the best drainage in the world, in the city of McAllen, we still have to get our water out of the city through other jurisdictions.

“It’s a countywide situation, number one. And number two, you can’t build a system that would meet this amount of rainfall. I understand you’re frustrated. It was an unprecedented rain.”

Danella Hughes, the executive director of the American Red Cross of South Texas, urged attendees to be prepared for emergencies. 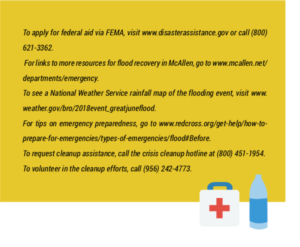 “Please sign up for local alerts and warnings — make sure you stay informed,” she said, emphasizing the importance of having an evacuation plan in place as well as an emergency kit filled with important papers and a three days’ supply of medication, food, and water for every member of a family. Hughes added that the Red Cross had distributed over 21,000 meals and snacks following the flood.

Pagan encouraged McAllen residents to enroll in CodeRed, an emergency message app that distributes information to users. The city developed it to automatically send messages to all landlines, but residents with only cellphones must enroll via the city website.

Pagan also offered advice on residents recovering from flood damage. First, call your insurance provider to make sure you don’t have flood coverage — FEMA will require proof of non-coverage before issuing aid. In some cases, though, homeowner’s insurance will cover flood damages. Document all repairs efforts, including saving receipts, for possible reimbursement. McAllen waived the requirement to obtain building permits prior to repairing flood damages.

> For links to more resources for flood recovery in McAllen, go to www.mcallen.net/departments/emergency.

> For tips on emergency preparedness, go to www.redcross.org/get-help/how-to-prepare-for-emergencies/types-of-emergencies/flood#Before.