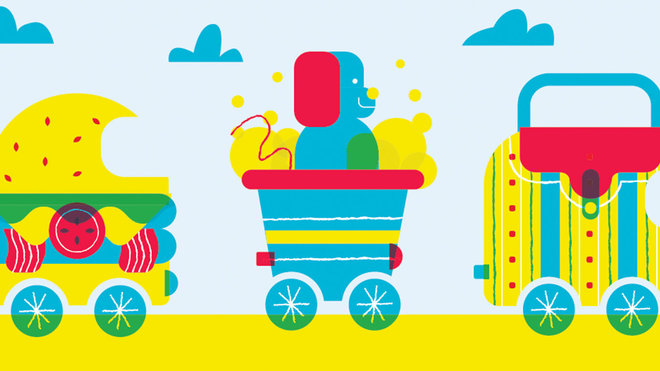 Jym Almazan hated his job as a fork lift operator, so he rolled the dice with a shoestring business venture selling handbags out of his car.

“I was married and needed to make money,” Almazan said. “I started selling knock-offs from the trunk of my car.”

Today he runs a successful business on wheels that takes merchandise to the customer. He credits his wife Monica for pushing him to upgrade from selling cheap replica handbags into handling high-end designer brand names like Michael Kors and Louie Vuiton.

“My wife works behind the scenes,” Almazan said. “She’s pretty much the one that tells me what we’re going to do.”

With the help of Monica and son Kalvin, Arm Candy Boutique was born more than a decade ago and now sells name-brand fashion accessories out of two Ford buses that are set up as on-the-road showrooms.

Arm Candy Boutique was created at a time that mobile businesses were really just getting started. It is a business model that has boomed in recent years with everything from food trucks to services.

“There’s a lot of people on the streets selling things,” Almazan said about the growth of mobile businesses. “You can get someone to come wash your car or change your oil.”

He cites convenience for the customer as the main reason behind the growing popularity of mobile businesses.

Based in Edinburg, Almazan and his son make between 15 and 20 regular stops daily, parking the buses at businesses where employees have requested the mobile shopping experience.

“My son is usually on one side of town and I’m on the other,” he said.

While he started out focusing on handbags, Almazan has expanded his inventory to include other designer fashion accessories.

“We also sell wallets and watches, and I’m getting into expensive perfumes and colognes,” he said.

The Arm Candy Boutique buses, decorated with the company logo and contact information on the exterior, promote the business everywhere they go. Almazan also uses social media to stay in contact with customers. A Facebook page with more than 1,400 followers boasts that phone calls or messages are typically returned within an hour. Once inside the buses, customers find a shopping experience similar to walking into a specialty shop.

“It’s a boutique inside,” Almazan said. “It actually looks like a store. My customers come on board and look at the designer purses and perfumes.”

Quality merchandise is a key to success, he said, but convenience and good prices are popular with customers.

“They like it because they don’t have to go to the mall or look for parking,” he said. “They call me and I can meet up with them.”

The handbags, wallets, watches and perfumes offered are well-known brands that typically carry a high price tag, but the low overhead of going mobile allows Almazan to be competitive with his pricing.

“I’m here to help customers out who can’t afford a lot of expensive items,” he said.

By going mobile the Almazans have found a livelihood that requires a lot of hard work, but something they can do on their own terms.

“I work whenever I want, but mostly it’s working all of the time,” Almazan said. “It’s pretty crazy but there’s nothing like being my own boss and I love doing it. I can’t see myself doing the fork lift ever again.”

Small entrepreneurs like Almazan make up a significant portion of the Rio Grande Valley retail sector, on and off wheels.

The Small Business Administration defines a small business as one with 500 employees or less, but the vast majority of small businesses in Deep South Texas are micro-businesses, or independent enterprises operated by one or two people, according to Angela Burton, district director of the SBA’s Rio Grande Valley district office.

Mobile businesses are playing a more prominent role in this retail segment, as evidenced by the growing number of food truck operators taking their recipes to the streets.

The McAllen Chamber of Commerce opened the Valley’s first food truck park in May 2015 at 1200 Ash Ave.

The chamber maintains the McAllen Food Park Facebook page to promote the venture. With more than 10,000 likes the social media outlet posts information about different food trucks and special events to attract patrons.

“During the week we have about two or three food trucks,” said Luis Cantu with the chamber’s community development department. “During the weekends it changes but we usually have from three to five.”

Cantu said the chamber hosts events like Food Park Unplugged to draw people to increase the number of customers.

“We bring a talent to come and play music while people come and eat at the park and enjoy the evening,” he said.

While several trucks operate out of the food park, others have staked out territory in different parts of the city.

“The advantage of a food truck is that they can operate in different places,” Cantu said. “It’s like having a restaurant but you can’t move a restaurant around to different locations.”

The Mighty Food Truck, specializing in sandwiches and burgers, parks its business at 1303 N. 10th St. in McAllen.

In business since late 2014, owner Amy Gomez had an interest in restaurants and chose a food truck to stake her claim in the world of eateries.

“It’s cheaper than a restaurant,” she said. “It’s easier with a food truck. It’s easy to move around.”

Making a move, however, can have its red tape. Gomez said a contract is required at the location, rent is paid and there must be access to restrooms.

“We started out at a different location with only four tables,” she said. “We moved to a bigger space with seating for about 70 people.”

Gomez made that move last summer and she said business is good, especially weekend evenings.

The Mighty Food Truck also has a second rolling restaurant for catering and special events.

The Harlingen Chamber of Commerce opened space last August in its parking lot at 311 E. Tyler Ave. for food trucks, and it is common to see anywhere from two to five trucks parked there serving up their specialty dishes.

Brownsville, the only major Valley city without a designated location for a food truck park, is debating the best way to go about making room for this growing business model. The city has put out requests for proposals for companies interested in managing a food park and is exploring the needed ordinances to allow the mobile restaurants.

“I’ve been keeping my eye on it as the different cities have started to review their ordinances,” she said. “This is a trending business development and they are having to look at their laws and regulations.”

The expansion of food trucks shows no signs of slowing down in the upper Valley, where Spanky’s BBQ is one of the newer kitchens on wheels.

Owner Fernando Alvarez said he took to the streets in November.

“I’m still pretty young,” he said. “When we first opened up, we were kind of crossing our fingers.”

Alvarez set up shop at the McAllen Food Park and created a Facebook page to promote his menu. Spanky’s BBQ truck also moves around to cater special events.

While he started to gain a following early on, it wasn’t until he placed a brightly colored promotional wrap on his truck (featuring his logo, menu and contact information) that the business really gained traction.

“Before it was just a plain yellow truck with a banner,” he said. “Once we got that wrap business really took off. We even catered a Christmas lunch.”

Alvarez plans to drive his restaurant to South Padre Island to be part of the Spring Break Jam car show in March and Beach ‘N’ Biker Fest in April.

“I started all this with the thought of having my own business,” said Alvarez, who worked in the wholesale restaurant industry for more than 10 years.  “So I decided one day I’m just going to do my own thing.”

Like Almazan and his rolling Arm Candy Boutique, Alvarez has not looked back to the days of working a regular job.

“You’re your own boss,” he said. “You make your own rules. It’s up to you how much money you want to make as long as you’re willing to put in the time.”