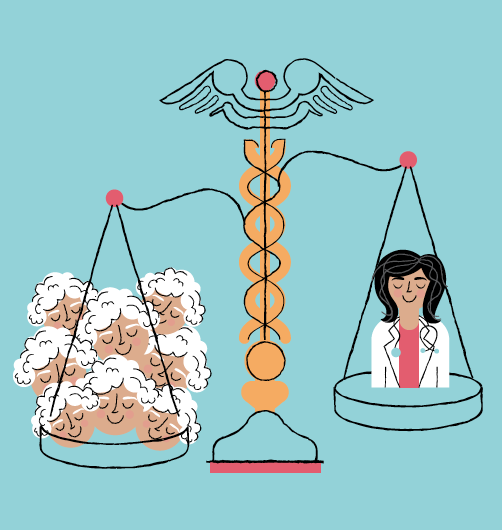 Armando Garza never expected the worst case scenario to happen. As a grandfather, he said he never really much cared for drinking alcohol or smoking cigarettes, but was faced recently with a serious issue to his health.

Garza, 63 and an indigent patient, said he was not routinely visiting a doctor for care, but nonetheless felt healthy. When he went to the hospital in September 2014 complaining of stomach pain, he was surprised to learn he had stomach cancer, which required immediate surgery.

He remained hospitalized from October 2014 to November 2014, and surgeons ended up operating to remove the cancer, but Garza acknowledges it may be too late.

Because he waited so long to reach out to healthcare providers, Garza is now paying the price. He is bedridden with a wound that cannot heal. He is left with an ostomy, which refers to the operation where the intestines are removed. Since the body needs a new way for stool to leave the body, the surgeon creates an opening in the abdomen for stool to pass through.

“We have a fast evolving problem that needs to be addressed before it reaches a tipping point in which it is too late for providers” said Imtiaz Chowdhury, owner of Life Touch Home Health in McAllen. Healthcare providers from Life Touch regularly visit Garza at his home in Edinburg.

McAllen-based Life Touch is a home healthcare agency that provides acute care nursing and therapy services, with a focus to make the patient as independent as possible.

The agency’s main demographic is the elderly. It was established in 2007, and its nurses specialize in a broad range of care including pediatrics, cardiac and oncology.

“I would like to make the Baby Boomer population aware of the future risks they pose to themselves if they continue to neglect their health,” Chowdhury said. “We need to provide them with knowledge and resources to help them take charge of their health.”

In the Rio Grande Valley, there is a substantial influx of Baby Boomers that are uneducated about their health needs.

Doctors in the Valley say they are exasperated about the Baby Boomer generation’s stubbornness, and half-knowledge about the facts when it comes to their health.

“In South Texas we have a big problem with our Baby Boomers, the problem we have is that people of this age were all sons and daugthers of illiterate, hard working labor workers,” said Dr. Erik Tavarez, a physician in McAllen who also referred to his own parents who belong to the Baby Boomer generation. “What that means is that these Baby Boomers went against the current. On their own, they became the first generation of educated Hispanics.”

“At one point, they asked themselves ‘do I work hard in the labor camps or do I go against the current and those people who tell me I can’t do it? I’m going to show them I can do it.’ That’s the concept these people have,” Dr. Tavarez said.  “The problem I have with these same people is that it’s very difficult for somebody like a physican to come in and tell them that how they have been living their lifestyle has been detrimental to their health.”

As a result, there is a huge amount of people coming into the healthcare system with a high incidence of hypertension, diabetes, heart disease and other serious illnesses stemming from an unhealthy lifestyle.

“As a physician I’m battling with a guy who is overweight, hypertensive, and diabetic since the age of 45 or 50. How do I make him live an additional 20 years. That’s where I have my problem,” said Dr. Tavarez.

The lack of insurance is a problem that affects anywhere betwen 20-30 million people in the US, but the issue agreed upon by health providers is that there is an even greater number of people who lack the education and mentality with regards to preventative care.

In the Valley, the  number of households with persons aged 65 and above are at  25.5 percent, higher than the state average of 19.9 percent, according to a report by the Lower Rio Grande Valley Development Council Area Agency on Aging.

While the total growth in the general population in the Valley has increased by 23.6 percent between 2000 and 2009; its older population increased by 31.8 percent during that same span of time (2000-2009), according to the agency.

As of 2010, the estimate for the 60-plus population in the Valley was about 162,987. The low-income senior population is at 23.3 percent or 37,943, and projections indicate significant continued growth in the general and senior population within the next ten years, according to the Area Agency on Aging.

A Lower Rio Grande Valley Hispanic Elders report also indicated that 28 percent of individuals 65 or older were diabetic. Based on this estimate, the number of diabetic seniors is 30,237. This increases the risk of institutionalization and potential of suffering other conditions such as kidney failure, amputations, blindness and heart disease.

“These people are having these issues that come on, and my biggest concern is they don’t qualify for Medicare,” said Jonsete Reyna, an RN with Life Touch. “These are people that are going to end up in the hospital. They dont know about the whole process, about going back to follow up with their doctor. They don’t get checked regularly. They are the forgotten group.”

“Often, they are close minded about having to be checked,” Reyna said about her Baby Boomer patients. “They didn’t come from a family that was doing the regular checkups. Their health has probably never been a priority, so it’s a big change having to think that it is a priority at this age.”

So what can be done?

As the first Baby Boomers entered retirement in 2011, medical professionals have not ruled out hope for the next wave of retirees, and the verdict is still out for their own children.

Dr Erik Tavarez said he has begun preparing for the influx of Baby Boomer patients at his practice by taking extra time to consult with them.

“With Baby Boomers, I have to give them the rationale. I have to explain to them,” Dr. Tavarez said. “In other words, the way I convince them to listen to me is no longer these five minute visits where I can just come in, give them a prescription and send them on their way. With these baby boomers, I have to take the time to sit there and tell them and explain to them the medical reasoning as to why I’m doing what I’m doing in order to convince them to do what I need them to do.”

Reyna said it’s all about encouraging a healthy lifestyle with her clients.

“I think they do need to think about living a healthy lifestyle, whether it’s watching what they eat or maintaining a healthy weight. That’s one of the key things; exercise and diet. Also, it’s about following up with the doctor. A $50 visit once a year is going to give you an idea of what you’re predisposed to, and it may prevent you having hypertension that can lead to a heart attack or a stroke.”

Garza meanwhile said he pleads with doctors for assistance, but doesn’t hold out hope. His fate rests with attorneys who are advocating on his behalf to get him Medicare early.

“You have to take care of the patients have compassion,” Garza said in Spanish. “For those patients who don’t have insurance, you have to treat them the same, or maybe give them payment plans or options. Don’t turn us away.”