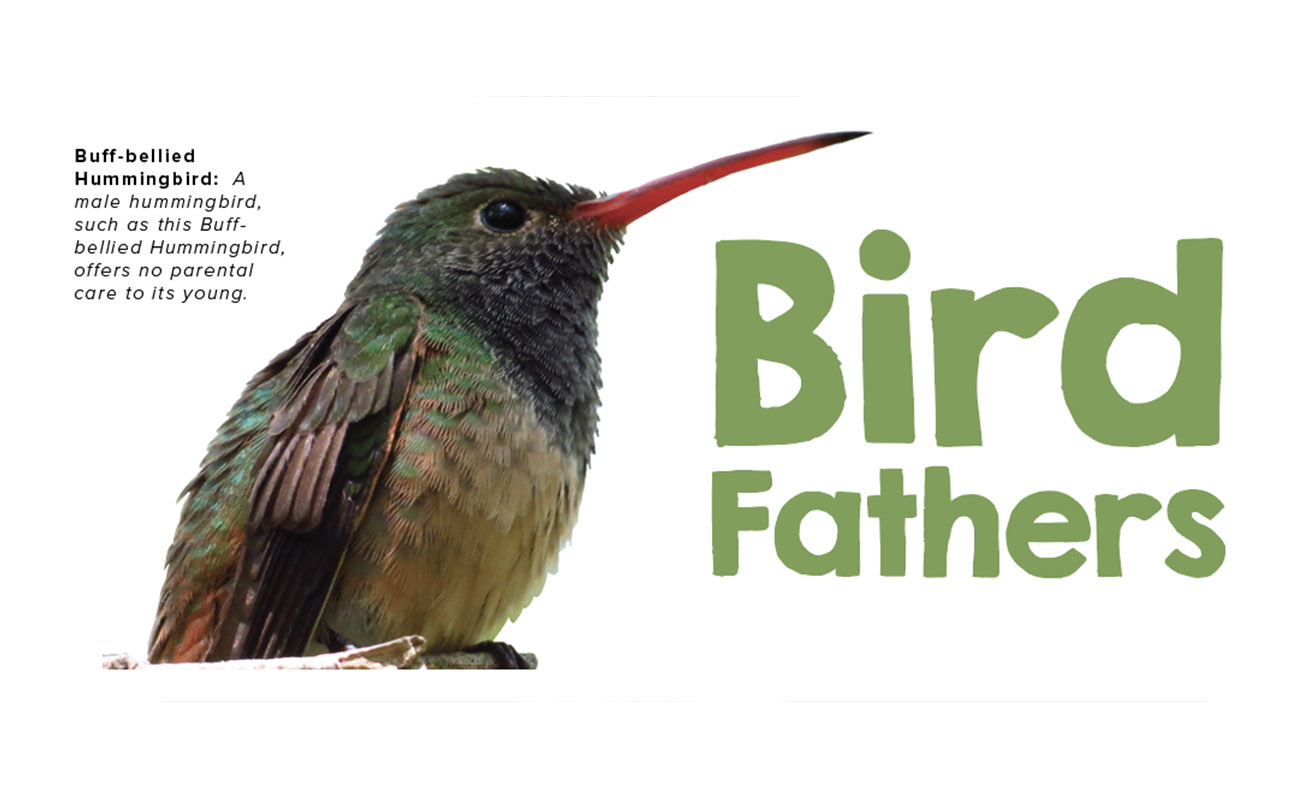 In the world of birds, males play a variety of roles. From territory selector and defender, to incubator and food provider (or sometimes only a female attractor), bird fathers display a wide range of parental behaviors, but all are important to the survival of a species.

As mentioned, some male birds give very little in the way of parental care, and rather their sole purpose is to attract a female. In these species, the displays of the males are often extravagant. Male hummingbirds are a species where the male offers no parental care. But they have displays which, along with their iridescent gorget feathers, are meant to attract a female. Their displays vary, but usually incorporate distinct flight patterns (arcs, for instance) and showing off their bright throat feathers. However, after successful courtship, the two birds part ways, leaving the female to raise the young.

Other bird fathers provide a little more care. Great-tailed Grackle males defend territories from other male grackles with songs, displays, and fighting (sometimes quite fiercely). They will harass and chase potential predators, like hawks; while driving, I often see a distant hawk being chased by a male grackle. However, like the male hummingbirds, they too do not help build nests, incubate, or feed young. 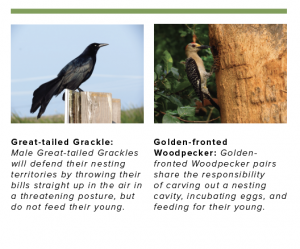 Somewhere along the gradient of parental care was a Rose-throated Becard my father and I watched on a trip to Mexico. The male was “helping” its mate build a nest. We watched the male as he followed his mate around, carrying nesting material like a grocery bag, but didn’t seem to know what to do with it. Eventually he simply dropped the material on top of the nest and flew off, as if to say “See? I’m helping too.” Incidentally, this behavior has been noted by other ornithologists, and in one case is labeled as “attentiveness.”

In many bird species (about 80 percent) both sexes give parental care. For instance, Golden-fronted Woodpeckers share nest excavation equally between sexes, with both taking turns to drill the hole, and both help incubate and feed the young. The male woodpeckers spend the night in the nest, helping to keep the eggs and (after hatching) nestlings warm. Males may feed nestlings between 20 to 25 times an hour, stuffing their bills with insects or fruits to feed their hungry offspring.

More uncommonly, the roles of males and females seen in hummingbirds and grackles are reversed, with the male taking the role of primary caregiver. This is a rarer mating system; only in 1 percent of bird species are the males the sole caregivers — as opposed to 8 percent with female-only care. Male-only care is seen in a few shorebirds species, such as Wilson’s Phalaropes. In this case, the male phalaropes are the only parent that incubates the eggs and is then responsible for the brooding of the young.

In recognition of father’s year around, it is interesting to see how birds play the role of parents, and in a spectacular array of ways.

What birds do you typically see outside your window? #JoinTheConversation at facebook.com/rgvisionmagazine.