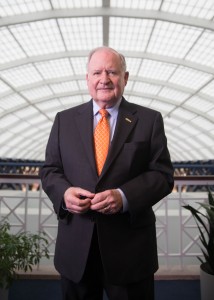 By Joey Gomez
Born “off the pavement” on South Kansas City Road outside of La Feria in a farmhouse, Coats, 70, grew up on the seven mile stretch of farmland between his home and Harlingen. In those days, most communities melded easily with the terrain, and now miles of farmland have given way to burgeoning communities that were once steeped in agriculture, arguably the lifeblood of the region at the time.
Disparate communities however served themselves and created their own identities as a result of long miles separated by a harsh landscape. According to Coats, growing up as the fifth of six children, people in communities across the Valley often became isolated from each other and the rest of the world. When the city limit signs were established, it was clear that communities in the Valley had entered a singular approach to their development, and that concept of regionalism never materialized.
“It occurred to me, having come back to the Valley, that when I was a kid, it was a long way between La Feria and Harlingen,” said Coats, who brandishes an extensive career in aviation.
“It was seven miles, but it was all farmland. There were cities up above Mission that didn’t even exist, Sullivan City and so on, and those that I hadn’t even heard of,” Coats says about the Valley at the time of his upbringing. “The people now, through globalization, the Internet, and our communication system, can be aware of just how much the lower Rio Grande Valley has to offer. It’s not isolated.”
These days, Coats believes the future of the Valley will stretch beyond its mere city limits. In fact, it has already begun.
“I think the leadership is beginning to realize that when you begin to solve problems, they don’t stop at city limits signs. Here, we are beginning to see regional cooperation on medical issues, transportation issues with road systems and the new causeway going in, and that’s going to open up a whole new opportunity for the southern tip of Texas,” Coats said.
“Air quality doesn’t respect city limit signs, water issues don’t respect city limit signs, and we all have to work together as a region, or we won’t be able to solve these issues,” he said.

So What’s the Problem? 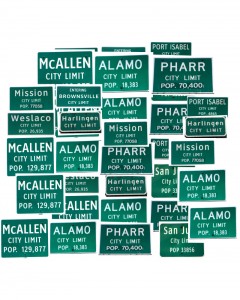 Coats draws a comparison between the current Rio Grande Valley and the Dallas-Fort Worth “Metroplex” in its infancy.
Early on, the two cities did not operate well with each other. Tensions were legendary between leaders in Dallas and in Fort Worth before the creation of DFW Airport. In 1946, Fort Worth hired a firm to prepare an airport plan for the city. The next year, it decided to develop Midway as its major airport and renamed it Greater Fort Worth International Airport, but Dallas continued to develop Love Field.

According to the Texas State Historical Association, in 1948, the CAA National Airport Plan recommended that Greater Fort Worth International Airport be expanded into the major regional airport, but officials in Dallas continued their opposition.
The TSHA states, referencing stories from the Dallas Morning News, that the feud between the two cities became so bitter that then-Fort Worth Mayor Amon Carter refused to eat in Dallas restaurants, and when business made it necessary for him to be in Dallas, he carried a sack lunch.
“The thing that intrigues me is the parallel between Dallas and Forth Worth, when the cities stopped fighting on airport issues and got together,” Coats said.
Coats was a part of those talks in the late 1960s and early 1970s when the cities were forced to work together to offset declining passengers at what was then known as Greater Southwest in Fort Worth, amid the severe congestion at Dallas’ Love Field. The location for the future Dallas–Fort Worth Regional Airport was decided to be at the intersection of the towns of Euless, Irving, and Grapevine.
“When I first went to Dallas, they had an airport, and Fort Worth had an airport, and they were both little regional airports,” he said. “Today, because they finally got together, DFW is the fourth busiest airport in the world, not just in Texas or the U.S., but in the world. It provides over $17 billion in economic benefit to the north Texas region. We don’t talk about just Dallas anymore or just Fort Worth anymore; we talk about the Metroplex.”
Leaders here talk about the advent of a future “Borderplex” if communities can put aside their differences. Similar situations like those that took place early on in the Metroplex have arisen in the Valley in the development of key facilities and programs. Former State Representative Veronica Gonzales recalls one example during her time in the legislature when the region was awarded funds through the now defunct Health Services District, which required Cameron and Hidalgo Counties to work together to come up with a plan to provide care to the indigent population.

The Edinburg leader noted that his hometown, along with the rest of the Valley’s cities, have successfully set aside economic and political rivalries for the greater good of the more than 1.3 million residents in deep South Texas. Garcia is also a former chair of the Texas Border Coalition, a group of mayors and businesspersons from key border cities including the Valley, Laredo, Eagle Pass, and El Paso, who have come together on issues affecting the border area.

“We are prepared as a region to work together in support of a medical school for South Texas. We are working hard and looking forward to acquiring a medical school that will help the Rio Grande Valley continue to grow while allowing us to meet the needs of every resident,” Garcia said.

Sam Coats believes the concept of one regional MSA is the future of the region.
“I think it’s the future. I think by not doing that, it’s a limitation. It’s almost like we have a potential asset that we are afraid to capitalize on because we are too tribal,” he said. “That needs to go away. When it comes to football or basketball or tennis, that’s fine, but when it comes to the Valley, it should be one entity. It’s a dynamic entity. We should promote it on a regional basis, because everybody has something to gain from that.”