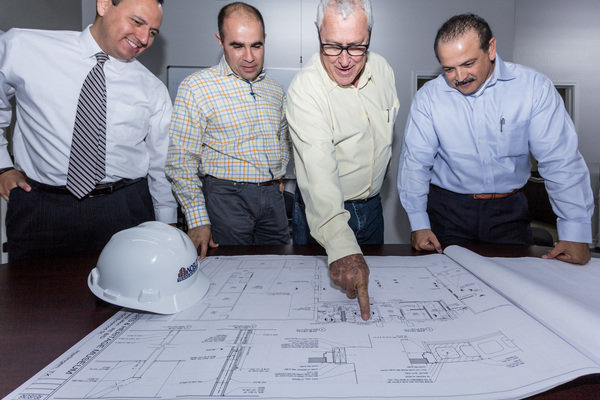 Taking a development from a concept to brick and mortar and beyond is the idea behind a pair of companies poised to stake a claim in the Rio Grande Valley’s expanding economy.

A group of partners with extensive experience in construction and economic development embarked on an ambitious venture with the formation of Noble Texas Builders in February 2015, and more recently NTB Development (Noble Texas Builders – Development), two companies that work hand-in-hand to identify opportunities and guide their clients through the process of bringing a project to fruition.

Rene Capistran, president of Noble Texas Builders, and some of the other partners worked for SpawGlass, a Texas-based general contractor, and wanted to pool their knowledge to create what Capistran refers to as a “cradle to grave” process.

“It is the sum of all our parts that makes us unique,” said Capistran, who previously was president of the SpawGlass South Texas Division. “We build and maintain for the long term. We will be there for anything from changing light bulbs to building an addition.”

Other partners who met recently for this article are Pat Williams, former president of the SpawGlass Austin Division; Alfredo Garcia, former SpawGlass Building Services Manager; and Ramiro Garza, former Edinburg city manager. In their new roles with NTB Development, Williams is vice president and Garcia serves as Director of Operations. Garza has come on board as president.

Noble Texas Builders is the contractor, Capistran said, while NTB Development handles the up-front economic studies and development process. “The game-changer in what we’re doing is we identify people and we help them with the whole process,” Capistran said. “If someone is contemplating a project, we want to help walk him through the process, help him decide when to do what.”

Under Garza’s leadership, NTB Development identifies projects and developers and works with them to solidify the concept, conduct economic impact studies and research financing options, including tax abatements and other financial incentives that may be available.

“Ramiro comes in and does the economic impact,” Capistran said, noting Garza’s experience as Edinburg city manager where he worked on economic development and negotiated with private companies to locate in that community.

“We have assessed needs around the Valley,” Garza said. “We’re always looking for performance under the umbrella of what we do, advising on the best use of property, financing, building and maintenance.”

Once the groundwork is complete and the project gets a green light, NTB Development steps in to handle the actual design and building phases, as well as provide maintenance for the facility once construction is complete.

“We help landowners make informed decisions,” said Williams. “We help them separate fact from fantasy and work through the entire development process with no false starts.”

As an example, Garza discussed an apartment complex development in Port Isabel, where a landowner wanted to transform his vacant property into a revenue-generating development but wasn’t sure about how to best use his land.

“There is a big need for housing in Port Isabel and South Padre Island, and it can be very expensive to develop,” Garza said. “We’re doing all the due diligence on the front end … advising on the best use of property, financing, building and maintenance.”

Garza said the initial economic research has been done and the landowner is ready to move on to next steps such as rezoning and financing.

As the project is ready to break ground, the other Noble Texas partners will build on Garza’s expertise to shepherd the project through the construction and maintenance stages. “We offer a good foundation because of everyone’s experience,” Garza said. “A lot of years in multiple disciplines, that’s what we bring to the table.”

The NTB group is exploring many other aspects of the Valley economy for opportunities, including the medical and educational fields. “We’re doing a lot of medical work, hospital updates, expansions and renovations. We want to be at the front end of that,” Capistran said. Furthermore, Noble’s interest in education goes beyond pursuing development projects to include reaching out to schools to generate interest among students in what they do. “We go into schools and talk to the kids about careers in construction, engineering, architecture. It’s a mutual gain,” Capistran said. Williams added that they want to change the image of construction among young people by exposing them to the multitude of career opportunities available. “It wasn’t that long ago that when a kid said they wanted to go into construction, some adult would tell them, ‘Is that the best you can do?’ We want to change that.”

Before the partners took the plunge into their new venture, they did their homework about the Valley economy and expressed enthusiasm for the future.

Citing examples like the expansion of higher education with the new University of Texas-Rio Grande Valley, SpaceX’s plans to build a rocket launch facility near Boca Chica Beach, the proposed liquefied natural gas plants at the Port of Brownsville, the Noble Texas partners see a wealth of opportunity in Deep South Texas. With some 10 million people within a 150-radius, said Williams, it is an international market that straddles the Rio Grande in northern Mexico and South Texas. “We’re bullish on the Valley’s positive trends,” he said. “The once little-known Rio Grande Valley is now being understood in the wider market.”