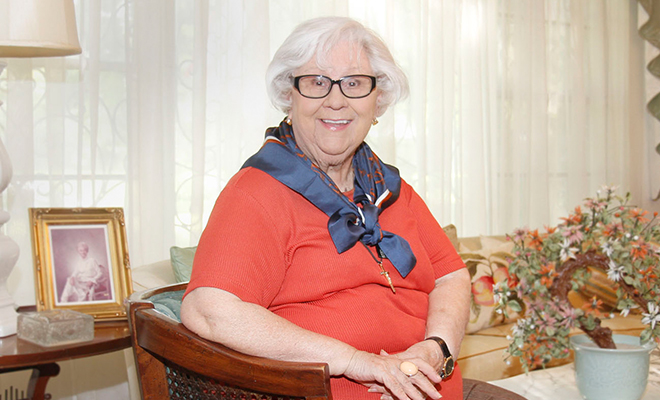 Renowned philanthropist Lita Ortiz talks about the value of education, and its role in shaping communities

Lita Torres Ortiz remembers what a thrill it was to have 25 cents in her pocket on a Saturday morning.  She and her friends would spend nine cents on a movie at Brownsville’s Majestic Theater on Elizabeth Street; they would buy popcorn for five cents and a Hersey bar for five cents.  After the movie, they would go across the street to Kress, where each could spend their remaining six cents on whatever caught their fancy.

“It was during the Depression, but we were in heaven,” Ortiz recalls.

Ortiz also remembers when there was little emphasis for girls to continue their educations.  The granddaughter of Spanish immigrants who came to the Rio Grande Valley seeking greater opportunity and land they could call their own, Ortiz was expected to watch the men her age go forth to pursue professional careers – not a necessary expense for a young lady from a traditional family.  However, Ortiz possessed the adventurous spirit of her Spanish grandparents, as did her mother, who had attended a local business school and worked in the Cameron County Tax Assessors Office.  With her mother’s moral and financial support, Ortiz set off for Stephens College, a school for young ladies, in Columbia, Missouri.

“My mother, Consuelo Torres Ortiz, who lived to be 98, was a remarkable woman and a wonderful role model,” Ortiz said.  “She instilled in me the value of education, for men and for women, and the role it plays in developing not only the person but also the community.”

“My mother would leave for the hospital early every morning to arrange for photos of the babies that had been born in the past 24 hours,” she said.  “The modest charge for the baby pictures not only helped fund the scholarships but also was a service to the new moms and dads.”

Ortiz has followed her mother’s example, and over the years, she has served her Brownsville community in numerous ways, among them by sitting on the boards of Saint Joseph Academy, Board of the Guadalupe Regional Middle School, Historic Brownsville Museum, Pan American Round Table, Esperanza Home for Boys, and the Camille Playhouse.  She has been a volunteer at Gladys Porter Zoo, and this past year, she was chair of the Centennial Celebration of Sacred Heart Catholic Church.  After her retirement from the Texas Department of Human Services, she spent three or four days weekly as a volunteer in the church office of Immaculate Conception Cathedral.

Professionally, Ortiz broke a glass ceiling by becoming the first female regional director of the Texas Department of Human Services.  She started her career as a medical technologist at Mercy Hospital after receiving her bachelor’s degree in chemistry and bacteriology from Our Lady of the Lake University.

She said she saw a need in the area of social work and began working for Child Protective Services.  That led to returning to Our Lady of the Lake to the Worden School of Social Service, where she earned her Master of Social Work, which led to becoming a supervisor and then a staff development specialist, followed by becoming Regional Director of the Texas Department of Human Services.

“I remember our first meeting, when one of the men asked me if I would make the coffee and take the minutes of the meeting,” Ortiz said.  “I said, ‘Sure,’ and then at the next meeting, I told him it was his turn.  Well, things have changed a lot, but what hasn’t changed is the importance for everyone, both men and women, to achieve their potential through education.”

One way Ortiz hopes to help in that regard is by creating a planned gift to The University of Texas at Brownsville.  With this bequest, she has joined other planned givers who make up the Legacy Society.

“Just as my mother taught me, we can’t always take but must also give,” Ortiz said.  “I am just happy that I am able to do something to help future students.”

Serena Putegnat, UTB University Relations Officer, said people often think of a gift to higher education as writing a check or giving away a piece of property, like real estate or securities.  However, that is not necessarily the case.

“With planned giving, the decision to give is made now, but the gift does not flow to the university until sometime in the future,” Putegnat said.  “This can include a simple bequest in a will, such as Lita has done.”

Putegnat explained another manner of giving called “life income gifts,” such as charitable gift annuities and charitable remainder unitrusts.  Life income gifts such as these enable the donor to make a gift at any time, but to retain the benefit of the gift property – the income from it – as long as they live.

“What works for one person may not be the best approach for another,” Putegnat said.  “No matter how someone may give, it is appreciated.  Our students rely heavily on scholarships; we must keep in mind even if a student qualifies for federal financial aid – and not all of them do – that alone does not cover everything.  UTB is here to change lives, and with the support of donors such as Lita, our students are one step closer to attaining meaningful and productive careers.”

For information on planned giving to UTB, contact Serena Putegnat in the Office of University Relations at 956-882-4326 or serena.putegnat@utb.edu