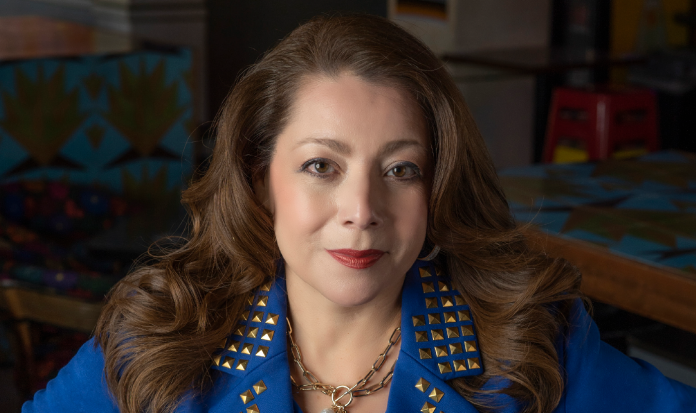 Adelante y con ganas. That’s how Dr. Virginia Champion has for years signed off on her emails and letters as a form of inspiration, encouraging others to put their best foot forward and give it their everything.

After all, that’s how Champion has lived her own life. She started working at the age of 14, and at the age of 17, she decided that she was going to do better. She didn’t want to struggle and decided to be the first in her family to attend college. She had no guidance, but she made it work. She pushed forward. In her words, she “buckled down and just did it.”

That wouldn’t be the last time that Champion would buckle down and figure it out. Through the course of her more than 25 years in education and academics, Champion, who holds her doctorate in educational leadership, has impacted thousands of educators and students across the Rio Grande Valley. Champion worked many years for Region One ESC and as an educator in school districts across the Valley. She now works for South Texas College as executive director for Resource Development, Management, and Compliance.

“My work at South Texas College is immensely gratifying because it involves connecting college programs and services to funding opportunities that benefit students, the college, and the communities we serve,” she said. “Being able to make a difference on other people’s lives in the Rio Grande Valley has always been important to me.”

As she speaks about the work she does, there is passion behind every word — a genuine love for education — but her face lights up when she speaks about her second love, one that she’s been nurturing all her life.

“Music is so meaningful to me, not that education isn’t, because education has given me the opportunity to make a difference, but this is different,” Champion said. “This is a different type of excitement, and it’s so personal, it’s fun, and I love it.”

Virginia is known in the Tejano and Latin music industry as the lead singer for Virginia y Valor, a Tejano Conjunto band. 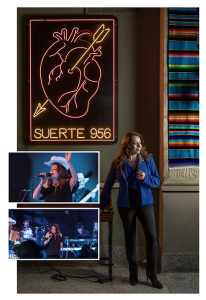 “I have always had a passion for music, and when I decided to make the leap, I said, ‘You know what, it doesn’t matter what people are going to think,’” Champion said. “‘If I didn’t do this now, I would regret it.’”

In 2019 and on the heels of a global pandemic, Champion decided to once again, take a leap of faith and place total trust in herself. Though it intimidated her, she put herself out there.

Since then, she has recorded two albums, “Amor Mio” and “Adelante.” The second album pays homage to her signature phrase.

“All of the music from our ‘Adelante’ album was produced, arranged, mixed, and mastered by Grammy nominee, Severo “Sevy” Contreras at Slackmonster Studio,” Champion said. “This project involved various studio musicians, guest artists like Shelly Lares, ‘Little Miss Dynamite,’ Toby Beau, and musicians in our group.”

A natural on stage and singing, it’s hard to believe that prior to this success, Champion had never recorded, performed, or had a band. The drive she possesses has allowed her to maintain both her academic job and make time in the evenings to rehearse alone or with her band. And the weekends? Well, that’s when Virginia y Valor bring the music to life.

“Our energy-packed performances on the weekends are truly an exhilarating and powerful way to re-energize for the following Monday, when I get to do a completely different type of work,” Champion said.

Virginia y Valor continue to grow, and as she commented, the music industry is like any other industry: There are people who will offer you a helping hand and guidance, and there will also be some who don’t.

The band came together little by little with some help from people like Rodolfo Marcelo Garza, known in the music industry as Rudy Garza Jr. Garza started as her keyboardist and now runs sound for Virginia y Valor. Garza is no stranger to the Tejano industry, having performed and composed songs for Alma Pulido, Bobby Pulido, and La Preferencia. In the 1980s, he also performed with Cali Carranza at the Tejano Roots Hall of Fame Awards Ceremony.

It’s easy to say that Garza knew his way around the industry, and like many people, he saw something special in Champion.

“I was intrigued by her voice,” he said. “She has that ‘it’ factor when it comes to singing. Her voice is like a magnet — it attracts people, promoters, and DJs.”

That talent inspired Garza to want to work with Champion.

“I’ve played with many other major musicians, and my first professional band was another female, Alma Pulido,” he said. “In this industry it’s hard for women to become successful. I saw something in Virginia and wanted to help her succeed. I believe in her voice, and I believe in her.”

The group is now receiving opportunities to perform more as pandemic restrictions begin to ease and more venues open for performances. Virginia y Valor perform locally and are preparing for bigger performances throughout the state and nation.

In January, Champion received a call from the president of the Tejano Roots Hall of Fame Induction Ceremony, who personally invited Virginia y Valor to perform during the awards ceremony. He asked if her band would be able to make the quick transitions between sets. Confident in her musicians and their talents, Champion agreed.

The band played for 20 minutes during the induction ceremony before pioneers in the industry.

While her two worlds of academics and music don’t collide, Champion has taken her years of experience in education and used it to run her music business.

“Initially, I was partitioning everything out, and in that first year, I realized there were a lot of skills I could transfer in the music industry,” she said.

Sure, she had never performed before an audience, but she had spoken at many conferences in front of hundreds of people. She also pulled business skills from her professional career and established Virginia y Valor as an official business.

“There is this whole business side of it from getting an album produced, working with people to make physical copies of the album to distribute, to putting music out on the radio and promoting,” Champion said.

Virginia y Valor is also now represented by Troy Castillo of TMC Entertainment. Castillo has been in the music industry for more than 35 years and has a knack for spotting talent.

“She caught my ear the first time I listened to her sing, but I also wanted to see how she did on stage,” he said about first discovering Champion. “I liked what I saw. She’s like a hidden gem.”

The reception to Champion’s music has been warm.

“She is known now in the Valley area, but I am trying to get her more exposure throughout the state,” Castillo said. “Everything takes time, but for sure, I want to have her (performing) out of state.”

Champion’s voice has resonated through her many years in education. It has inspired and guided many educators and students alike. Her voice now carries differently, inspiring and impacting scorned lovers and hopeless romantics, who sing and dance to her music.

Champion has proved that while we do have one life to live, we can also reinvent ourselves and live many lives in the one we are given.

“Sometimes I pinch myself and think, ‘Is this really happening?’ The whole experience has been like a high, like, wow!” Champion said. “I hope to inspire someone who is thinking whether they should try something different or who want to tap into other interests.”