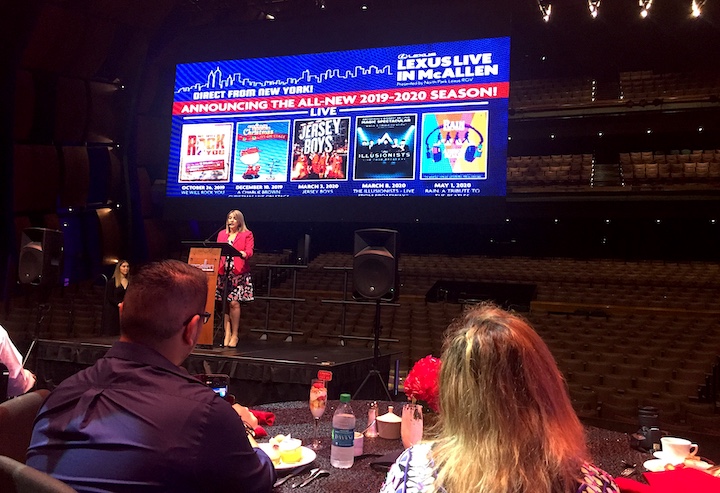 The McAllen Performing Arts Center has some big moments planned for the next five hundred twenty-five thousand six hundred minutes.

Broadway classics RENT, CATS, and the Blue Man Group are among the performances Rio Grande Valley residents can look forward to during this year’s season.

The shows are a testament to the performing arts center’s impact in the community — and its lasting impression on visitors.

When they came to play at the end of March at the performing arts center, one of the Beach Boys asked Yajaira Flores, “Have you seen this place? It’s the best theater I’ve been to — it’s gorgeous,” she remembered. Of course, as the director of the McAllen Convention Center Facilities, Flores had seen it — and was happy to give him a tour.

McAllen city officials, Valley performing arts leaders, and members of the media gathered onstage at the performing arts center for breakfast and the announcement of the 2019-20 season’s shows.

The 2019-20 season announcement came amid National Travel and Tourism Week, Flores said. She added that 15,343 tickets for performances at the center were purchased from outside the Valley — people traveling to McAllen to see the shows.

“You see what’s happening all around us in terms of Palms Crossing with the retail and the hotels,” said Steve Ahlenius, CEO and president of the McAllen Chamber of Commerce. “Tourism is a huge economic driver.”

He added that residents in communities like McAllen pay an average of $1,000 less in property taxes because of tourism revenue.

The performing arts center, which was completed in 2016, hosts performances throughout the year from five series: the Valley Symphony Orchestra, McAllen Community Concerts, the McAllen Wind Ensemble, Broadway in McAllen, and Live in McAllen.

For more information on the 2019-20 season and for tickets, go to liveinmcallen.com.