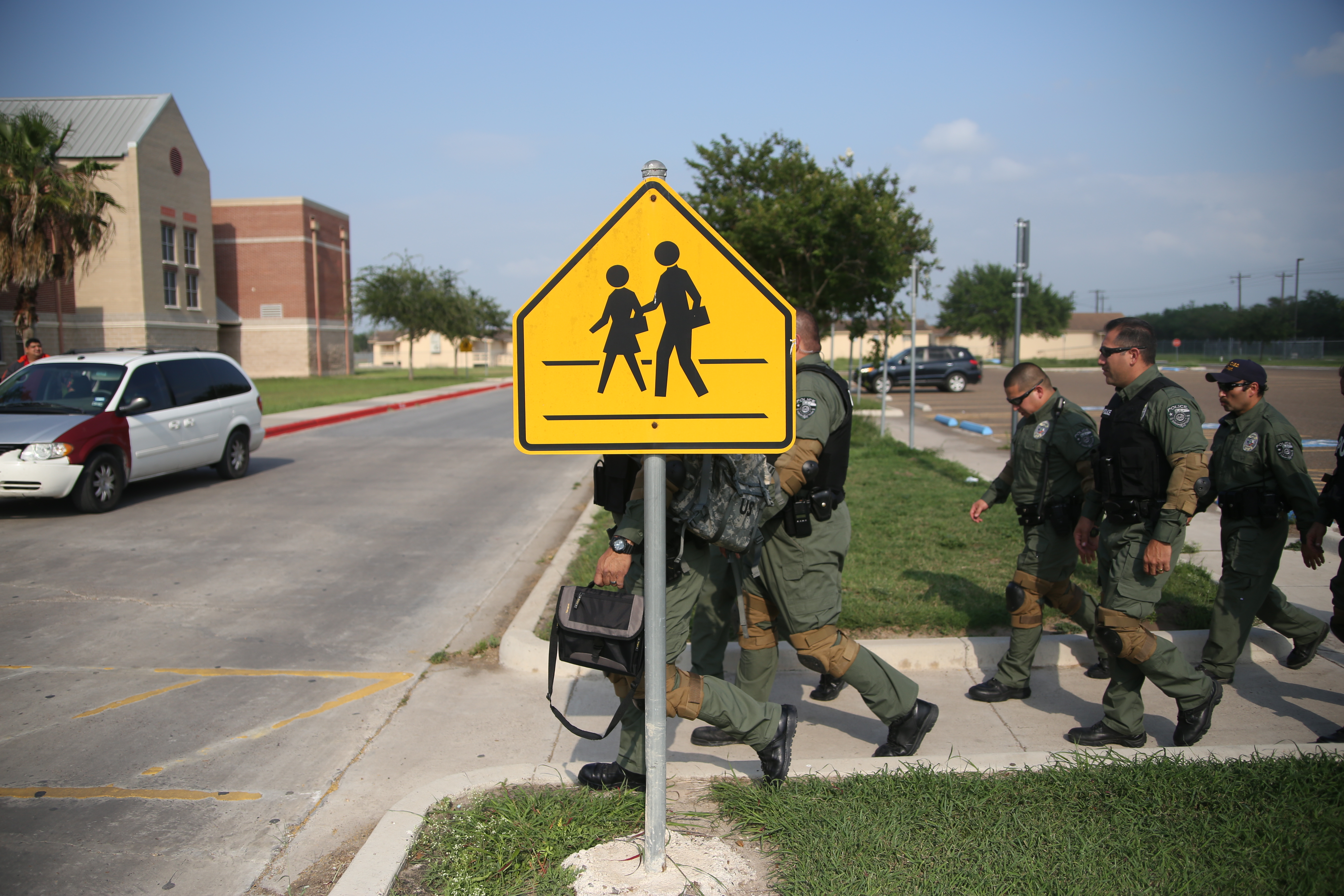 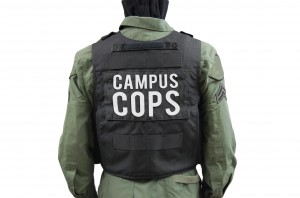 The plan is simple.  If there was an active shooter at an Edinburg school, the campus SWAT officer would change into their gear and assemble a team of the other school police officers.  The SWAT officer would form a plan to get the shooter out without harming any of the bystanders, hopefully.

They might call for backup from the other Edinburg Consolidated Independent School District SWAT officers, or they might just go in after the shooter themselves.  They would move rapidly, grouping up, or “stacking up,” intermittently with their Sig Sauer 40 caliber handguns drawn.  The other officers would cover while the SWAT officer makes an entry.  The first thing now is to protect any hostages.  Secondly: neutralize the shooter.

After the Sandy Hook Elementary shooting in December, the news in January that an armed survivalist entered a stopped Alabama school bus, shot the driver, and took a 5-year-old boy hostage didn’t sit well with Ricardo Perez, Jr.

Perez, who was trained and certified as a Special Weapons and Tactics officer in 2001, brought the idea to Superintendent Rene Gutierrez, who put it on the school board’s agenda for the next meeting.

“We want to take a proactive approach to safety and security for all students,” Perez said.  “It’s just like a hurricane.  You don’t know if it’s going to hit or not, but you want to have the components in place.”

The proposal was to allow the officers that ECISD already employs to receive extra training on how to handle a situation like a school shooting or bus invasion.  One SWAT-trained officer would be placed at each of the district’s 43 campuses.

“Everything is tactfully done, step-by-step.  They would identify the situation and weapons involved and make a plan to try to resolve the issue,” Perez said.  “The uniforms are already in the budget, and we get the equipment from army surplus, so there’s no extra cost to the department.” 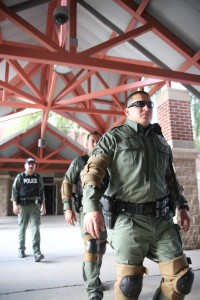 When it was proposed to the school board, board member Carmen Gonzalez said the discussion centered on making sure the district was not overreacting.

“We didn’t want it interpreted that we have a problem in the district,” said Gonzalez, who is serving her third term on the board.  “The reception of the idea seemed well-received, and I did not hear anything negative.  We mainly asked for details about how it would operate.”

The board approved Perez’s proposal, and he put out the call for volunteer officers to start training.  Those 48 officers interested in joining one of the very few school SWAT teams in the state had to run a mile and a half in under 13 minutes, do 50 pushups and 50 sit ups in a minute, and pass a background check.  Other Texas school SWAT teams include Humble ISD and Willis ISD north of Houston.  Besides the Texas SWATs, California also has two – one for the Los Angeles School District and one for the Woodland School District, near Sacramento.

The business of school security has changed drastically since Eric Harris and Dylan Klebold entered their high school and killed thirteen people and then themselves in 1999.  Perez, who graduated from Edinburg High School in 1981, said he sees a sharp contrast between pre-Columbine times and the present.

“In my high school, there was one security guard,” he said. “Active shooters on campus were just not heard of, and it wasn’t until Columbine in the 90s that the security of school campuses changed.  Now you’ve got students on the Internet learning how to build bombs and playing video games on shooting.”

Gonzalez agreed, remembering her time as an administrator with the district 25 years ago.

“We had what we thought was an appropriately sized police force – about five individuals, I think,” Gonzalez said.  “But we’ve grown as a community, and we’ve grown as a school district.  The situations in the world have changed, and security is now an issue in public education.  We may not like it, but we need to be ready for it.”

The more recent Sandy Hook Elementary shooting in Newtown, Connecticut, is what really fueled Perez to create the SWAT team, he said.

On December 14, 20-year-old Adam Lanza killed his mother before driving to the elementary school and shooting in the glass doors.  He then killed six adults and 20 first grade children.

“It even brought a tear to President Obama,” Perez said about the Sandy Hook shootings.  “I have sons in school, and a nephew, and I want to be prepared for any threats that may occur on campus to keep students safe.”

Perez was further spurred to propose beefed up security because of Edinburg’s proximity to the border and the increased possibility of spillover violence from the Mexican Drug War or immigration issues, he said.

“For example, (Department of Public Safety) sometimes are in pursuit over on Ware Road or Monte Cristo Road, and sometimes there are bailouts – a bailout is when they stop the chase and the suspect gets out and runs – and we have to lock down the campus,” he said.

Elizabeth Valdez, who has a son going to an ECISD high school, agreed with Perez’s assessment.

“Violence across the border is getting worse by the minute, and they say there’s no spillover, but there is,” said Valdez, who served for three years on the ECISD Superintendent’s Circle of parents.  “It’s so sad with this massacre at Sandy Hook, and you hear that schools are beefing up security, but it’s sad that it took this to be creative.” 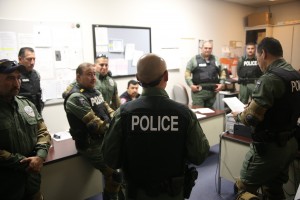 Compounding the problem of school security is the spread of ECISD, with 43 campus spread over 945 square miles, there’s a lot of ground for the officers to cover.

“I mean, it’s equivalent to a mid-sized city,” Perez said.

Edinburg resident Julie Wells remembers attending Jefferson Elementary when there was not a gate around the outdoor classrooms, and the doors were left open due to the lack of air conditioning.

“Now they have it secured, there’s a gate all around, and it’s locked.  Definitely more secure than when I went, and I’m 45 years old,” said Wells, who works as a school secretary in Hargill.

At first, Wells said, she was doubtful about the SWAT initiative, thinking it might be overkill.  But the news and the distance changed her mind.

“I work all the way out in Hargill, 22 miles north of town.  I’m sure a SWAT team could respond out there in the country if something happened,” said the mother of two.  “And you know I stopped to think, every morning I drop off my kids at school and I tell them, ‘I love you.’  What if that was the last time I said those words?…Those events happening helped change my mind.”

While Wells agrees with the school district’s SWAT initiative, she also said she felt her children were safe before, and wasn’t sure about spillover violence in the Valley.

“I believe the SWAT team would be enough,” she said.  “I’ve never seen a major catastrophe, like a major thing happen.  I’ve never felt (spillover violence), never felt that.  If I lived in Hidalgo or Progreso, then maybe.”

Nora Juarez, who teaches 5th grade in the La Feria Independent School District, said she understands having a SWAT team to respond to emergencies, but isn’t sure about putting an officer on every single campus.

“I’m indifferent; I mean, nothing has occurred like that here, so to spend on something like (the SWAT team) for kids in elementary school  – now high school, maybe, it would depend on what is going on there,” she said.  “But for the lower levels, I don’t think it’s necessary.”

What happens in Edinburg affects Juarez’s job in La Feria, because if ECISD uses the proximity to the border and recent events to justify a no-cost-for-now SWAT team, other Valley school districts might soon follow suit.

“If it is working for them, then (La Feria) is going to start looking at what they are doing and maybe pick it up too,” Juarez said.

Besides whether other Valley schools want a SWAT team, ECISD must ask itself where theirs should stop.  While it seems the ECISD community generally agrees with the SWAT initiative, some want the team with more resources and others see it fine in its current state.

Currently, the ECISD school board has asked all departments, including the police, to come up with a budget for the next academic year, according to Gonzalez.

Perez is hoping to get those M4s for the team.  Valdez agrees, she isn’t sure the current SWAT team goes far enough in terms of school safety.

“You know it’s like if you can’t beat them, then we need to get smarter and protect ourselves and our kids,” she said.

Wells, too, would be all for expanding the budget for the SWAT team, she said.

“I work with the budget at (Hargill), and I see where they could cut back on other departments to make safer for children – for my kids,” she said, adding that she would like to see all-terrain vehicles purchased.

Gonzalez said that besides the SWAT initiative, the school board is also considering a more sophisticated system for identifying visitors to school grounds, which would include scanning a picture ID and running it against a centralized database before printing a school ID.

As far as school safety in general, Gonzalez said she doesn’t see an endpoint in sight any time soon.

“These are some things that we are trying for the first time, and they may be out of our comfort zone,” she said.  “But the safety policies of the campuses are guided by feedback from principals, parents, and teachers.”