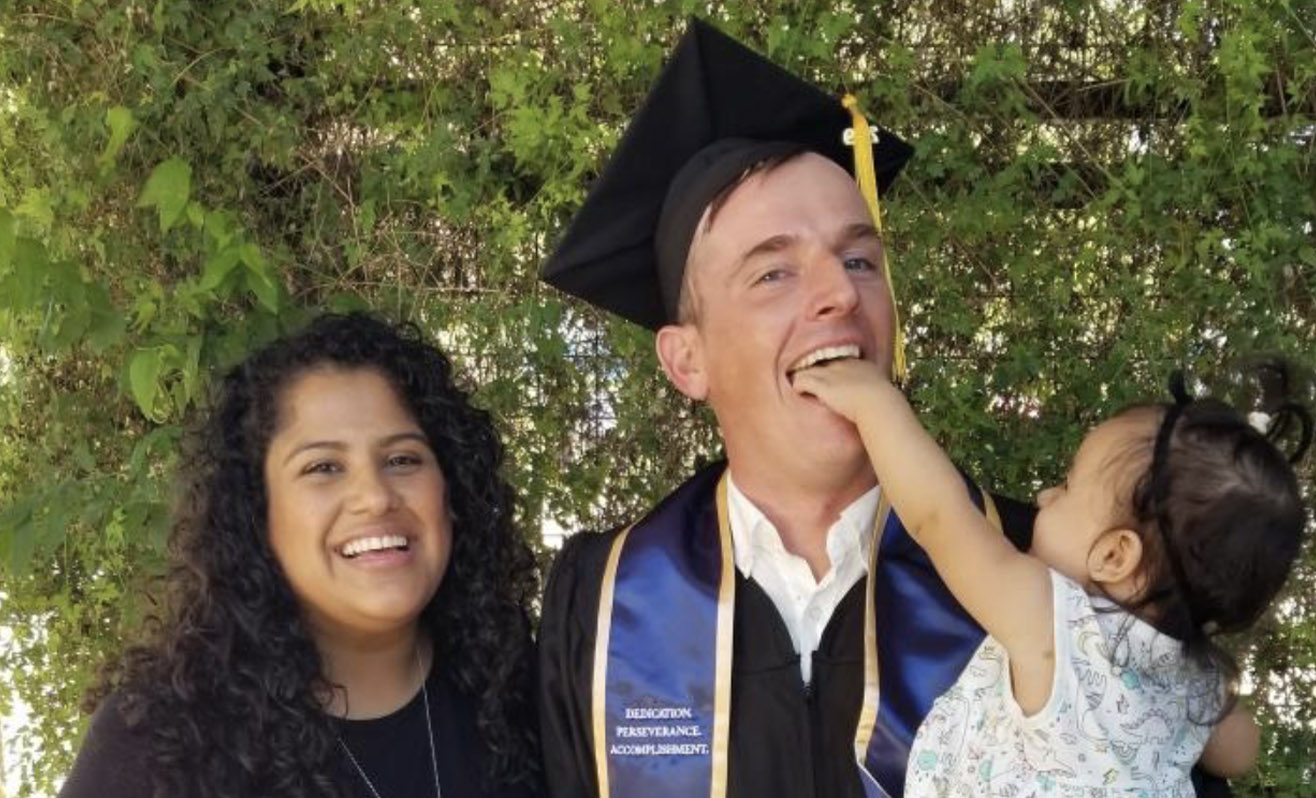 Jordan Roney moved the Rio Grande Valley, bought a house, started a new career in a new city, became a first-time parent, and went back to school through IDEA-U — all at the same time.

“Yes, it was super hard,” he said. “I did my associate all last year and now I’m doing my bachelor’s.”

In spite of leaning in to all those big life changes at the same time, Roney found success at IDEA-U.

“I was still able to make it happen and I feel like that speaks volumes to just the way that it’s set up,” he said. “I don’t see any other way I would have been able to achieve that without being enrolled in IDEA-U. I’ve been very, very grateful.”

Roney, 35, lives in Weslaco and works in San Benito for IDEA Public Schools’ farm program. Right now, he is pursuing his bachelor’s degree in management with focus in logistics and operations at IDEA-U. Though he would like to push himself and be done by August, when he and his wife are expecting their second daughter, Roney may earn his degree at the end of this year or the beginning of next year.

“That degree could help me within the farm program,” he said. “That would be a really good segue into a position of that caliber where I’m overseeing and managing different employees at different schools, different farms.”

The ability to work at your own pace online is an IDEA-U feature that is attractive to many students, as is the straightforward application process.

“I applied and that’s when I interviewed with one of the academic advisors,” Roney recalled. “After sitting down with them and hearing about how IDEA-U is structured, I was like, ‘yeah, this is a lot more realistic for me.’

“It was pretty seamless — there was an essay involved, writing about why I was interested in pursuing my degree with IDEA-U, why I thought IDEA-U kind of catered toward me and where I was at in my life at that time.”

To get him up to speed on his academics, Roney underwent academic onboarding, a process all new IDEA-U students take part in before starting their official studies.

“I did go through academic onboarding, which was very rigorous,” he said. “There was a lot of math involved — just reintroducing yourself to all these different subjects, there were definitely pretty difficult moments.”

He persisted, even through nerves at how dedicated he would be to the online learning model. Roney had unsuccessfully attempted to go to college before.

“I thought I knew myself in regard to being able to prioritize my time and not procrastinate — that honestly was a little bit of a concern for me,” Roney said. “But at the same time, I knew that because I was starting this new job, new kid, if I was going to realistically go back to school, this is the only way that it’s going to work.

“Once I started it, I was pretty shocked at how I was able to adapt to it. I surprised myself. I assumed I wasn’t going to be good at the online format, but looking back on it, it’s worked out so well for me.”

Part of that success came from the guidance of his IDEA-U advisor.

“That’s another thing that’s been really cool — just the access that you have to your academic advisor and how there’s someone that’s always keeping you held accountable,” he said.

As his wife gears up to earn her bachelor’s degree through IDEA-U, Roney “so wholeheartedly” recommends the online university to others — particularly if they are as busy as his family is.

“It’s been such a blessing on so many levels,” he said. “There’s no other way I would be able to do this. The format of it is a lot more conducive for the amount of control that you’re given. It’s much more motivating and much more encouraging.”

Would you be willing to try out online-only learning to go back to school? #JoinTheConversation at facebook.com/rgvisionmagazine.