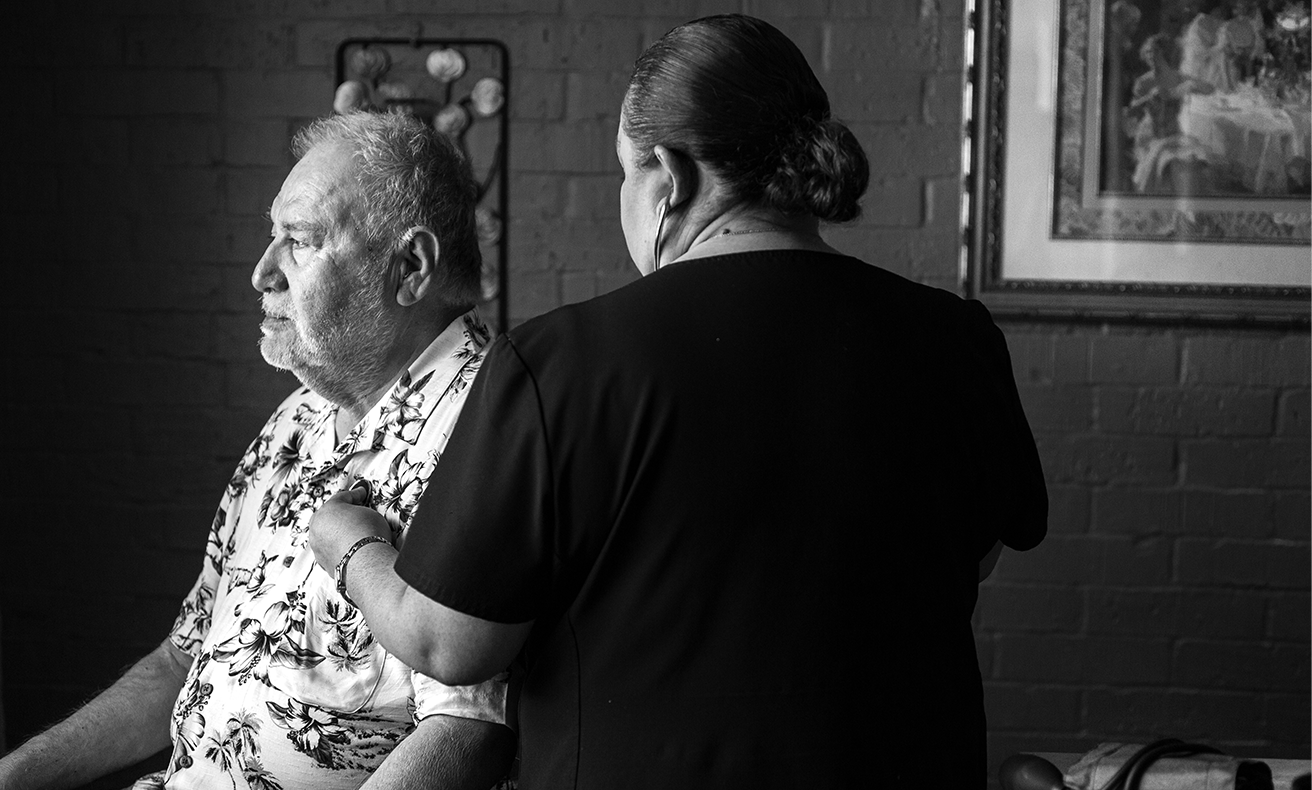 The toll hit hard for Julieta Corpus’s father following his diabetes diagnosis in 2008.

The disease led to an infection in his right leg, which then had to be amputated to keep the infection from spreading.

As the only sibling with a part-time job, Corpus settled into the role of caregiver for her father, but that responsibility, she found, came with its own psychological burden.

Her father does have a provider, who is with him from 8 a.m. to 1 p.m. Corpus assists in his care, which mainly consists of being there for him in case he needs something, such as getting him water, preparing meals, staying on top of any changes to his medications, and being on the phone with his doctors or nurses, as needed.

After his leg was amputated in February, her father spent time in rehab until the end of March. Since then, he’s had to readjust to life without his right leg.

“And since he’s very stubborn. Many times, he has tried to go to the bathroom by himself, for example, and so he falls,” Corpus said. In those instances, she’d solicited the help of her brother to help lift their father back up.

But the burden of looking after her father is hardly physical, she said. More than anything, the stress is psychological.

“My dad was always a strong man,” Corpus said. “He worked in construction all his life and to see the deterioration of his body … is very difficult to witness.”

Knowing that she was hardly the only person experiencing this situation, Corpus launched a support group about three months ago.

The group, Sons and Daughters with Aging Parents Support Group, meets every second Sunday of the month at a McAllen coffee shop.

“We just talked,” she said. “They just started talking because they needed somebody to talk to and, at the time, I needed that as well and I continue to need that. For me, it’s always better to speak to someone outside of the family.”

Soon after, an acquaintance who worked at the Dustin Michael Sekula Memorial Library in Edinburg approached her about possibly hosting a presentation ever so often at the library for the support group.

“And of course I said yes,” Corpus said.

Their first presenter provided those in attendance with information on Medicare and Medicaid and resources available to them.

Resources available to the caregivers vary widely, but include tips on how to care for their loved one to information about their legal rights.

Under the Family and Medical Leave Act (FMLA), a caregiver is allowed up to 12 weeks of unpaid time off in a one-year period to care for a parent, child, or spouse who has a serious illness.

There are also prescription assistance programs that can help pay for medication, such as the Partnership for Prescription Assistance and Together Rx Access.

For those caring for a family member who developed a severe disability before the age of 26, they could be eligible for an non-taxable savings account and still receive disability benefits under the Achieving a Better Life Experience (ABLE) Act.

The Department of Veterans Affairs also offers its own set of resources for those caring for a veteran. More information on those services is available through the VA’s Caregiver Support Line: (855) 260-3274.

Information is available through the local caregiver support coordinator at the VA Health Care Center at Harlingen.

But the group is a resource in and of itself for Corpus, who reiterated how helpful it is to know that there are people she can reach out to when she needs to talk.

“I feel a little better,” she said. “Again, I knew that there were a lot of other people in the same situation, or worse situations.”

“For them, knowing that they’re not alone and they have somebody to talk to is also a huge relief,” Corpus said, “and that’s exactly the way I feel.”