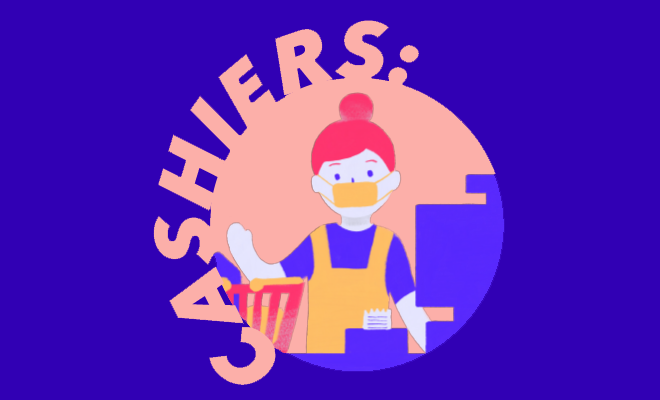 Medical professionals have been on the frontlines since the beginning of the COVID-19 pandemic, but who are among the unsung heroes amongst the masses? Cashiers.

Cashiers have played a huge role throughout the pandemic. It is a difficult task to ask a person to risk their life while also providing top-tier customer service, but that has been the reality for local cashiers like Giselle Reyes, Andrea Salinas, and Daisy Escobar.

Giselle Reyes, a grocery store cashier, has been in that profession for over three years. After local shelter-at-home ordinances were announced in April, she remained resilient and continued her job. Immediately, the safety of her family became her primary concern.

“Obviously, it’s easy to worry or fear getting sick, but our family takes the necessary precautions

to avoid contracting the virus. Luckily, these precautions have been working for us,” Reyes said.

After working as a retail cashier for over a year-and-a-half, Daisy Escobar had a similar reaction to the pandemic. Suddenly, she had to alter the way she interacted with her family.

“At one point, I was not allowed to be in direct contact with my 4-year-old brother. I did not want to get him sick — it’s better to be safe than sorry,” Escobar said.

Not only did these local cashiers have to adapt to protect their family, but they also had to maintain their composure when it came to handling frustrated customers, as many were upset about new protocols and limitations.

“At the beginning of the pandemic, customers were really upset due to product limits. They took their anger out on cashiers,” said Andrea Salinas, a grocery store cashier of two years.

“I have been put in multiple situations where I have felt overwhelmed or undervalued.”

As time passed, new safety measures and protocols were established in their various workspaces. Tensions decreased, and although it felt more “normal,” cashiers now had to deal with managing a change in the hours they were working per week.

Layoffs became common due to the many store closures, but for grocery store cashiers Salinas and Reyes, they were able to maintain their position. Initially, their hours were cut due to the capacity limits, but now they say that their hours have increased greatly.

For retail cashier Escobar, she was forced to cover coworkers who were out due to COVID-19. Her hours nearly tripled on several occasions.

Despite all of the chaos, the three cashiers remain positive and optimistic. Salinas knows that cashiers need support now more than ever.

“To all the cashiers, remember to breathe! As silly as this sounds this will only make us stronger.

Take the bad and turn it into an experience. It can serve as a learning lesson on how you could handle your situation the next time around,” Salinas said.

Have you thanked a cashier for their hard work during these challenging times? #JoinTheConversation at facebook.com/rgvisionmagazine.