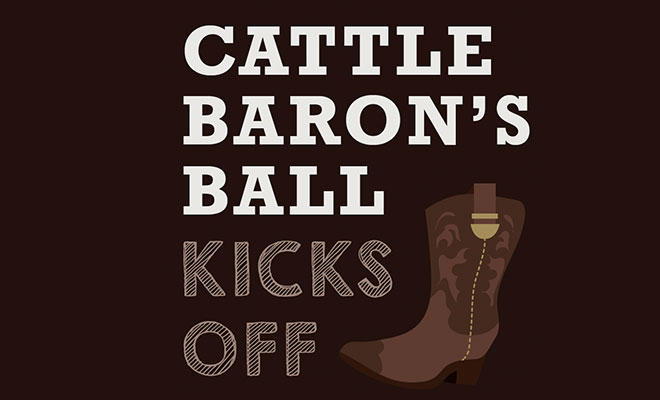 Retired News Anchor to Be This Year’s Honoree

“They’ve really gotten into the spirit of not only hosting this beautiful event at their wonderful facility but also modeling,” said Susan Rodriguez, senior manager of community development at the American Cancer Society.

The fashion show was the highlight of the evening during May 10’s kick-off event at Texas Regional Bank in McAllen for the annual Cattle Baron’s Ball of the RGV. The kick-off also included drinks, appetizers, the opportunity to purchase tickets and tables for the ball, and the announcement of this year’s entertainment: Sawyer Brown.

Texas Regional Bank hosts quarterly mixers, and organizers decided to team up with the ACS for the kick-off event, said Felicia Villarreal, business development officer at the bank.

“It’s also an opportunity for the nonprofit to share their story and share what their plans are for fundraising,” she said, adding that cancer is an issue that hits home for many at the bank — especially for several at the branch who had lost loved ones to cancer over the last year.

“When I got to know her story, I couldn’t have picked a better person to honor,” said Clara Chapa, ACS community development manager. “She’s done so much for her community. We all grew up watching her on the news and she’s been very courageous in her battle, so I really wanted to give her the spotlight and let her tell her story.”

Garza worked her way up through the ranks at Channel 5 during her 35-year career, beginning as an intern at age 22.

“We were able to help lots of people, thousands and thousands of people in the Rio Grande Valley,” she said by phone from Austin, living there now after her husband became the state’s DPS counterterrorism manager. “That was my favorite part of working at Channel 5.”

Garza says she loves Austin, especially the wealth of bike trails and friendly people. But her retirement got off to a rocky start.

It took her some time to get into the swing of things — joining a fitness club, getting to know herself again, and deciding that she wasn’t ready for retirement after all.

Garza recently had her first day as a public affairs specialist with FEMA in Austin, helping people like she used to through Channel 5.

When she discovered she would be the Cattle Baron’s Ball honoree this year, Garza says she was floored. “I was so honored to be asked by Clara to be part of this event, but you know, it’s not about honoring me,” she said. “It’s about helping others, and I cannot wait to tell my story.”

Sharing her experience with others is important to Garza because kidney cancer usually doesn’t have symptoms. Garza experienced exhaustion, a nagging pain in her side, and a persistent fever. She found herself calling in sick to work at Channel 5 far more often than usual.

“A lot of people find out they have kidney cancer way too late, after it’s spread,” she said. “Mine was already at stage three — just a few more months and I probably would not have made it.”

After a surgery to remove her left kidney, Garza has been in remission from the rare and aggressive form of cancer. She receives an MRI every six months to ensure it hasn’t returned.

“If people just listen to their bodies, if you suspect, if there’s just like that weird feeling of extra tiredness or you get a fever for no reason, get it checked out,” Garza said. “When you think about $300 for an ultrasound versus your life, that’s priceless.”

Garza says she hopes to use her opportunity at the Cattle Baron’s Ball to raise awareness of the importance of catching cancer early.

“She has a great passion for her cause,” said Rodriguez of the ACS. “She has benefited from our services, so it’s great that she can represent our organization so well. I think she’ll bring a whole new group of people and a new sense of energy and passion to the event.”

Tables and individual tickets for the Cattle Baron’s Ball of the RGV can be purchased online or by calling the ACS at (956) 682-8329.

Learn more about this year’s Cattle Baron’s Ball of the RGV at https://acshped.ejoinme.org/RGVCBB.