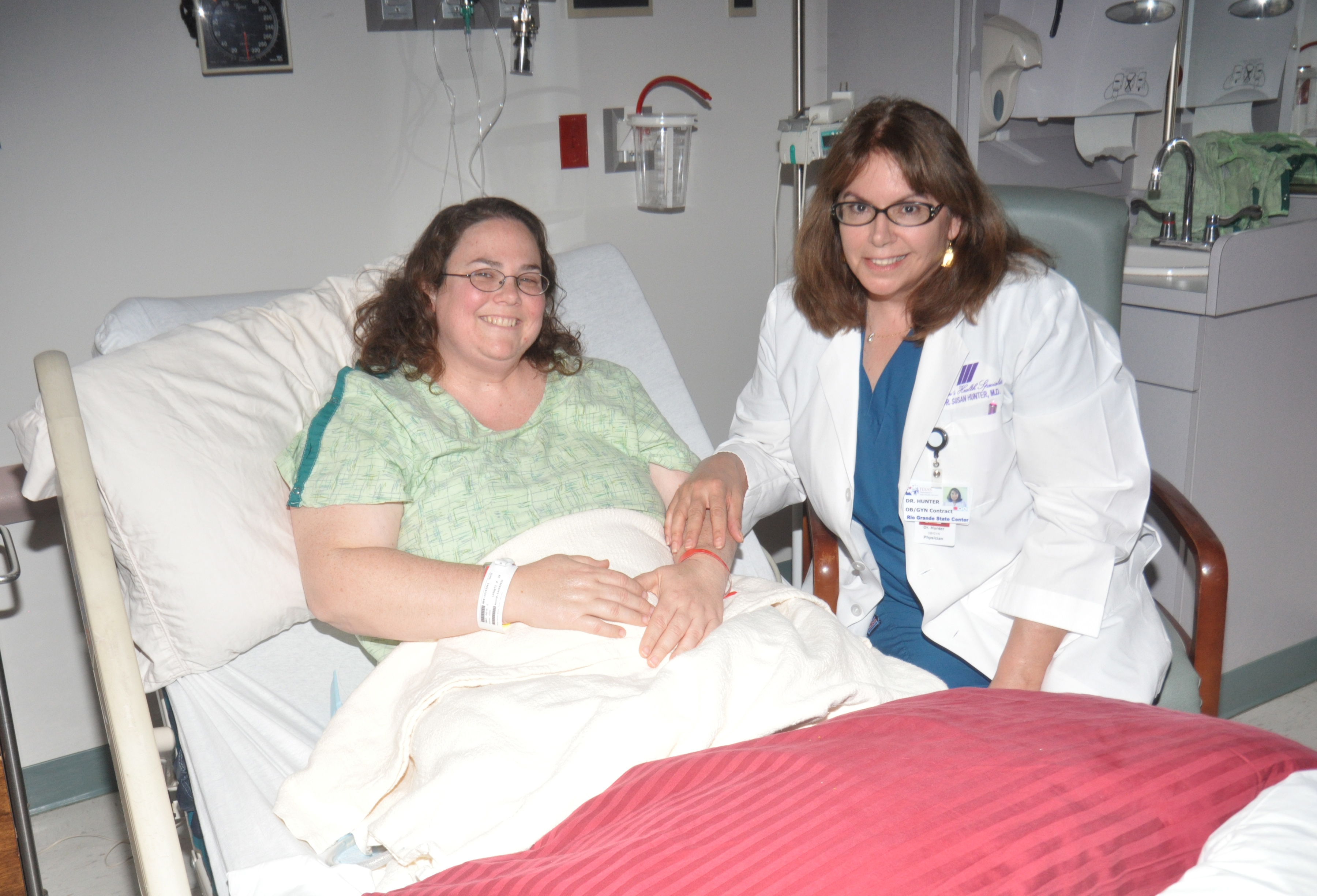 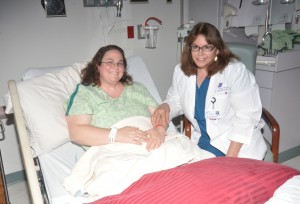 The 100th patient, 38-year-old Julie Teat, is previously from Brownsville — and used to work at Valley Baptist as a respiratory therapist — but now lives with her husband and three children in Corpus Christi.  She said it was worth it to drive more than 120 miles south to have a hysterectomy with Dr. Hunter using the robot at Valley Baptist.

“Dr. Hunter told me I should be back to work in three weeks,” Mrs. Teat said.  “The compassion that Dr. Hunter has is renowned – and the care I received from the Valley Baptist nurses and other staff members has always been very open and very supportive.”

Prior to having the surgery, Mrs. Teat said she watched a video on robotic surgery on You Tube, which helped her and her family feel more comfortable about having the minimally-invasive procedure.

“I was kind of nervous at first, but then I realized that Dr. Hunter is doing the surgery,” she said, noting that the robot is really just a large tool which is controlled by the physician at all times.

During the procedure, the surgeon operates while seated comfortably at a console viewing a 3D image of the surgical field.  Doctors insert surgical instruments and a camera through small incisions.  The physician can precisely guide the instruments using high-definition, 3-D vision monitors which greatly magnify the area of the surgery.  The robot also has an ‘endo-wrist’ which gives the doctor more flexibility in small places and enables more precise suturing.  The system seamlessly translates the surgeon’s hand, wrist and finger movements into precise, real-time movements of surgical instruments inside the patient.

“The robot allows us to do more delicate and precise procedures than can be done by any other method, such as open surgery or laparoscopic surgery,” Dr. Hunter said. “In many cases, this means there is less pain for the patient, less bleeding, and a faster recovery time … it is a great thing for the people of the Valley to have the robot here and to have physicians with the ability to utilize this cutting-edge technology.”

Dr. Hunter was the first physician in Cameron County to perform several gynecological procedures using the robot, including the first hysterectomies (for cancerous and non-cancerous uteri); the first removal of an ovarian cyst (in which a non-cancerous cyst was removed to save the ovary in a young girl); the first procedure to remove benign tumors (called fibroids) which were causing pain and bleeding in a patient’s uterus; the first robotic tubal reconstruction procedure which enabled a Valley woman to be able to successfully conceive and give birth to a child; and the first “prolapse” surgery (vaginal / pelvic reconstruction for a “fallen” vagina). 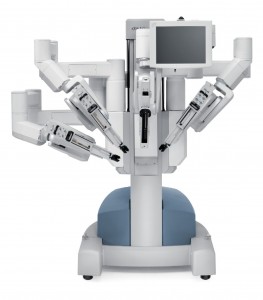 “I am also the first GYN surgeon south of San Antonio to perform single-incision surgery, where all of the robotic instruments enter through one small incision in the belly button,” Dr. Hunter said. “In fact, I have performed the most robotic GYN surgeries south of San Antonio.  I like to keep up – and to offer my patients everything that is out there.”

The robot can also be used for other types of surgery, including prostate cancer surgery in men and general surgeries.  For more information, please visit: http://www.valleybaptist.net/daVinci/index.htm.