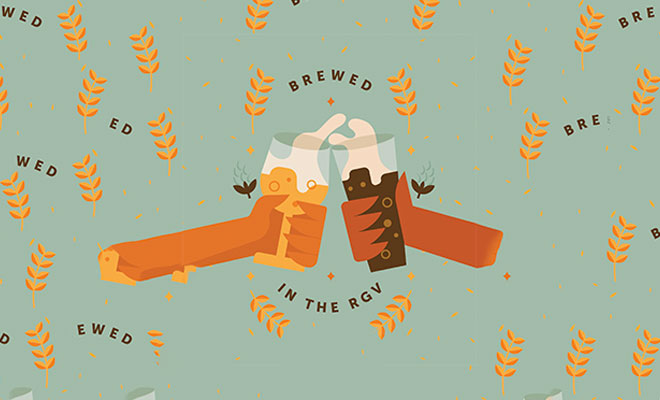 They don’t say that anymore.

“Five years ago it was difficult to find craft beer locally,” said Mayer, who owns RGV Homebrew Supply. “Now we have three breweries and even H-E-B carrying a large craft beer selection.”

Coupled with restaurants and bars like Roosevelt’s at 7, Grain to Glass, the Whistling Duck, and others, RGV beer fans have more access to craft brews now than ever before.

“It’s definitely started to flourish in the last couple of years,” said Mark Garza, one of the owners of Roosevelt’s. “With more and more breweries, it kind of grows exponentially because people start to experience the environment.”

Exposure to different beer options for people in the Valley not only goes toward enriching the palate — it can also influence a change in beer culture.

“We have our own regional identity down here,” said George Rice, operations manager and owner of 5×5 Brewing Co. in Mission. “We have our own tastes, our own norms. We’ve been dominated by macro brewers for a very, very, very long time.”

Operations like 5×5, Rabble-Rouser Brewing Company, and Big River Brewery have taken on the challenge of getting people to branch out from the beers they usually drink — with some small hiccups along the way.

“Some people come in here asking for a Bud Light or a Miller Light and we have to explain to them that we don’t sell that type of product here — we sell only what we make,” said Steve Padilla, owner of Big River. “At first, there was a little bit of hesitancy with some of our customers, but slowly we’ve been winning them over.”

He recalled a customer who was reluctant to branch out to new beers. But after enjoying the Cha Cha Blonde Ale, the customer now orders IPAs and is a regular in the taproom.

Taste preferences are just one hurdle local brewers must leap in the region.

“There are some misconceptions as to what a brewery is since this is so new to the Valley,” Padilla said. “There’s a little bit of education on that part for us to try to inform the community on what a brewery is.” 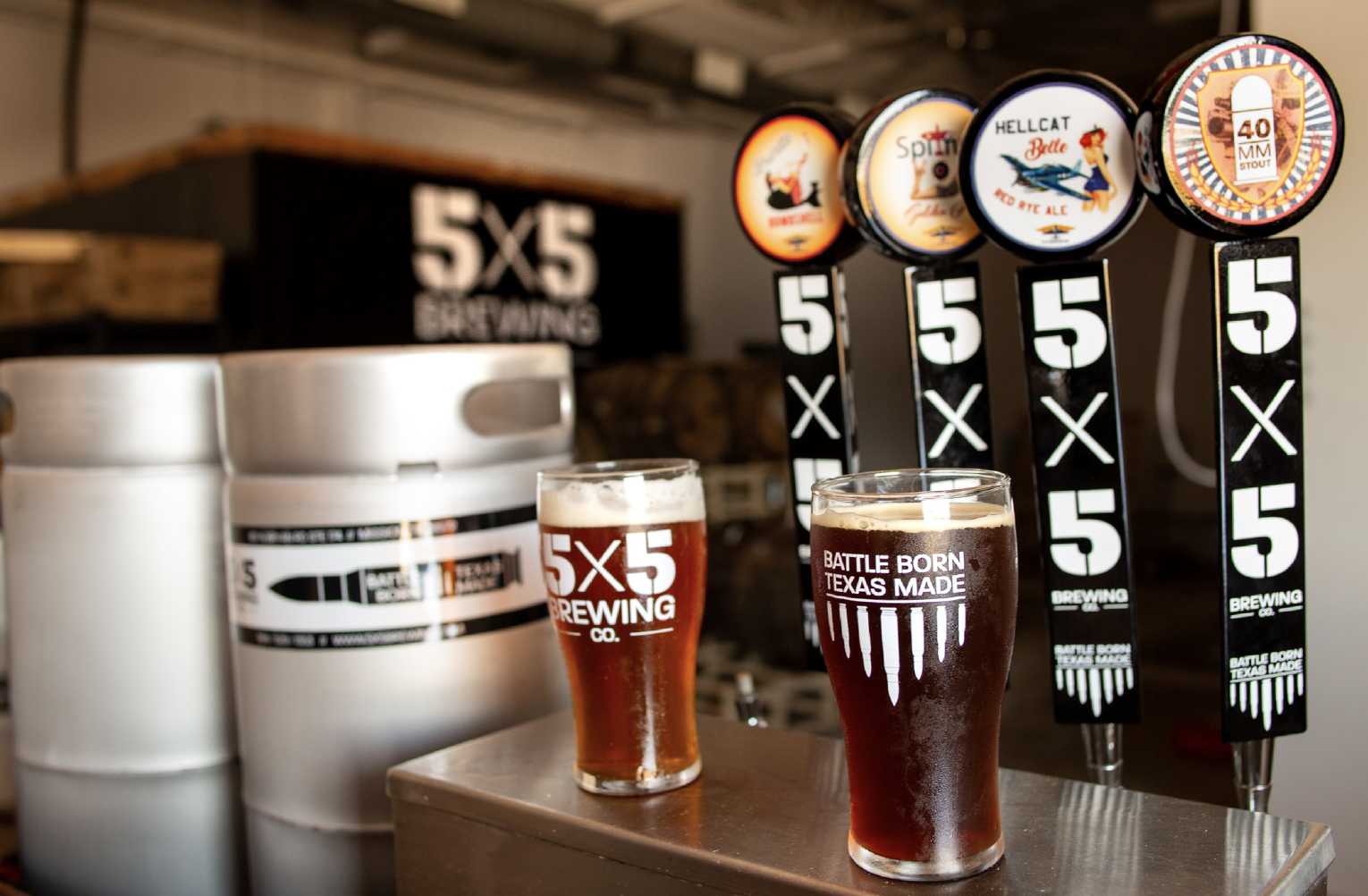 For Padilla, craft beer is a family business. He brews, his wife is the taproom manager, and their daughter also works in the taproom. Padilla developed a taste for craft beer and homebrewing during grad school in Pennsylvania, which gave him access to Yuengling beer.

When he moved back to the Valley, it was a love he never forgot. After visiting breweries in the Austin and San Antonio area, Padilla decided to open his own.

“I realized there was an opening in the market for something like this here in the Valley, so I decided, why not give it a shot?” he said. “I already know how to homebrew. It was a gutsy move, but I think it paid off.”

Since opening in April 2017, Big River has expanded its six draft beers to 10, including a changing seasonal. Padilla says he will begin canning beer this summer for sale in the taproom — starting with the popular Cha Cha Blonde. If sales go well, the Big River Amber Lager is next, followed by the rest of the brewery’s core beers.

For Rice of 5×5, the hurdles come in the form of getting his brewery up and running.

Rice says he aims to open the brewery to the public this summer.

“We knew we weren’t going to be able to come into this with six, $700,000 dollars like other small breweries at our level, so we had to make real methodical decisions,” he said. “Because of that, we make good choices, but it’s taken a lot of time.”

While waiting for the opportunity for a grand opening, Rice and the rest of the employees at 5×5 — most of whom are veterans — have taken their beer to fundraisers, nonprofit events, and competitions.

The feedback he’s received from people who have tried his beer has been glowing.

“I’m very self-critical. I’m like, ‘man, I don’t really think my stuff’s that good,’” Rice said. “But then we get other people that try it and they’re like, ‘dude, this is amazing, you guys are really on to something.’”

Some of the most popular brews for 5×5 are local twists on traditional recipes, like a brown ale infused with honey — Rice’s personal favorite.

But 5×5 is more than just a way for Rice to make money off of something he loves.

“It’s a way I can give back to my community — not just the local community, but my veteran community,” he said. “Everyone always talks about veteran empowerment and entrepreneurship, but no one ever does it. I wanted to show these guys that if you put your mind to it, you can do whatever you want.”

And he says he hopes that 5×5 and the other RGV breweries are just the tip of the iceberg for the regional craft beer scene.

“It’s a huge ripe market,” Rice said. “When we did our market analysis, we honestly could fit about five or six microbreweries in the Valley, not including all the nanobreweries we could fit, as well.”

A representative for Rabble-Rouser — a nanobrewery that has been open since 2016 — declined to be interviewed for this article.

One offshoot of the burgeoning craft beer scene in the Valley is a modest rise in homebrewing hobbyists.

“I see as far as the homebrewers go, there’s been a little bit of an uptick in new brewers, people trying it based on their exposure to Big River and 5×5 and Rabble-Rouser,” said Mayer of RGV Homebrew.

Mayer, along with his wife, Debra, have run the McAllen brewing supply store since opening it in January 2015.

“We sensed a demand based upon our participation with the local homebrew club, Border Brewers, and our own frustration with online ordering,” Mayer said. “We are the only shop south of a line from Corpus to San Antonio to El Paso. We also serve numerous customers from northern Mexico.”

It’s easy to get started in homebrewing, according to Mayer.

“We say if you can boil water, keep time, watch temperatures, and follow simple instructions, you can homebrew,” he said.

Mayer has years of homebrewing experience under his belt.

“I like it because you get to be an artist, a scientist, and an engineer all at once, if you want to,” he said.

Mike Cantu, a general manager for an industrial manufacturing company and homebrew enthusiast, can attest to Mayer’s homebrewing expertise. Cantu, along with Garza, of Roosevelt’s, has been homebrewing for 10 to 12 years.

“We’ve done a good amount of batches within our homebrew life,” Cantu said. “We go out to Austin, or go out of state, we’d just have these amazing beers that we couldn’t get back home, and I decided to have a crack at it.”

Cantu started off with a basic Mr. Beer kit — available at Target, Kohl’s, and other retailers. “Little plastic barrel, mix in the stove top, and you just throw it there and let it ferment,” he said. “Six weeks later, you have a beer, so that’s what got me into it.”

He’s since moved on to more sophisticated setups through the help of Mayer and RGV Homebrew.

“You start having different types of beers, your batches start getting bigger, and you start sharing with friends,” Cantu said.

For now, RGV brewers both big and small look forward to future growth for the industry in the region.

“I think there’s a lot of room for other breweries here in this market and I’m just excited because finally this is going to take off,” Big River’s Padilla said. “I hope it grows to something like the beer scene in Austin and people have a variety. Make it a scene like that, where we all cooperate and we’re all working together.”

He added that a boost in breweries could usher in more tourism to the region.

“The better the craft beer industry does in the Valley, the better we all do,” said Rice, of 5×5. “I’m in favor of there being a dozen more breweries down here.”

The variety of different brews available would be a boon to beer fans, said Garza.

“It would be nice to see the scene grow and us have access to more beers,” he said. “And it’d be great to start with more local breweries and brew pubs.”

And while the Valley awaits future breweries, the growing number of craft beer fans have another outlet for their passion: Facebook.

“There’s craft beer pages and craft beer groups where we host beer shares,” Garza said. “You’re able to try different beers that you really can’t get down here, so we usually do that once a month: Crack a few beers from all over the country. Sometimes we’ll get beers from Europe, Mexico. We’ll just share it.”

But maybe beers produced in the RGV could someday be the cans and bottles being passed around in other places.

“Eventually having some distribution of Valley beers going up to San Antonio, having people seeking beers out here in the Valley, that’s something I would love to see here in the future,” Cantu said.