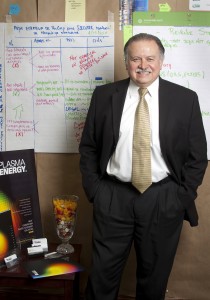 In these modern times, when burgeoning cities struggle to manage rapidly aging landfills, and as a consequence, sacrificing environmental quality through dated waste disposal practices, the time has come to bring new concepts to ensure a cleaner Valley.

“The timing is perfect,” according to Rodolfo Sanchez, who is at the forefront of one of the most innovative ideas in years, taking the region one step closer to a zero waste, and zero pollution future.

“The Rio Grande Valley is in a unique position to solve the global issue of waste, with zero risk to the environment,” according to Sanchez, CEO of Edinburg-based Plasma2EnergyTM, .Plasma2Energy’ s patent-pending technology utilizing microwave-induced plasma gasification has emerged as an innovative alternative energy solution using common landfill waste products.

Founded by Sanchez and a group of investors from Mexico led by Raul Moreno in January 2010, the company specializes in technology that uses “microwave-induced plasma gasification” to turn waste into a very clean synthesis gas(syngas).  The syngas in turn can be converted into electricity and/or liquid fuels that will substitute fossil fuels and crude oil derived products. The energy that can be recovered from a ton of waste or residues can provide electricity for about 1,421 homes in Texas, or 3.17 barrels of crude oil.

“What if you could have a very clean gas, where you don’t have to worry about pollution?” Sanchez asks. “The technology is a very innovative approach to a process called plasma gasification of matter with carbon content that can be converted into a clean fuel gas.”

The company’s impact can be significant. A 2009 EPA report has found that more than 243 million tons of trash are generated every year in the U.S., 54 percent of which ends up in landfills across the nation.

Plasma2EnergyTM utilizes microwave technology that recovers carbon and hydrogen and converts it into syngas from any type of waste materials such as rubber, cellulose, food, wood, paper or plastic, coal, etc..

“Microwaves convert waste into a gas, or into a plasma state using superheated steam, which is then burned to convert into electricity. Applications include power for industrial processes, or in a separate form to produce petro chemicals,” according to Sanchez.

“The problem never ends. Every time you put trash in a landfill, there are environmental consequences,” said Sanchez, who is an engineer by trade. “We developed a technology, where we pull apart the molecules of the waste and we rearrange them to form something that we want. It’s like you’re recycling fossil fuels to put them back to work.”

The company currently operates a pilot plant in Monterrey, Mexico. A first US Plasma2Energy facility, ideally, in the LRGV will act as a springboard into the U.S. market..

“Appealing to cities in the Valley, as well as the larger cities in Texas including San Antonio, Houston and Dallas, marketing the unique technology has taken priority,” according to Sanchez.

“We are in different stages in different cities at this moment. But the things that we need to put together is a package using the technology we have, that is gasification,” he said. “Then we need to source the waste. We plan to process tires and green waste, which is what we are going to do in the beginning.”

Plasma2Energy retains the right to market the process technology, including the equipment and the use of the technology worldwide, being the exclusive agent in Texas. The process is patent-pending in the U.S. and was developed in Monterrey, Mexico by Dr. Antonio Leon Sanchez, Ph.D. The company’s technological research into plasma gasification process took 17 years to bring ito market. It was eventually published by the World Intellectual Property Organization in 2009. The patent has now entered the “local phase,” which gives them the right to apply for a certificate of patent in each of the 160 countries that belong to the WIPO.

“We tend to think we don’t have a problem yet, but you go to San Francisco or Chicago or New York, and you see that trash is a big problem. New York has to ship out garbage on barges and send it down to see who’ll take it,” Sanchez said.”In this region, we are in a very good position to take an opportunity for a new solution to solve the issue of waste. We can become a zero waste region, with zero risk to the environment.”