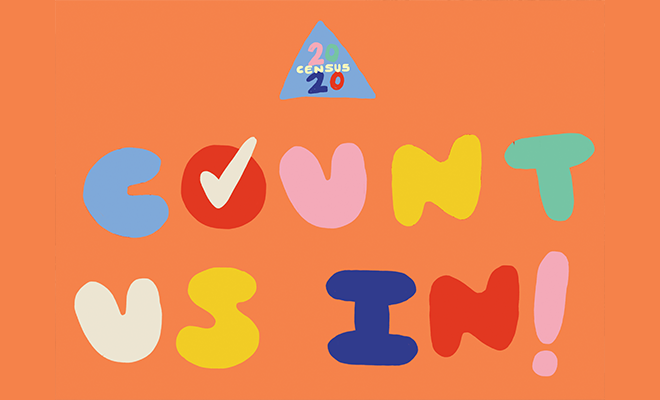 What do all of these have in common? They’re among some 200 federal programs and other initiatives affected by the census.

“Sometimes, people say, ‘does it really make a difference that I be counted?’” said Mary Jane Garza, census partnership coordinator. “The answer is, absolutely it does.”

When people say they want to see change in their community, self-reporting so they can be counted in the census is one of the most effective ways to achieve it.

“We do this every 10 years, and the goal is to count every single person,” Mary Jane Garza said. “It’s about counting everyone once — only once — and in the right place. People need to realize we only do this once every 10 years and it’s crucial because funding, congressional districts, redistricting relies on the count we get.”

The very first census tally was in 1790. This year’s count will be the first time participants will be able to self-report both online and over the phone.

“In 2010, there was only one way to respond, and that was with our paper forms,” Mary Jane Garza said. During that last count, nationally, “74 percent of the entire population responded. In Texas, 71 percent responded.” Response in the Rio Grande Valley was lower than that. “We had counties that only responded 40 percent, 50 percent, so that already tells me that there’s a severe undercount of the population.”

There are a number of challenges facing a complete tally in this region, including hard-to-count populations of young children, immigrants, individuals who speak English as a second language, people without access to the internet, and the prevalence of rural, unincorporated, and low-income communities, among others.

“I think we also have a unique challenge in the fact that we have over 45 cities in the Rio Grande Valley,” said Ron Garza, executive director of the Lower Rio Grande Valley Development Council, an organization that has been instrumental in organizing and facilitating census efforts in the region. “So the fact that we have a lot of different cities, sometimes, people can fall through the cracks.”

The previous count kept complete funding from the RGV.

“We had to stretch our resources more,” Ron Garza said.

But there’s a bright side to 2010’s RGV undercount. It has motivated local organizations and entities to coordinate and mobilize to maximize the count this year.

Complete count committees represent a snapshot of a community. Members of a complete count committee can include leaders from school districts, city government, private businesses, faith-based organizations, nonprofit groups, and more. Those committees are trained by U.S. Census partnership specialists on strategies to boost the success of the count.

Local preparation efforts for the 2020 census began more than two years ago.

“Right now, it’s been a tremendous amount of outreach,” Ron Garza said. “I think the number one strategy that they’ve used is that they are tailoring their message for their own communities.” 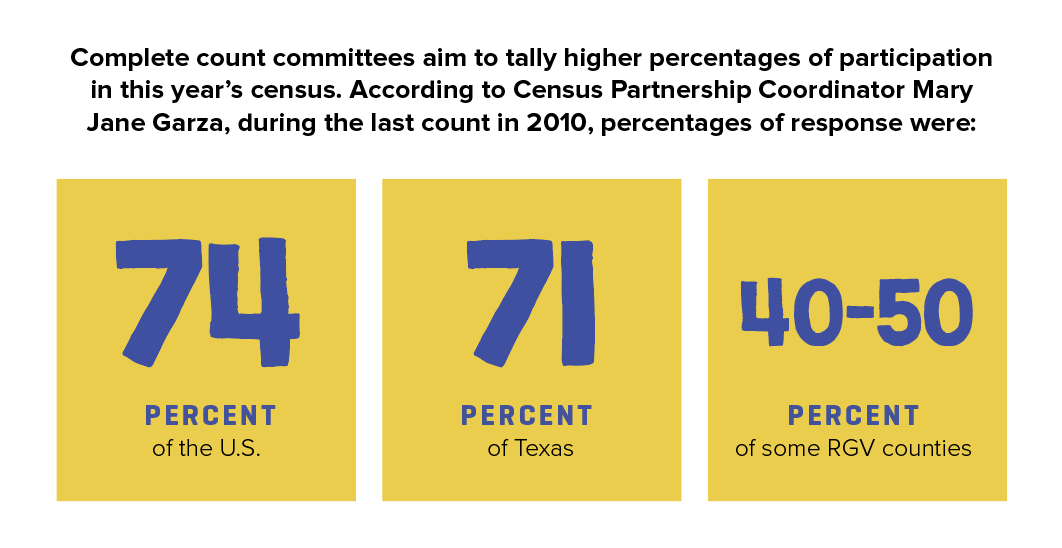 Some cities have created their own census 2020 logo, for example. The City of McAllen created a census-themed parade float. The City of Harlingen will host a concert and outdoor festival that will encourage participants to self-report, Ron Garza said.

All funding for these efforts is generated locally through organizations’ own investments, he added, explaining that the population-based funding formula for grants and programs is too important to overlook.

“If we don’t invest the time and effort now, we could have 10 years of not having the resources we need to serve our area,” Ron Garza said.

There are almost 25 complete count committees across the Rio Grande Valley.

“The complete count committees are designed to get all the different ways that people interact in the places they live,” said Christina Patiño Houle, a network weaver with the Equal Voice Network, an organization that focuses on community development issues and encourages collaboration among local nonprofit groups. “The hope is that you will get information about the census when you drop your kids off at school, and when you go to the grocery store, and when you go to your dry cleaners, and when you go to a community clinic. Hopefully, depending on where you live, you’ll also get direct notification at your house.”

During March, most people will receive a postcard in the mail that includes a secure code they can reference online, by phone, or via mail when self-responding to the census’ nine questions. If participants lose the postcard, they can simply use their address to respond. April 1 marks Census Day. In May, census takers will begin reaching out to households who did not self-report. By December, the U.S. Census Bureau will deliver the counts to Congress and the president.

ust of the government — and fear over the added citizenship question proposal that was defeated by the U.S. Supreme Court last summer — may also contribute to low counts in this region. But census data is among the most secure data there is, Mary Jane Garza pointed out.

“That person at that door with that Census badge, that person has taken an oath and everything we ask is confidential,” she said. “There are no names given, no telephone numbers, nothing. We don’t ask for social security numbers, we don’t ask for driver’s license numbers. We just ask nine basic questions. In the end, when we give the president the report in December of 2020, that report is only statistics.”

RGV organizations like the Equal Voice Network aim to assuage those worries.

“We have such a strong history of community organizing in the Rio Grande Valley,” Houle said. “There are a number of nonprofits that have done incredible work to build relationships with these communities that are hard to count. That’s really important because that’s going to be the bridge between the community and the government.”

Everyone has a chance to participate in this year’s census beyond self-reporting, too.

“Right now, we need people to apply for jobs,” Mary Jane Garza said. “We’re going to be hiring starting in January. We have about 4,000 jobs that are going to be available in the four-county area of the Rio Grande Valley.”

The temporary positions will include day, evening, and weekend shifts, and the pay is from $17 to $19 an hour. Anyone interested may apply online at 2020Census.gov/jobs.

Houle added that there are volunteer opportunities available at RGVEqualVoice.org. People can also follow the organization on Facebook and Instagram for more information on outreach sessions and other events.

Complete count committees and others involved in this year’s census have reason to believe that the hard work they’re putting in now will pay off come tally time. Much of it comes down to making sure residents understand just what’s at stake for the community — and that their participation is crucial.

“The census is a way that is very important for us as a region to say, ‘our voice matters, we are here, we are important,’” Houle said. “This is the way to place our voices on the map.”

Those voices are particularly essential in obtaining representation.

From representation to federal funding and programming, this year’s count affects every facet of the Rio Grande Valley.

“Absolutely everything that we get and every resource available to our community starts with obtaining an accurate census,” Ron Garza said.

How are you planning on reporting in this year’s census? #JoinTheConversation at facebook.com/rgvisionmagazine.