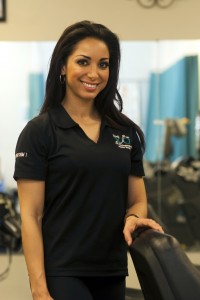 Cristi Cuellar, Physical Therapist at XCELL Orthopaedics in McAllen began training for figure/ fitness competitions on her 27th birthday, while working in Las Vegas. She won her first bikini competition at Fitness America in Hermosa Beach in August 2007, and has placed in several other competitions, including Nationals at Fitness America, Fitness Universe 2008, Fitness America in Las Vegas 2009, NPC Europa—Bikini, and NPC Nationals, to name a few. However, as a full time physical therapist, Cristi explains, preparation for competitions is a challenge, “The last four weeks before competing I have to get really strict on myself. I work out twice a day, eat five small meals a day, drink large amounts of water, go to sleep early, and even practice posing in those uncomfortable heels.” She also works at various health exposes as a fitness model. “I cannot rebound or pig out after the competitions. I have chosen the lifestyle as a health-nut!” 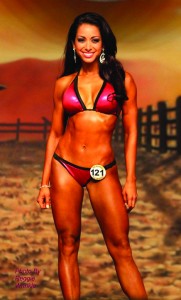 Fortunately, Cristi’s career as a physical therapist enables her to maintain her figure as it’s her job to help others get their bodies back into shape as well. Working at an outpatient clinic, she sees patients of all ages, with all types of ailments, including people with on-the-job injuries, post surgical patients, and pediatric patients with various diagnoses. “We have a program for pediatric patients, a wellness program that works on coordination, speed, strength, and most of all, dietary consultations.” Ironically, Cristi’s passion for physical therapy began when she was a patient herself. As a child raised in Pharr, the South Texas climate allowed her to participate in outdoor sports throughout her childhood. She was in track and field, dance and gymnastics, and eventually became a varsity track star in high school, as well as an “All-Star” cheerleader.  However, during cheer practice in 10th grade, she fell from the top of a cheerleading stunt and tore her ACL. “Doctors told me if I wanted to continue to do high level sports activities I needed surgery because the ACL is the most important ligament needed to stabilize the knee during jumping and pivoting. After surgery though, I was miserable. In high school, a students’ identity is determined by what extracurricular activity they’re involved in and mine was taken away.”

Cristi had no idea what physical therapy was until her doctor prescribed it. However, she quickly learned that physical therapists are also emotional therapists as they deal with people’s temporary or permanent physical handicap.  “Recovering from surgery is one of the most difficult challenges to overcome, and I soon knew I would make it my career.” 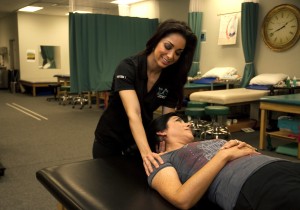 Cristi went to Baylor University, where she graduated with a degree in health science studies, and got her master’s in physical therapy from Texas State University- San Marcos. She is happy to practice physical therapy back in the Rio Grande Valley acting as an emotional motivator herself, “I like to tie the fitness aspect to physical therapy to teach all my patients about how exercise, nutrition and mental wellness affects the body’s healing process.” 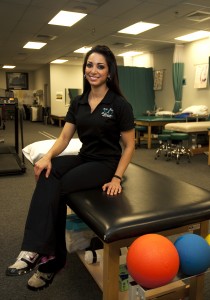 Within the last few years of training with other trainers and sports nutritionists, for her competitions, Cristi has learned so much and says that when she follows a diet and exercise regiment herself, she feels her best, looks her best and wants to give that knowledge to others, “I want my patients to feel their 110%, so I try to share everything I can.”

XCELL Orthopaedics also has a program for kids, which facilitates them to reach all their motor mile stones, especially in this sedentary electronic age. Parents not only learn about proper nutrition and exercise and how it can affect their abilities in the work force, but also how it can affect a child’s test scores in school. In addition, Cristi has worked with so many kids who are as young as 12 and 13 and are already on diabetic medication. However, while they don’t understand nutrition, she enjoys teaching them about diet and exercise, “It takes education to learn about the proper nutrients, and while I’m disappointed, sometimes I feel like I’m meant to be their physical therapist because I want to share my knowledge with them and teach them how to schedule exercise into their routine.”

While Cristi is a physical therapist at XCELL Orthopedic, and has had a successful career in fitness competitions, perhaps her best strengths lie in being a wellness coach and positive community influence.