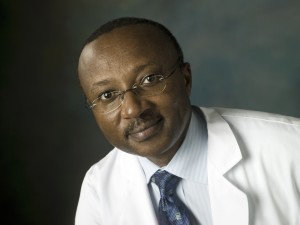 Practicing medicine is a privilege, according to Dr. Charles Rurangirwa who as one of Brownsville’s premier doctors of obstetrics says his job teaches him to value and appreciate life, one baby at a time.

This belief is personal for Dr. Rurangirwa, whose experiences in some of the most impoverished, as well as medically undeserved locations in the world have shaped a career philosophy based on an appreciation for culture, life and family.

Born in Rwanda, but growing up in Uganda until his late teens he saw first hand, places torn apart by war and civil unrest. The need to help people was fostered in Rurangirwa at an early age when, in the midst of the chaos, he witnessed the evacuation of many of the country’s professionals, who feared for their safety.

“When I was growing up, I saw people who traveled many miles to see a physician,” Dr. Rurangirwa said. “I have always been interested in being able to help when I saw these people in lines waiting all day.”

As a result, moving from Africa to Mexico, then Argentina and finally California at the age of 18, he spent a large portion of his adult life in Latin American countries. It was his experiences there, which fostered his appreciation for the Hispanic culture that remains to this day.

“We very much enjoy the culture here, that is my wife and I,” he said. “I have lived in Mexico and Argentina, so that has helped me to understand the Hispanic culture and communicate in Spanish what patients cannot say in English.”

He received his doctorate from the Universidad De Montemorelos, Escuela De Medicina in Mexico in 1985. Upon graduation he then moved to Argentina, where he went to work in an Adventist hospital, before moving to the U.S. for more training.

He completed his residency in obstetrics and gynecology at King Drew Medical Center in Los Angeles in 1997. It was there where he received numerous accolades including “Most Outstanding Resident”, “Best Teaching Resident”, and “Best Graduating Resident”.

Ten years later he was recognized as “Physician of the Year” by Valley Baptist Medical Center in Brownsville.

“Having lived in Latin America there was no culture shock for me. Having had my training in Los Angeles, there was no culture shock with its language,” he said. “But there is no doubt in my mind that the population here in the Valley, in general are a very friendly community. You get to know the teachers of the children, you get to know the people you work with by name. It’s the interrelationship of a small community, whereby you provide services and you help each other in the best way possible.”

Dr. Rurangirwa was initially lured to the Valley by the Tenet Corporation, the entity that previously owned Valley Baptist Medical Center, and which was partly responsible for recruiting healthcare providers to undeserved areas like South Texas.

The company at the time, laid out incentives for doctors to come to the Valley with the intention of staying two to three years. Rurangirwa instead decided to make the Valley his home, and has thrived in the area for the last 14 years. He is Board certified in obstetrics and gynecology, and his practice is located at 1119 Central Blvd in Brownsville.

A young population, a sense of community, as well as the influx of talented and dedicated healthcare providers all make the region the ideal place to live and work, he said.

“There is a lot of necessity, and there are a lot of people who still don’t have access to healthcare (but) if we can be available to provide those services, then it gives you a true satisfaction, when you begin to help the community,” he said.

“Somehow I think it has helped to have other physicians who are very well qualified, very competent and are available to consult with each other and provide excellent patient care, whereby patients don’t necessarily have to move out of Brownsville or out of the Valley to get better care,” Rurangirwa said.

Local hospitals are also providing better equipment and investing in emerging technology needed to assist doctors and patients. These factors have helped minimize the number of healthcare providers moving to bigger cities, he said.

“Even the patients themselves, from what we have noticed, appreciate the care we provide,” he said. “That gives me the satisfaction that I am providing the best care possible to people who may not had that, and now they don’t have to go far to get that care.”

Even though the demands of the job are great, according to Rurangirwa, he is encouraged by his family, who appreciates his commitment to helping others despite the sacrifices. He spends his free time with his wife and two daughters, aged 16 and 11

He also donates his time every Tuesday morning to the Mary P. Lucio Health Center, where he assists expectant mothers who don’t have access to regular healthcare.

“There is a lot of sacrifice involved with practicing medicine because you’re not at home a lot, and then sometimes you have that guilty conscience knowing that you’re not spending as much time with your family. But they appreciates the fact that you’re helping other people instead of being demanding, they actually encourage me to continue.

“I’m very happy living in Brownsville and staying in the Valley. I plan to continue providing care and service until I retire. I  have no plans to move. My family is very happy being here as well. We still have a long way to go to make sure that everybody in town has access to affordable and excellent healthcare.”

“ I think you value life more, and appreciate every day that you live. I think it’s a privilege, and something we should be grateful for,” he said.