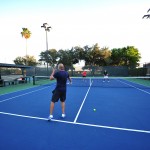 As a talented nine-year old boy bouncing back and forth on the tennis court at The Club at Cimarron, a young Daniel Reyna – now tennis director at The Club – couldn’t have predicted what a home The Club would become for him.

A gifted young player, Daniel spent hours on the courts at The Club training and competing under skilled coaches. He later moved to the renowned Saddlebrook Tennis Academy, just north of Tampa, Florida for a chance to participate in their demanding program and compete against some of the best in the nation.

Only after wrapping up his travels and competitive tennis career in college did Daniel try his hand at teaching, thinking that it should come as naturally as playing tennis did. Daniel admits teaching wasn’t second nature at first but aiming for perfection certainly was. His dedication led him to seek out a mentor and perfect his teaching skills. Daniel taught all over Texas for years, but in 2011, he jumped at the opportunity to move home to The Club at Cimarron to serve as a tennis pro and eventually step into the role of tennis director. He worked hard as a tennis pro and impressed his clients with his ability to focus in on areas of weakness and build up players at all levels. “It doesn’t matter if someone thinks they have two left feet and no coordination, I’ll teach them to play – and play well,” he explains. Club member Losa Jang expresses her gratitude for finding Daniel and the tennis program so quickly after moving from California. Right away, she appreciated “his teaching ability, his observations and his ability to see and explain in a way that I understood.” 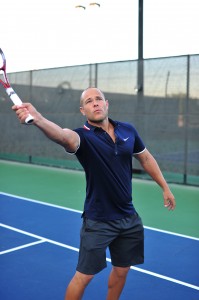 Frank Arrendondo, longtime member of The Club, proudly describes Daniel’s “world class instruction.” “He breaks it down in such a way that anyone can understand.” In fact, Mr. Arrendondo has deemed Daniel his “tennis guru.”

Daniel’s style is very involved as he helps fine tune a player’s skills. He has the benefit of gleaning from the expertise of his many former coaches as well as his years of competitive play. My old coach Rich Hotz’s voice still echoes here on the courts.” Thoughtfully, Daniel recalls, “I went from a kid on the court to having this great opportunity to direct the program, and I actually think I’m a better coach now than I was a player.

As for his role as tennis director at the club where he first stepped on the court, Daniel is truly grateful and dreams about the future. “I hope to add on to the great strides that have been made in the Valley in teaching and build the program into something special,” he enthuses. “My goal is always to maximize players’ potential through creating a competitive environment.” As a whole, the tennis community in the Valley is much stronger than it was back when Daniel was starting out, but he has a vision to make it bigger and better and to work with other professionals to build up a better future for the next generation of tennis greats in the Valley.

Daniel gushes about the incredible staff and welcoming community of club members and has already seen growth in the tennis community within the last year. The Club offers lessons and competitive leagues for players at all levels – from private lessons and group lessons to cardio and strength conditioning work – to people of all ages; and who doesn’t want to be a part of a larger community and feel like they belong somewhere? According to Daniel, “The people truly make it what it is. They’re trying new things, are eager to learn, and really are welcoming and kind.”

People walk away from an encounter with Daniel Reyna thinking that this year-round sport just might be for them. And if you’re not convinced after a quick conversation, he’ll meet you on the court. A list of people who had previously sworn off the sport because it was too hard or too “boring” or too something, can testify that Daniel brought them back out on the court and helped them to learn it properly, play well and really love it.

“Tennis has almost always been a part of my life, so I’m incredibly grateful for the position I’m in; I enjoy this game and love it more each day.”