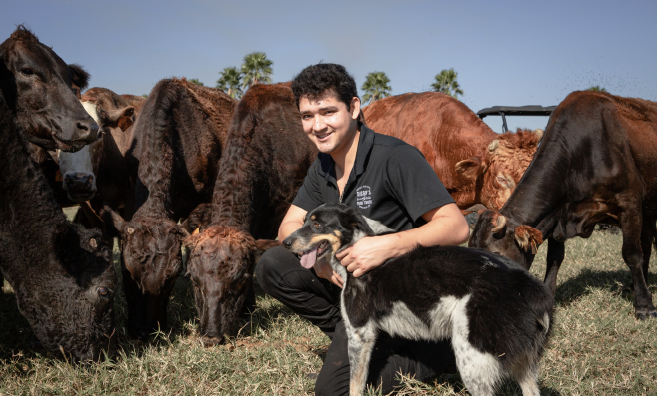 Saunter over to the McAllen Food Park on a weekday evening and you’ll be greeted with an unexpected twist on casual dining. Linger long enough and you’ll notice the aroma of freshly roasted tomatoes and other home grown veggies.

Diego Ramos, owner and chef at Diego’s Food Truck, has had an interest in preparing dishes early on — experimenting with different flavors has always been second nature to him. He shared the vegetables at local farmer’s markets, gaining loyal customers from all over the Rio Grande Valley long before opening the food truck.

“You know I kind of decided that McAllen Food Truck Park was like the best place for me to start a central location. The demographics of the customers that come here are mostly families. That was the same thing at the farmers market,” Ramos said.

One of the most popular dishes on the menu is the burgers. Made with meat sourced from their family farm, Provenza Cattle Ranch in Elsa, Ramos tends to the cattle himself, ensuring they are grass-fed.

In the past year he’s been open, Ramos has not had the need to go buy meat at a grocery store —  that is one constant that comes straight from the farm.

Though his family farm has been around for years, Ramos prides himself on specializing in beef. He admits that due to the low number of cattle, he needs to get creative in creating dishes that serve every part and cut.

“Once, I made a dish of just bones and cartilage,” he said. “What I want people to understand is that I’m out there with the cows myself. I go with the butcher and request the cuts I want.” 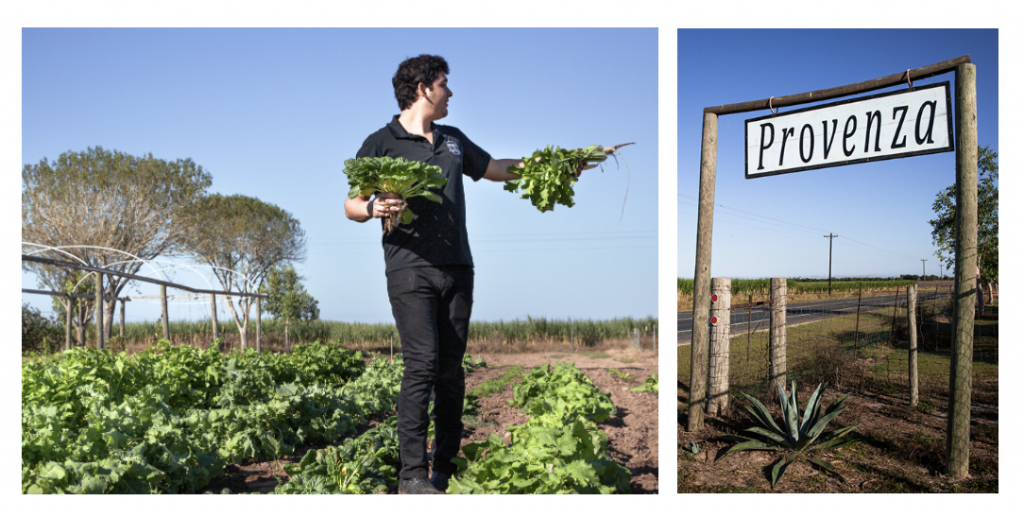 The eatery’s menu is not limited to one culture. Ramos experiments with different dishes every day. The burgers are always on the menu, but the vegetables are constantly switched out depending on what’s in season.

“We come up with ways to just make it work,” he said. “We have Taco Tuesday but then Wednesdays we do a Paella Wednesday. Thursdays used to be mushroom Wednesdays from my friend who produces mushrooms. We would buy all sorts of gourmet mushrooms and we like to slice up a steak and serve it up with some mushrooms that are sauteed — and then that changed Thursday to steak night.

Diego’s Farm to Table Food Truck opened its doors in September 2019 only to face an unavoidable obstacle a short six months later. During the month it remained closed at the beginning of the pandemic, Ramos was able to restructure his operations and integrate better planning for the menu. 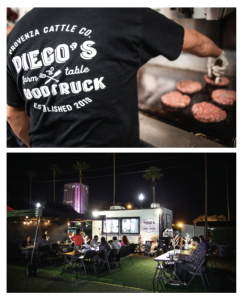 “That was a little scary at first. I think March was probably the most difficult month just because I was divided between being the restaurant that stays open and caters to people during this time, or just closing and kind of staying away from all the problems,” he recalled. “In a way, I feel like we were moving and growing too fast before the pandemic, so the month that we had off during March I kind of took the time to rethink everything that we did.”

After taking the time to restructure, Diego’s Food Truck reopened with a better understanding of the impact they were having on the community.

“People are coming over here to experience what farm-to-table is and knowing that it’s going to be good just by whatever is on the menu,” said Ramos. “We will post the menu two or three hours prior to when we open, but people are always telling us ‘I came today because the menu looks amazing.’ The original intent of the changing venue was for our customers to stay updated and never expect the same thing.”

His creativity is not limited when it comes to piecing tasty options together. Diego’s Cherry Tomatoes, an item on the menu, is a direct reflection of his imagination at work.

“One day, I threw some tomatoes I had with other veggies I had on hand at the time, and my mom tasted it and was happily surprised. She insisted it be added to the menu and now it’s one of my favorite dishes to serve,” he said.

Ramos says that the food truck would not be as successful as it is without the support of his family and his team.

“I really am thankful for all the people we’ve met and all the help we’ve gotten along the way,” Ramos said. “You have no idea how many hands have helped. It’s always important to just take it all in. I’m taking in all the advice.”

Diego’s Food Truck offers a different lineup of dishes daily, depending on what crops are available at the farm that day. You can find the updated menu on Instagram and Facebook as @diegosfoodtruck. They are open from 6 to 9:30 p.m. Tuesday through Saturday at the McAllen Food Park.

Which is your favorite item on the Diego’s Food Truck menu? #JoinTheConversation at facebook.com/rgvisionmagazine.