HARLINGEN – Dr. Manuel Espinoza, Urologist, has performed the Valley’s first robotic surgery to repair a ureter – a narrow tube which carries urine from the kidneys to the bladder.  Following the first surgery, a 64-year-old Valley man said he is now free of pain he has lived with for the past 20 years.
Dr.Espinoza used the da Vinci® robotic surgical system at Valley Baptist Medical Center-Harlingen to perform the “pyeloplasty” procedure.   The minimally-invasive technique — in which specially-trained physicians guide precision robotic instruments — uses much-smaller incisions than traditional urological surgeries.  In many cases, this means that patients lose less blood, have less scarring, less risk of infection, shorter hospital stays, and faster recovery times.
“They used to open you up all the way down … but now there’s not much (incisions) there,” said David Pringle of Los Fresnos, the Valley’s first patient to undergo the urological surgery with the robot.  The 64-year-old Army veteran showed a patch covering four small holes – the only sign that he had just undergone surgery.
Mr. Pringle said now he no longer has pain on the right side of his back – pain that started gradually at least 20 years ago, but had been getting worse.  He added it’s a good feeling that the pain is gone – without having to take medication.
Mr. Pringle didn’t know it at the time, but his “back pain” – which he thought just came with ‘old age” — was actually caused by a condition he was born with, in which a renal artery was crossing over his ureter, compressing and constricting the flow of urine from his kidney to the bladder.  Over the years, Mr. Pringle had gotten used to living with the condition – but started to really feel the pain during the past two decades … especially when he was working outside in his yard, bending over and picking up things.
“The renal vessel causes an obstruction of the ureter, and this is just like putting your foot on a hose,” Dr. Espinoza said.   The obstruction can cause severe back and abdominal pain – as well as damage to the kidney, and ultimately loss of the kidney itself.
During the robotic surgery, Dr. Espinoza was able to dissect out the compressed portion of the ureter, place it over the renal vessel – and then re-attach the two ends of the ureter.
In performing procedures with the robot, Dr. Espinoza operates while seated comfortably at a console viewing a 3D image of the surgical field.  The physician inserts surgical instruments and a camera through small incisions.  The doctor can precisely guide the instruments using high-definition, 3-D vision monitors which greatly magnify the area of the surgery.
The robot also has an ‘endo-wrist’ which gives Dr. Espinoza more flexibility in small places and enables more precise suturing.  The system seamlessly translates the surgeon’s hand, wrist and finger movements into precise, real-time movements of surgical instruments inside the patient.
Mr. Pringle and his wife, Mary Lue, said it is a very good thing for the Valley community that Valley Baptist offers robotic surgery and has physicians such as Dr. Espinoza who are trained to perform minimally-invasive surgeries.
“This is much better (to have robotic surgery),” Mrs. Pringle added.  “We definitely recommend it.  And Dr. Espinoza is great … a God-send.  We’re lucky to have found him.”
Now that he is feeling better, Mr. Pringle — who has two grown daughters and four grandchildren — is looking forward to getting back to tackling yard work and small wood and metal projects around his house and in his garage.
“I have some ‘honey-dos’ … and I’ve made wooden (toy) helicopters for my grandkids … it keeps me active,” Mr. Pringle said. 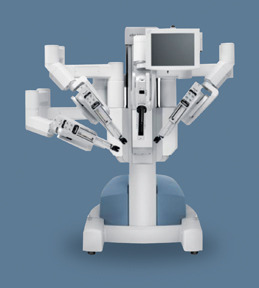 The robot is also being used by other specially-trained surgeons at Valley Baptist for various types of surgery, including prostate cancer surgery in men, gynecological surgeries in women, and general surgeries.
For more information on robotic surgery and other advances in health care in the Valley, consult your physician, visit www.ValleyBaptist.net.
Valley Baptist Health System is an 866-bed faith-based regional health system located in the Rio Grande Valley of Texas.  It is focused on improving the lives of the people it serves by providing high quality health care and medical education throughout South Texas, guided by the healing and teaching ministry of Jesus Christ.
Valley Baptist extends many of its services beyond its facilities and into local communities, offering free screenings for the community, support groups and numerous educational opportunities.   For more information, visit www.ValleyBaptist.net (and www.FaceBook.com/ValleyBaptistMedicalCenter).