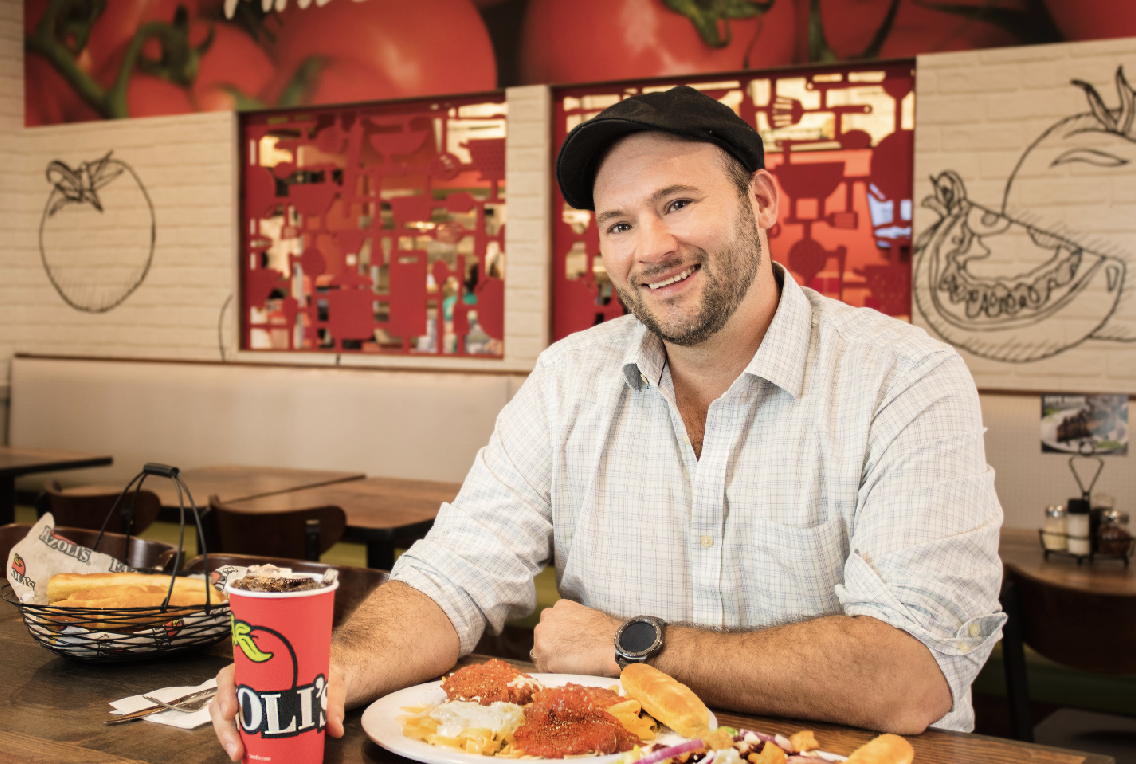 Jerry Maddox always knew he wanted a career in the restaurant industry.

“I’ve been in the restaurant business my whole life,” Maddox said. While attending Mission High School, he worked at a Japanese steakhouse in McAllen. “I just grew up in the industry.”

Before Maddox opened his own Fazoli’s franchise in Pharr, he was with Chili’s for 14 years, working his way up to managing partner. He went into his franchise with a lot of experience under his belt. When he started thinking about branching out and doing his own thing, he knew that he wanted to do an Italian-based concept because there wasn’t a lot of competition and the costs were stable compared to other concepts.

While in the planning stages, he discovered the Fazoli’s franchise and realized it was a good fit for what he wanted to do. The franchise has been around since the 1980s, mostly in the Midwest, with over 200 units. Texas has several in the north, but nothing this far south. Maddox and his business partner bought the franchise rights for Fazoli’s in the Rio Grande Valley and opened their first location in Pharr. They plan on opening four more restaurants within the next six years in different locations around the Valley.

The processes at Fazoli’s allow employees to get the food out fast compared to other restaurants. The longest cooking items are the baked dishes at four to five minutes. Fazoli’s features three impinger ovens in the kitchen to accommodate different dishes from an extensive menu. Fazoli’s serves salads, sandwiches, pasta dishes, baked pasta dishes, and pizza. Everything is made to order and there are vegetarian options, as well. 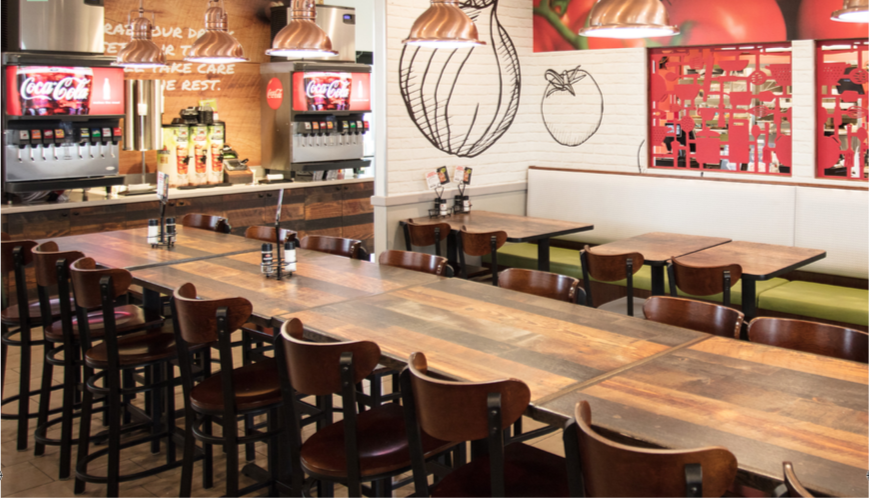 Maddox says he believes that people in the Valley and around the world have changed how they view going out to eat. It has become expensive and time consuming to go to a full-service restaurant.

“Going out to eat with a family of four is $100 and two hours of your life,” he said. One of the premium dishes at his restaurant is only $7.99 and there are daily deals for $5 with a drink — including unlimited breadsticks. Short cooking times and the convenient drive-through make good dining easy and accessible for today’s busy families.

Fazoli’s has also recently launched an app. “You download the app and you can place your order, pay online, and walk in and pick up your order without ever having to talk to a human,” Maddox said. The app also has a loyalty program so each dollar you spend turns into points. You can redeem the points for free food.

Maddox approaches business in a very mindful way. Even though this is a franchise, it is also a Valley-owned business — the money for the business came from the Valley and stays in the Valley.

“Capitalism is a bad word nowadays, but really capitalism is the idea that I have goods or services that I am going to provide to you, and it’s a bartering thing where we both get equal enjoyment out of it,” he said.

Maddox and his partner follow the practices of Conscious Capitalism with the belief that “there is good that can happen with capitalism.” When choosing a location for their restaurant, they looked at the 2 acres on the map, and thought about what they could do with the space. They made a conscious decision to save the trees that were on the lot. Instead of building something they could rent out on the extra space, they worked with the City of Pharr to preserve the greenery because it would be better for the community, the environment, and the birds than just another building.“When the city and the entrepreneur come together, we get to do things like this,” Maddox said.

Conscious businesses focus on their purpose beyond profit. “It’s what you do for your community that you are in,” Maddox said. By going with the natural landscaping, businesses don’t waste local resources in maintaining plants that don’t belong in the area. 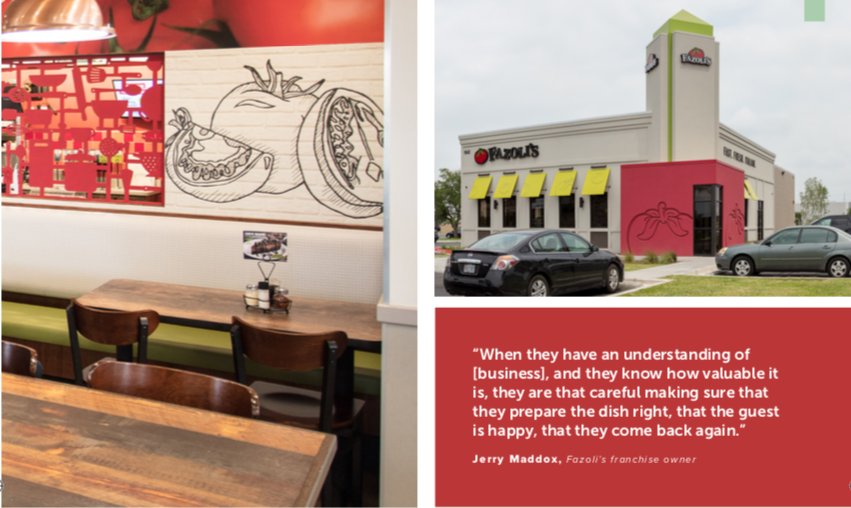 Fazoli’s has over 200 locations — many of them are company owned — but Maddox has customized his franchise to suit the area and his way of doing business. With all the farms around the Valley, he thought it made sense to buy local produce instead of having it shipped from the corporate headquarters. Instead of spending a lot of money on billboard advertising, he decided to invest in his community.

Maddox is a member of the Texas Restaurant Association (TRA), and has served as chapter president. He and the other members are actively working to improve their industry.

“How do we make our industry better?” Maddox asked. “For me, it’s education. The hardest thing I do as a restauranteur is get good help.”

The restaurant industry is the third largest employer in the nation. The Texas Restaurant Association Educational Foundation introduces programs in high schools that prepare students for work in the industry. Participants will come out with an understanding of how the restaurant business works, in terms of cost.

“When they have an understanding of that, and they know how valuable it is, they are that careful making sure that they prepare the dish right, that the guest is happy, that they come back again,” Maddox said. The Rio Grande Valley Chapter of the TRA, with the help of Maddox, has provided seven Rio Grande Valley schools with the curriculum, including McAllen.

Maddox acknowledges that three out of five restaurants fail in their first year, but he knows what keeps customers coming back. An establishment that makes you feel important will have a better chance of succeeding.

“I think that is what humans should do for each other,” Maddox said. Respect, courtesy, and excellent customer service can make the experience more memorable than just the serving of the food.

When asked what his passion was, Maddox replied, “It’s what I do every day. I serve. I serve food, I serve my team members, I serve my community.”