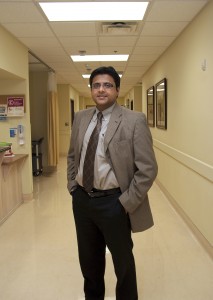 For Dr. Dipen Parekh, who is in practice with UT Medicine San Antonio, making routine visits to the Valley over the course of four years has been one of the most uplifting experiences of his life.

Friendship, satisfaction and the gratification of treating thousands of Valley patients has made an impression on Dr. Parekh, who calls the people here his family, and an extension of his own home.

A potent mix of technology and traditional surgery are leading the way for urologic cancer treatment at Doctors Hospital at Renaissance in Edinburg.

As one of a handful of fellowship trained urologic oncologists from San Antonio, he is also one of the few faculty to travel to the Rio Grande Valley to provide specialized health care and health professional education.

It’s become second nature for Dr. Parekh, arriving in the area twice a month to perform robot-assisted surgeries at DHR using the hospital’s “Da Vinci” surgical system. Beginning on a Thursday, as he has done for the past four years, he holds an entire day of clinic before starting surgeries on Thursday afternoon. He operates on patients all day Friday before catching the last flight out of Harlingen back to San Antonio.

Dr. Parekh has performed close to 1,000 robotic procedures, more than 250 of those at DHR, since he began more than five years ago. Yet for Dr. Parekh, the single most important aspect of the technology has been to help Valley people fight cancer while avoiding trips to Houston or San Antonio to get care. 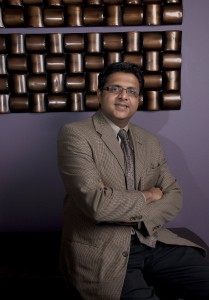 Manipulating handles and pedals, which control robotic arms positioned above patients, the robot mirrors Dr. Parekh’s micromovements. The technology, which DHR bought for $1.6 million in 2006, enables Dr. Parekh to view kidney, bladder and prostate cancers in 3-D and at 10 times the magnification of traditional surgery.

“The philosophy is, never to fit the patient into the technology, it should be the other way around,” Dr. Parekh said. “While robotics may work for one patient, it might not be the right choice for another patient, where a traditional open surgery or laproscopic surgery might be the way to go. I think 60 to 70 percent of our practice in oncology entails robotic surgery. The other 30 percent is still undergoing a traditional open surgery Being facile  in all approaches is a good skill to to possess in treating patients with cancer.”

Dr. Parekh received his undergraduate education from Mumbai, India and his M.D. degree from Poona University. He then pursued a residency in General Surgery and Urology from Mumbai University, India. He was awarded the Rotary International Ambassadorial Scholarship that enabled him to pursue further training in the United States. After a Residency in Urology at Vanderbilt University Medical Center under Dr. Joseph Smith, who is the chairman there, he completed a fellowship in Urologic Oncology at Memorial Sloan Kettering Cancer Center in New York City.

He is the first holder of the Doctors Hospital at Renaissance Distinguished University Endowed Chair in Urology, and serves as Chief of the Division of Urologic Oncology, Director of Fellowship in Urologic Oncology and Director of Robotic Surgery in the Department of Urology at The University of Texas Health Science Center at San Antonio. UT Medicine San Antonio is the physician practice of the Health Science Center.

“It has been a remarkable journey,” Dr. Parekh said. “I feel extremely blessed to rest on the shoulders of some absolute legends in our field, whether that was at Vanderbilt University, Memorial Sloan Kettering Cancer Center or my leaders and wonderful colleagues at University of Texas Health Science Center San Antonio.

Dr. Parekh credits the foresight of leaders at DHR, whom he called visionaries, in their initial investment to bring robotic surgery to the Valley. From the onset, a unique arrangement between the Health Science Center and DHR enabled only the most highly qualified medical experts to arrive in the Valley to assist patients, he said

“A lot of credit for this should go to Alonzo Cantu and the leadership at DHR to really have a vision to do something like this. This entire paradigm is very unique. This entire community and academic partnership is very unique and an example that doesn’t exist in a lot of places around the country,” Dr. Parekh said. “The other folks who deserve a lot of credit are the local urologists here for embracing us, and supporting us and putting the faith in us to take care of their patients. When I finish the surgeries, I then leave to San Antonio  with complete assurance that the local urologists will take the very best  care of the patients. They deserve a lot of credit for the success of this partnership.”