The first thing that strikes you as you spend even five minutes listening to Dr. Guadalupe Correa-Cabrera talk is her depth of knowledge on her chosen subject matter. The second thing that strikes you is her passion. But it is only when you start asking questions and probing, that you realize just how immense the subject is that she has chosen to tackle. 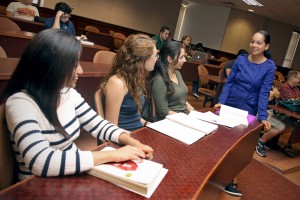 With her expertise and teaching fields in public policies in the Mexico-U.S border region; U.S.-Mexico relations; American Hispanic politics; and Latin American politics, she has a nuanced and finely honed perspective on the eruption of violence in Mexico and particularly the Texas-Tamaulipas border. Her focus has been mostly on organized crime, poverty, unemployment and endemic corruption in Mexico’s “new democratic” times.

Talking a mile a minute, Dr. Correa-Cabrera explains in a phone conference that one of the causes of increased violence is the increase in drug consumption, not only in the United States, but in Mexico itself. “After 9/11 the US tightened its borders,” Dr. Correa-Cabrera explains. “That created a problem for the drug cartels. They had product they needed to sell, but had a harder time getting it across the border. So they turned to their countrymen to sell it to.” That increase led to more competition and more cartels being created. “Now we are seeing a modern phenomenon, something unique to the 21st Century and globalization. In the past if a cartel was brought down, it was like a house of cards, everything else in the organization collapsed too. That is no longer the case. Drug cartels these days are like the Greek Goddess Hydra whose heads grew back after being beheaded.” New cartels are being formed all the time, she says. Those cartels are now fighting each other for dominance, and unfortunately innocent bystanders are often the victims.

Violence in Mexico has risen dramatically since 2006. In 2010 alone over 15,000 people were killed in Mexico. In some areas the percentage of people murdered has risen by over 1500%. Although Mexican citizens are the main victims in this tragic scenario, Dr. Guadalupe Correa-Cabrera firmly believes the responsibility to fix things lies at the door of both countries. The cartels need guns. The majority of those guns come from the United States. “We need more formal co-operation between our two countries,” she says. “The Mexican government is doing what it can but it has limited resources and equipment. We also need more training, training that the USA could help with.” With most the local, state and federal police in the cartel’s pockets, the government has turned to using their military forces to squash the violence. “It is a double-edged sword though,” Dr. Correa-Cabrera says. “The military know how to fight effectively because they have fought wars in Central America. But they move into terrain and situations blind. They have no intelligence of the area in which they are going.” She describes a recent foray of troops into Chihuahua. The troops were stationed in Mexico City and sent into Chihuahua with no knowledge of the terrain, or the people they were going against. It did not end well, for anyone. “This is a detriment and this is where the USA can help us. Intelligence training is essential.”

“Our government has not learned from its mistakes,” Dr. Guadalupe Correa-Cabrera maintains. “The way of the world has changed and the Mexican government has not caught up with it.” With elections a year away, Dr. Guadalupe Correa-Cabrera predicts that the PRI might come back into power again. “They maintained stability for 70 years so many citizens, who are getting tired of the violence, think they will vote for the PRI once again. But even if they are voted back into power, the political field has changed. The government can no longer centralize like they used to. And the current government is at a disadvantage because of how quickly the world has globalized.”

“We need to face this problem head-on,” Dr. Guadalupe Correa-Cabrera says in conclusion of the phone conference. And facing it she is. With people like Dr. Guadalupe Correa-Cabrera with her Ph.D. in political science at the New School for Social Research (New York City) and Bachelor’s degree in Economics at Universidad Iberoamericana (Mexico City) and her ongoing input into governmental policies at the helm, Mexico and America might see a lessening of the violence and a greater co-operation between the two countries.