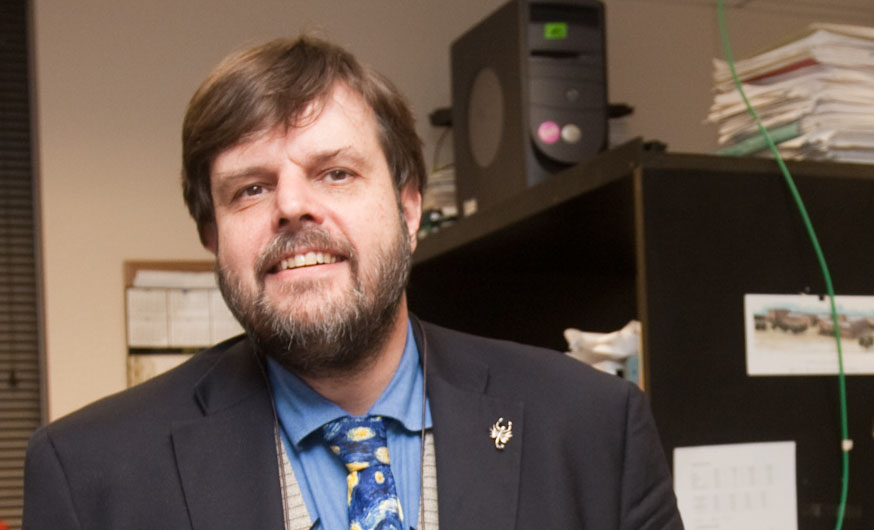 Dr. Luis V. Colom grew up in Uruguay and developed an interest early on in research and science.

“I really began to try to understand the brain at an early age,” he said in September 2012.  “I really was excited about why certain species lived longer than others, and why can’t we prolong life, and can we make a life healthier?  I was reading a lot of material that my father, who was a professor at the university, was getting, and I got to really thinking that maybe I could be a researcher.”

The University of Texas at Brownsville is remembering Colom as a visionary, a mentor to students and colleagues, and for his commitment to research and the university.  Colom, the Vice President of the Division of Research and Dean of the College of Nursing and Dean of the College of Biomedical Sciences and Health Professions, lost his battle with cancer on Thursday, March 27th of this year, at his residence surrounded by his loving family.

A service celebrating Colom’s life was held at UTB in early April.  Dr. Alan F.J. Artibise, Provost and Vice President for Academic Affairs, made note of a jar of almonds atop the podium, signifying Colom’s desktop jar of almonds that he shared with everyone.  After the service, attendees ate Colom’s favorite foods of brisket and pistachio ice cream.

“Luis always felt an urgency to his work: an urgency to find a cure for Alzheimer’s disease and other debilitating diseases, an urgency to build capacity for the research through grants, an urgency to recruit the best students and launch them towards careers of their own,” said Dr. Juliet V. Garcia, President of The University of Texas at Brownsville.  “Because of this, Luis accomplished so much during his time with us.  But it was always with deliberation, care, and attention to detail.  His work was grounded in compassion and a need to help his fellow man.”

“Luis accomplished so much during his time with us.”

Colom’s presence loomed large in the Biomedical Sciences and Health Professions Building with his second floor laboratory and his office across the courtyard in the Division of Research.  During Fiscal Year 2013, he had more than $8 million in active research grant funding as a principal investigator, according to the University Research Awards Data Fiscal 2013 report from the University’s Office of the Vice President for Research.

Dr. Emilio Garrido, Assistant Professor of Neuroscience and Gene Therapy in the Department of Biomedicine in the College of Biomedical Sciences and Health Professions, said he would remember Colom’s efforts to expand biomedical research opportunities for students as a way to engage them in immersive learning experiences.

“Luis is a historical figure, this is a fact, and we will always remember him and his legacy in neuroscience and in this University,” said Garrido.  “But for his friends, he will be forever that simple person always smiling with a positive spirit and attitude in life.  So for me, he will always be here, because every time I remember him, he is alive, no matter if not physically, but he is alive.”

Osiel Perez, 20, a sophomore biomedical sciences major from Brownsville and a graduate of Lopez High School, said he would remember Colom’s humbleness, mentoring, and uplifting yet constructive criticism.

“When I needed guidance as a freshman, he opened doors to a whole new world for me,” said Perez.  “He gave me the amazing opportunity to be part of his Alzheimer’s research laboratory and helped change the world.  Through this lab, I was further introduced to the new biomedical program, to which I applied and got accepted.  He was a man who portrayed character, enthusiasm, leadership, and above all, love for his friends and family.”

“He gave me the amazing opportunity to be part of his Alzheimer’s research laboratory and helped change the world.”

Dr. Cristina Bañuelos, a 2006 UTB master’s degree in biology graduate and a 2014 graduate of the College of Medicine at the University of Florida with a doctoral degree in neuroscience, said Colom believed in the potential of all his students.  She dedicated her dissertation to him because of his mentorship.

“He will never see my dissertation dedication page, but I can picture the grin on his face if he had,” said Bañuelos.

Dr. Hugo Rodriguez, Assistant Professor in the Department of Biomedicine, said Colom always fought for the betterment of his students, staff, and the University.

“Luis was one of the people that just gave and gave everything without expecting anything in return,” said Rodriguez.  “He was one of those people who was simply kind, sincere, and affable, someone who truly loved life.  It is very difficult to know that I can’t go to his office today and sit for a little bit, to take a bottle of water from his mini-fridge or steal his almonds.  But I also know that today that his suffering is gone, and he’s no longer suffering.  Today there’s peace.”

“He was one of those people who was simply kind, sincere, and affable, someone who truly loved life.

Dr. Eloisa Tamez, Associate Professor in the College of Nursing, said she admired Colom’s brilliance, humility, and optimism and his way of making people feel comfortable.

“He persevered until you could arrive at a workable solution and find some peace,” said Tamez. “I frequently would run into him at the HEB on Central Avenue.  He would be going all over the place looking for things, as he was obviously not very familiar with the layout.  He will be missed.”

The family requested memorial gifts to support student scholarships in memory of Colom be made to
The University of Texas at Brownsville, 1 West University Blvd.,
Brownsville, Texas 78520.