The number one thing about becoming a doctor is to do what is best for the patient. Everything else takes care of itself.

Part visionary, part community leader, as well as the premier blade-free intraLASIK eye surgeon in the Rio Grande Valley, Dr. Peña has built a practice that combines just the right amount of marketing savvy, state of the art technology, and a genuine spirit of compassion into the business. 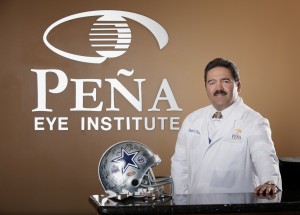 “My parents have always told me to treat others as you would want to be treated. That’s with everything. It also holds true in medicine,” said Peña, who is the Valley’s official IntraLasik Surgeon for the Dallas Cowboys and specializes in premier blade-free Lasik and cataract surgery.

It’s a philosophy that he has carried since the age of six, when a dream of becoming a doctor combined with his love for community and America’s Team. Growing up in a bicultural community and especially Tom Landry-era Mission has shaped a life-long love for the Dallas Cowboys, and the opportunity to fulfill a dream.

The dream is a truly unique career that would find him not only occasionally on the sidelines at game time, but give him the opportunity to medically treat his heroes.

Today Dr. Peña is the Medical Director of his award-winning private practice, The Pena Eye Institute, located in the City of McAllen, a city in constant growth and a center of commerce serving South Texas and Northern Mexico. Voted as one of America’s Top Ophthalmologists by the Consumers Research Council of America, Dr. Peña’s breakthrough ophthalmologic procedures have been featured on numerous television shows and media outlets.

Peña is a proud member of the American Academy of Ophthalmology, the American Society of Cataract and Refractive Surgery, and a member of St. Paul’s Church in Mission, TX

It’s a success story he attributes to years of hard work, and most all to family, his four children, Suzie, Stephen, Alexandra, Samantha and especially his wife Suzanne who have helped shaped the philanthropic arm of Peña Eye Institute.

From donating cataract surgeries free of charge to deserving patients, or holding a yearly Dallas Cowboy festival to support the World For Children Foster Care Foundation and Vannie Cook Children’s Cancer Center, giving back to the community is a family affair for Peña.

“My family and I have been trying to help everyone we can along the way,” Dr. Peña said. “So you see a lot of commercials, you see a lot, but there is a lot more going on that is between myself, God and my family. I feel that I am lucky and fortunate and blessed to be doing what I love to do, and that is helping as many people as I can. 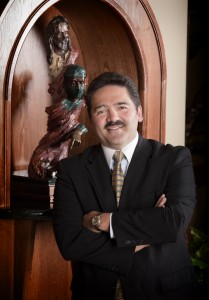 Peña employs only the latest technology to help his patients. From conductive keratoplasty surgery, which uses radio frequency energy to reshape the cornea to improve focus, to intraocular lens implants used to treat patients who suffer from cataracts, there is a wide range of “non-cutting” edge technology available, according to Peña, referring to the use of the blade-free intraLasik procedure he promotes at his practice.

Peña’s office is also the only location south of San Antonio to utilize Technolas Perfect Vision Advanced Control Eyetracking (ACE) Technology, a state of the art tracking rotational system that adjust during surgery, which he has been utilizing this year.

“The visibility aspect is like everything else. Here we are. We have a machine. We have the latest technology. It costs a lot of money to try and do that,” Peña said. “I have patients who come here and say ‘Well doctor, I can get it done in Mexico for cheaper.’ And I tell them, well you know, we live in America, you have that option

“Isn’t it great that we have that option to do that,” Peña said about patients who are considering to go south of the border for treatment. “You can go over there; you can do anything you want. The only I tell them is, if somebody says ‘Go over there, it’s the same.’ Well, it’s not the same. It’s absolutely not the same. There is a difference between LASIK and intraLASIK.” “At the Pena Eye Institute we don’t settle for anything less than the latest technology available today.” added Peña

LASIK involves using a blade to cut the cornea, and using a laser to reshape it. IntraLASIK, which emerged in 2004, uses lasers throughout the whole process.

“We use a laser that’s very precise to create the flap, much safer and much more precise so you can see better. Then, we use a second laser to reshape the cornea so you can see the best,” Peña said. “If you’re content. If you say ‘I’m doing just great’. If you’re not always striving to get better, you’re not going to be the best.”

For Peña, the Valley has played a significant part in making him the best he can be at what he does.

He currently sits on the Board at Doctors Hospital at Renaissance, and is on the hospital’s marketing committee. He has also been recognized as one of McAllen’s top-5 small businesses in 2010.

“When I was a kid, I would often hear people say they needed to have to go to Houston or Dallas for medical care, but I made it a point to have the absolute latest technology here in the Valley so we don’t need to go anywhere else.  That’s what I’ve done,” Peña said. “You can look through that window and see; in my opinion there is nobody else who has anything better in the world, because there isn’t anything better.” 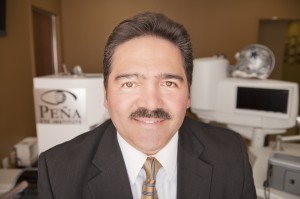 Peña’s skill and technology have also made an impact on an international scale, and has performed thousands of procedures on Valley residents, and elite clientele alike. Beginning with Keith Davis, a former safety for the Cowboys, and onward through at least 11 other NFL players and many of their family members.

“I feel very fortunate to be able to do that. And you go and meet a lot of people but you know what, we’re all the same. They just happen to do different things. You have this big idea when you meet someone saying ‘Wow, look at this guy’ but you know what, in the eyes of God we’re all the same. It’s not that I am not impressed, I am with everything they have been able to accomplish but the only thing I try to do is strive to get better and try and help everyone we can.”