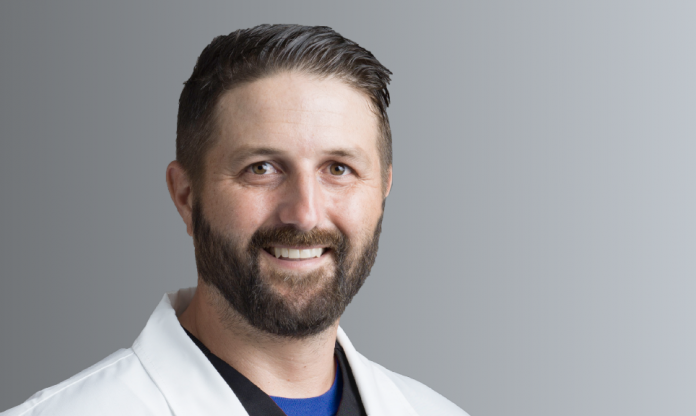 Dr. Ross Chapel didn’t grow up in the Rio Grande Valley. In fact, the southern Louisiana native might never have come to South Texas if it were not for a devastating storm and the love of a McAllen woman.

“I am truly blessed. I get to do what I love, which is helping people. I really have the best job in the world,” he said. “I’m living the dream. I love my patients, and I love the culture here in the Valley.”

But it took Dr. Chapel leaving his native New Orleans ahead of a historic disaster to embark on his medical studies and put down roots in South Texas.

In 2005, Hurricane Katrina was bearing down on the Louisiana coastline, and Dr. Chapel, who’d wrapped up his undergraduate studies at Louisiana State University months earlier, was preparing like everyone else to head to higher ground.

“It had been my dream to go to LSU medical school, but Katrina changed that in one terrible day,” he recalled. “They didn’t know if LSU medical school would be open, so I did what I thought was best for my career and came to Texas for my medical training.”

The storm would ultimately bring Dr. Chapel to Houston, where he fell in love with Texas, the college, and his future bride. His life was changed forever.

The Louisiana native, who came from a long line of doctors, never had to look too far to find a great role model. His grandfather, father, and brother are all chiropractors who, for decades, have helped their patients deal with and recover from various forms of musculoskeletal pain in the human body.

“I was surrounded with musculoskeletal pain my entire life,” he said. “I watched my dad doing this while I was growing up, and it appealed to me.”

He knew he wanted to be involved in the healthcare profession, so he enrolled in medical school at the University of Texas Health Science Center in the fall of 2005 and began taking anatomy classes.

At about the same time, he began dating a medical student from McAllen who would eventually become his wife and introduce him to life in South Texas and the Rio Grande Valley.

“During my anatomy classes in medical school, I fell in love with surgery,” he said. “Injuries and biomechanics just kind of drew me to surgery.”

Challenged by the complexities of orthopedic health, Dr. Chapel focused his efforts on learning how to treat injuries to the body’s upper extremities, such as the shoulders, wrists, elbows, and hands. It became his passion, and he hit the ground running.

“I traveled all over the nation learning from some of the top doctors and professionals in the field of shoulder, elbow, and hand surgery,” Dr. Chapel said. “I kind of picked up some tips and tricks and the right way to do it.”

Dr. Chapel, who is the only fellowship-trained shoulder surgeon south of San Antonio, said the Rio Grande Valley really didn’t have a true shoulder specialist until he arrived and opened his practice in 2016.

Dr. Chapel said some invasive surgeries can take as little as an hour, with the patient spending a day in the hospital before being discharged to go home.

“The best surgeons in the world taught me, and I do it just like they do it,” he said, referring to his expertise as a shoulder surgeon. “I have done hundreds — maybe even thousands — of these surgeries.”

Dr. Chapel treats patients of all ages, from the injured child to the adult with debilitating arthritis that prevents them from living life to the fullest.

“I just love my patients. It’s an honor to care for them,” Dr. Chapel said. “I love taking an injured patient because it’s so catastrophic to them. One day they are normal, and the next thing you know, they can’t perform their jobs … or enjoy their hobbies, or the things they enjoy doing, and fixing them. Pain is so debilitating to these patients, and it can alter their quality of life.”

Are you having pain? Are you interested in receiving cutting-edge treatment from a double fellowship-trained orthopedic surgeon right here in the Valley? For more information, visit www.upperextremityspecialist.com or call (956) 992-0404.