Over the last 20 years, Dr. Cardenas said he has witnessed the start of a historical shift in healthcare for the Rio Grande Valley.
The healthcare arena in the region has become a place where hospitals have developed an understanding of the community it serves, Cardenas says. Hospitals have become malleable, moving in a direction to help communities in various ways. 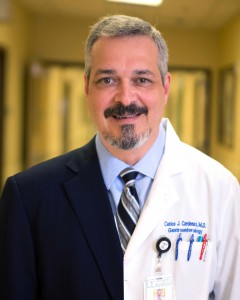 But it hasn’t always been this way. For decades, access to healthcare was sorely needed in the region.
Cardenas can recall the heartbreak growing up when he would see patients traveling to San Antonio for medical care. Some of those patients would never come back. Cardenas’ great-grandfather had Bright’s Disease and died in a San Antonio hospital. His grandmother was diagnosed with Hodgkin’s Disease at MD Anderson in Houston, and his younger brother who passed away two years ago this month was diagnosed with spinal muscular atrophy at UTMB in Galveston.
“Do you see a pattern here?” Cardenas asks. “This is just within my own family. My story is repeated over and over again throughout our community.”
Coming from a pioneer family, Cardenas can trace his lineage in the Valley back more than 250 years on his father’s side, and nearly 200 years on his mother’s side. His dad’s family, the Cardenas-Garcia clan, settled in the area in 1740, and the Cardenas-Cavazos family came in 1789. His mother’s side includes the well-known Vela family, which includes a current U.S. congressman, among many others, who settled in the region around 1825.
“So, we have been here a long time, and that has shaped how I think in the sense that growing up, we didn’t have a lot of subspecialists in our community,” Cardenas said. “We had primary care, we had maybe a couple of general surgeons, but a lot of people left the area to get their healthcare.”
“Many patients would travel to San Antonio, and they often died there,” he said.
The Valley is severely underserved from a medical standpoint. The national average is 240 doctors for every 100,000 patients. In Texas, the rate is decreased to 165 for 100,000 patients, but in the Valley there are 124 doctors for 100,000 patients. In Starr County, there are 27 doctors for every 100,000 patients.
“Historically, this area has been underserved for generations,” Cardenas said. “If it wasn’t for the infrastructure that our local leaders and others built in the area to make it possible for those of us in the community to go off but come back and give back to our community, some of the transitions that we are now absorbing, in terms of being able to attract, recruit, and retain healthcare talent into our community might not have happened.”
“It happened because those forward-looking visionaries and leaders saw the path to attract and make folks come here. I come from that perspective.”

Communities at Risk
Fourteen of 28 counties in South Texas have no hospitals, which translates to residents traveling longer distances in order to receive care. This fact is especially critical in emergency situations, according to the Texas Department of State Health Services.
The designated South Texas region, which spans from Brownsville in the south to Val Verde County in the north, has been met with an increasing number of health care workers in South Texas, “which is still not enough to meet the needs of a rapidly growing population,” according to TDSHS.
The U.S. Department of Health and Human Services has designated 16 of the region’s 28 counties as having a shortage of primary health care providers – primary care doctors, dentists, and mental health professionals.
Primary care doctors are in short supply in more than half of South Texas’ counties, according to TDSHS. Primary care practitioners include doctors of medicine (M.D.) and doctors of osteopathy (D.O.) who provide direct care in general or family practice, general internal medicine, pediatrics, and obstetrics and gynecology.
Three South Texas counties – Kenedy, McMullen, and Real counties – had no practicing direct care physicians as of August 2007.21 Families seeking medical care must travel to other counties, often many miles away.
“There are challenges that we have that are not just unique to us, because some of those are held in common with other communities. I like to call them ‘communities at risk,’” Cardenas said. “Those communities are those that are primarily poor, and in many cases, they are minority communities. These communities exist in every area of our country – in the large urban centers, the rural parts of the state, and the rural parts of America. The challenges are similar, because we tend to see similarities in those communities that are poor.
“There are some who have served or worked in similar areas, but then moved to our area, then bringing the skill sets that allow them to work here,” Cardenas said.
The South Texas region is home to 24 for-profit hospitals, 9 nonprofit hospitals, and 7 public hospitals. Of the 40 hospitals, 7 are in Corpus Christi; Laredo, Brownsville, McAllen, and Harlingen each have four, and Edinburg has three. The remaining 14 are in smaller communities, according to the Texas Department of State Health Services.
The region’s largest hospital is CHRISTUS Spohn Hospital in Corpus Christi with 1,049 beds. McAllen and Harlingen had the next largest hospitals in the South Texas region. In 2007, the region’s hospitals had a total 6,721 staffed beds, according to TDSHS.
Doctors Hospital at Renaissance opened its doors in 1997 as an ambulatory surgical center in Edinburg. The hospital is now the largest physician-owned hospital in the country, Cardenas said.
“Doctors Hospital at Renaissance grew out of an idea that we could deliver high-quality, cost-effective patient care, and who better than physicians to do it?” Cardenas said. “I have been the chairman of the organization from the time it was a surgical center, and then it transitioned to an acute care facility, and now it has transitioned into a large medical center. I think that being a physician has made it possible to think about how care is delivered from the bedside to the boardroom.”
Currently, DHR is a 506-bed facility with over 50 specialties and subspecialties. Dr. Cardenas is also a practicing gastroenterologist.
“We here at the hospital don’t see ourselves as just healthcare delivery. Rather, we see ourselves as an economic driver, an engine for development in our community,” Cardenas said. “It goes beyond just being healthcare service or being part of the healthcare sector. It goes way beyond that, because the needs of our community are great, and it takes all of us, regardless of our profession or perspective or view, depending on what we do in our community, to come together and pull together as a team to drive this entire area forward.”