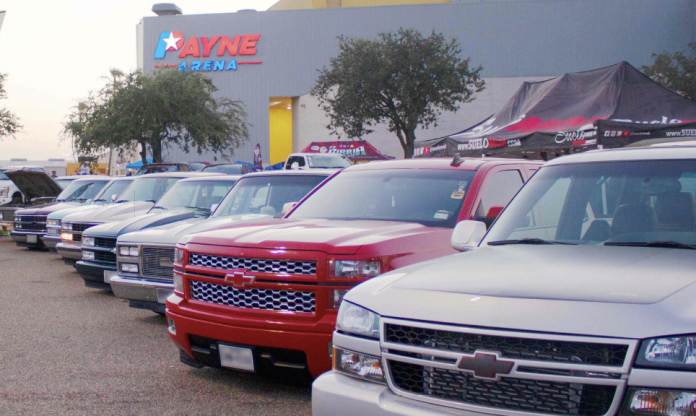 If you’ve ever seen a loud truck with a shiny paint job, usually with a decal to mark a crew or family name, you’ve experienced Trokiando culture. Some people joke about the practice, but others appreciate the camaraderie, friendship, and fun that comes with the hobby of customizing and showing off a decked-out pick-up truck.

The Valley is always a little different than the rest of the world. While car culture is a nationwide hobby, the Rio Grande Valley and Northern Mexico love their trucks — dropped trucks. 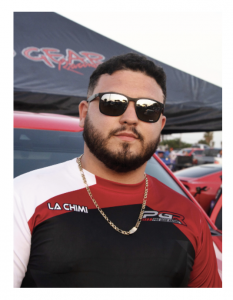 Luis Chavez is a member of Pro Gear Racing. The group participates in events and will enter trucks in races at Edinburg Motorsports Park.

“I’ve always been involved with trucks; I’ve always liked the low trucks, the speed, the adrenaline. It just looks nice when you get in a little group with five or 10 trucks,” Chavez said. “It feels good when someone turns and gives you a thumbs up when someone admires your ride.”

He stressed right away that he and his peers follow the rules. Trokiando culture, similar to car and street racing culture, often gets a bad name because of stereotypes and stories of illegal racing and activities.

So why is truck culture such a good fit in the Valley? It connects Mexican with modern culture on both sides of the river.

“In my point of view, it’s because we’re Mexicans, and we just like that stuff,” he said with a laugh. “We’re getting more involved in the look and style.”

Style, music, and clothing are a big part of what makes this more than a hobby but a deep and growing culture.

Events are key to building strong connections with fellow truck enthusiasts and fostering community around the interest, like the Valluco Throwdown Car & Truck show that took place in July at Hidalgo’s Payne Arena.

Chavez says this is what makes the scene grow.

“The simple fact that you have a tint with the crew name, your family comes out. Everyone wearing the same crew shirt looks so nice,” he said. “The gathering, having a cold beer on a 100-degree day, and walking around enjoying other types of trucks.”

Chavez says the most common trucks out there are GMC or Chevy. He’s more of a Ford guy. 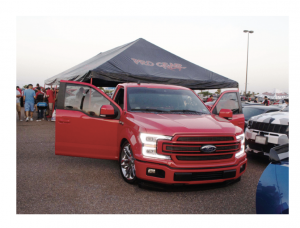 “And you don’t see too many Fords,” Chavez said. “Not a lot of people know how to build Fords, but when you get it done right, it’s really nice. Most of the parts you find online, but more shops are offering more of the products. There’s a shop that only paints; there’s some that only put audio systems. As it seems to be growing here in the Valley, now these shops are purchasing all the stuff you need.”

Chavez says the scene is growing more than ever, especially with youngsters straight out of (or still in) high school owning and dropping trucks.

“It’s insane; it’s rocking high right now,” he said. “I’m only 26, but I remember when my older brother was into it. It was big then, but now you see kids only 15 or 16 years old coming out with trucks. Back in the day, you wouldn’t have a truck until you had a license. I’d rather them do that than do bad stuff on the streets.”

Chavez did admit that there can be issues in the community, but lawbreakers don’t respect the movement.