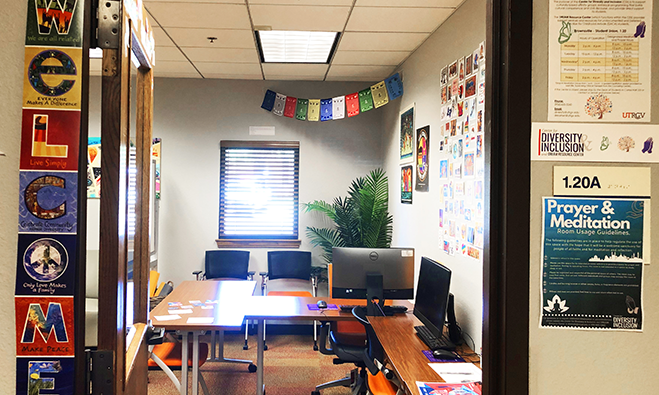 With an undocumented and DACAmented population of around 900 students, the University of Texas Rio Grande Valley community saw the need to create a location on campus where non-residents could receive support services.

In November 2017, more than 200 protestors walked out of class to march around the UTRGV Edinburg campus demanding the creation of a DREAM center. This march took place following an announcement by President Donald Trump that the Obama-era Deferred Action for Childhood Arrivals program would be rescinded.

However, a number of courts challenged the decision and a nationwide injunction allowing the program to continue was issued.

DACA was established in 2012 and has provided work authorization and protection from deportation for 670,000 immigrants who: were born after June 16, 1981, arrived in the U.S. before the age of 16, and have lived in the country since June 15, 2007. These individuals are often referred to as DREAMers.

Following the walkout, the UTRGV Student Government Association began meeting with other school organizations to discuss passing a resolution for the DREAM center. In April 2018, the resolution was approved. Late into the fall 2018 semester, UTRGV’s Center for Diversity and Inclusion and DREAM Resource Center opened its doors.

Aleman, 20, has lived in the U.S. since the age of 1 with a visa. After it expired a few years ago, she wanted to apply for DACA, but by the time she and her family began meeting with an attorney to discuss the application, the program was no longer available to new applicants.

As an undocumented student, it was important for her to pitch ideas on what she thought would best help other students in her situation.

“I thought if we want to help out the undocumented and DACAmented students … why don’t we have this and this and this?” Aleman said. “One of my concerns was helping people find money, because a lot of these scholarships and grants require residency.”

In addition to answering questions about financial aid, Aleman said she looks forward to other support services the DREAM Resource Center can offer.

“There are times — especially when they announced DACA was terminated — that I didn’t really have anyone to talk to it about or ask questions,” she said. “So I think that the center is a great resource for me and others to use.”

Jose Aaron Hinojosa serves as the program coordinator for the Center for Diversity and Inclusion and DREAM Resource Center and says the center helps serve as a liaison between undocumented and DACAmented students and other school resources.

“Most of the questions that come through my attention are ‘how can I come to college here?’ or ‘who can I talk to about my admissions and financial aid?” Hinojosa said. “So we’re kind of like the middle person to connect people because sometimes they don’t feel comfortable asking at UCentral because other people are around and it’s not as private.”

In addition to connecting students to campus resources, Hinojosa has helped launch several programs out of the center, including networking socials, DREAM Zone Advocate Training, and, most recently, discussion panels.

The DREAM Zone advocate training is a four-hour workshop that students, staff, and faculty can attend to learn how they can support and empower UTRGV’s undocumented and DACAmented population.

“We offer some terminology, history on immigration policy, and we try to provide personal stories of current students or alumni,” he said. “The other part is we invite departments and offices on campus … to talk about how they specifically assist students who are undocumented or DACA.”

According to Hinojosa, 200 individuals, mostly faculty and staff, have completed the training. Upon completion, the individual has the option to have their directory information posted on the UTRGV DREAM Zone Advocate webpage to let students know that they want to help.

As DACA is only a temporary protection and there is currently no path to citizenship, the future of DREAMers remains uncertain. Regardless, Hinojosa says he, the 200 DREAM Zone Advocates, and others from the university remain committed to supporting DACA and undocumented students as best as they can.

“There are certain things a university can do and cannot do, but this is one thing we can do,” Hinojosa said. “So having a DREAM Resource Center is not the only answer, and it should not be the only place on campus for students to feel safe or welcome or included, but it’s a good start.

“We’re always learning, I think, that through working together alongside one another just equals a better community.”